What It’s Like Being a Female Filmmaker in Zambia 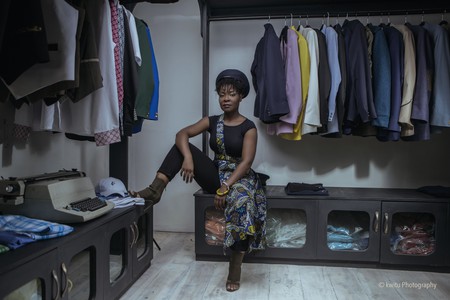 In late February, Zambian-Welsh director and scriptwriter Rungano Nyoni won the award for Outstanding Debut by a British Writer, Director or Producer at the British Academy Film and Television Awards (BAFTAs) for her film I Am Not A Witch. Nyoni’s win was applauded by Zambians, including by female filmmakers who seem to be making strides in the film industry. Here is what it’s like being a woman in Zambia’s film industry.

Ngosa Chungu is a filmmaker known for her debut film e18hteam, which tells the story of the 1993 Zambian national soccer team that died in Gabon enroute to Senegal for a World Cup qualifier match, as well as the national soccer team that won the Africa Cup of Nations in Gabon 19 years later. Chungu decided to create a film about this fascinating story, but faced many challenges such as, “not being taken seriously, doors slammed in my face but opened when I took my father along when raising funds for e18hteam, sexual harassment, navigating the cliques, and on a personal level, sacrificing my global family in order to pursue my passion in my country.” Chungu eventually entered into a partnership with a company called Zambeef who funded the conversion of archival footage to higher quality.

Nancy Handabile—an actress and director of Master Cook (a variation of Master Chef) and Tizibika, a mockumentary that airs on Zambezi Magic Channel on the Digital Satellite Television (DSTV)—shares similar sentiments in terms of challenges. “Asserting yourself [as a female director] is harder than male directors because women ought to be ‘motherly’ so the crew balk at your authority. It’s harder if you have producers or clients who don’t understand these dynamics.”

Chungu’s e18hteam went on to be screened at the Cannes International Film Festival cinema event in 2015 and won several other awards, such as the Paneka Audience Award at the Offside Festival in Spain in 2014 and the Best Documentary Feature Film at the Silicon Valley African Film Festival.

Other successful female filmmakers in Zambia are Jessi Chissi who has directed and written films such as Between Rings, which follows the journey of professional boxing champion Esther Phiri. To encourage young Zambians to take up filmmaking, Chissi created the Zambian Short Film Festival to reward young actors and their productions. She also runs the Young Cinema in Zambia program, which offers lessons in acting, production, direction, and script writing. According to the Zambia Short Film Festival Facebook page, she has “trained more than 150 young, aspiring filmmakers, of which up to 90 percent found employment.”

Chissi currently co-directs a telenovela called Zuba with Becky Ngoma (a fellow successful filmmaker who has written and directed TV series Fever among many other productions), which airs on the Zambezi Magic channel and is broadcast in Zambia, Zimbabwe, Namibia, Malawi and other countries in southern Africa. Zambezi Magic provides a platform for film and television series makers to showcase their productions.

“Zambezi Magic has been great at supporting female filmmakers whose work aligns with their vision and the kind of programming they are looking for,” states Ngosa Chungu. “The success of shows like Zuba and Tizibika can only open more doors for anyone, and particularly women, to believe that they have somewhere to start from.” However, as an independent filmmaker, Chungu recognizes that there are differences. “If you are doing something independently you really have to be passionate about it and be willing to pound the pavement for as long as it takes. As I work independently I am struggling once again to find money that will respect the integrity of my work. It’s hard but worth it. I create what I do because I don’t sell out. We are getting there. It is ultimately worth the price I pay getting there. I am excited about this new chapter I’m about to embark on creatively.”

Chissi’s biggest dream is “to see the Zambian film industry grow and become a sustainable industry, as well as achieving gender balance where women and young people can take up all of today’s male dominated tasks. Film is a strong tool that women can use to tell positive stories and change their narrative.”

Nancy Handabile reinforces the statement: “Women directors tell stories with multi-layered characters because we usually frame the stories in the way we see the world or how we want to see the world.”