Africans in Space: The Incredible Story of Zambia’s Afronauts 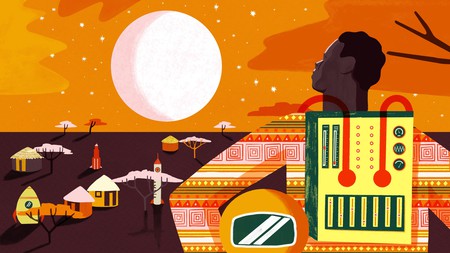 In October 1964, Zambia celebrated its status as a newly independent country. At the same time, a school teacher was working on a project to make Zambia the first country to send a human to the moon.

Edward Makuka Nkoloso was a primary school teacher who, after being inspired by his first experience in a plane, set up the The Zambian National Academy of Science, Space Research and Philosophy in 1960. In Zambian-British writer Namwali Serpell’s 2017 article for The New Yorker titled The Zambian “Afronaut” Who Wanted To Join The Space Race, it states, “When the pilot refused to stop the plane so that he could get out and walk on the clouds, Nkoloso made up his mind to enter the space race.”

Nkoloso recruited a group of young Zambians as cadets to complete a training program that involved rolling down hills in oil drums and walking upside down. A 17-year-old girl named Matha Mwamba, along with Nkoloso’s dog Cyclops, were the first two selected to go to the moon.

To secure the funding required for the space mission, Nkoloso wrote letters to the United Nations Educational, Scientific and Cultural Organisation (UNESCO), Israel, the United States and the United Arab Republic. His requests for financial support were declined from all of them, yet Nkoloso remained optimistic about his mission coming to fruition. He wrote, “Zambians are inferior to no men in science technology. My space plan will surely be carried out.” In an interview with the Associated Press, Nkoloso is quoted as saying, “I’ll be laughing the day I plant Zambia’s flag on the moon.”

But the trip to the moon never happened. Nkoloso blamed Mwamba falling pregnant and several cadets abandoning the project for the mission’s failure.

The Zambia Space Programme, however, inspired a 2012 book and photo exhibition titled Afronauts by Italian photographer Cristina de Middel. The exhibition opened at the Dillon Gallery in New York and subsequently Amsterdam, Miami and other cities. In 2013, a documentary titled Nkoloso: The Afronaut was uploaded to YouTube by a24media. In 2014, Ghanaian filmmaker Frances Bodomo’s short film Afronauts was released. It is set in 1969 on the eve of the Apollo 11 launch. Bodomo is about to begin production on a full-length version of the film.

Locally-based Zambian artists have also been inspired by the Zambia Space Programme. Visual artist Stary Mwaba had an installation at the Künstlerhaus Bethanien in Berlin, Germany called Life on Mars. According to the gallery’s website, “Besides drawings, sketches and paintings based on materials in the Zambian national archives, Stary Mwaba is showing the sculpture DKALO-1 (2015), which reflects Nkoloso’s model of a type of space capsule: it is a large-scale balloon encased in typical bright-patterned, local materials.”

Visual artist and sculptor Aaron Samuel Mulenga included a piece titled Mwamba The Afronaut in a 2017 exhibition at Modzi Arts gallery inspired by the 17-year-old girl who was meant to be sent to the moon. In a Zambia Daily Mail article published in November 2017 titled Pioneering Afrofuturism Through Art, Mulenga is quoted as saying, “Nkoloso was the brains behind the project but there is little mention of the woman. In this work, I am highlighting the important role the woman played in the venture, representing the feminine boldness and making the woman part of history.”

With regard to what became of Nkoloso after his failed space project, he was named a special representative to Zambia’s first president, Kenneth Kaunda, at the Africa Liberation Headquarters, which was a hub for members of freedom movements from Mozambique, South Africa, Zimbabwe and Angola. Towards the end of his life, he worked on the Copperbelt region of Zambia. He died on March 4, 1989.