An Introduction to Zambia's Lozi People 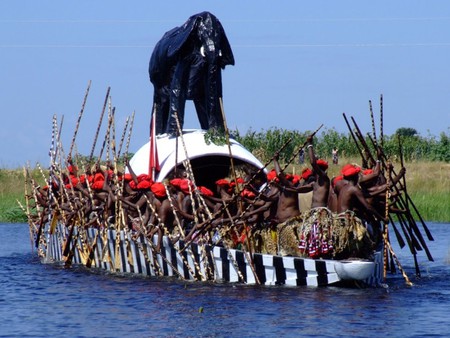 Members of the Lozi tribe in their Nalikwanda boat, a symbol of kingship | © Dietmar Hatzenbichler / WikiCommons

The Lozi tribe of Western Zambia are a proud people with a complex history. They are the only tribe in Zambia with a King instead of a chief, and account for approximately 900,000 people. This is an introduction to Zambia’s Lozi people.

According to myth, the Lozi tribe began when the sun god Nyambe descended from heaven onto Barotseland, which is the Lozi homeland. He came with his wife Nasilele (the moon), and together they began the line of Luyi-Luyana kings. Before ascending back to the heavens, they left their daughter Mbuyu to continue the line of leadership through her male offspring.

Another account of the creation of the Lozi tribe is that they came from the Lunda Kingdom in present day Democratic Republic of Congo, and were led into Western Zambia by a Lunda princess called Mbuywamwamba between the 17th and 18th centuries. This was during the Bantu Migration from which other Zambian tribes such as the Bemba also moved into Zambia.

The historical account is that the Lozi were originally called the ‘Luyi‘ (meaning ‘Foreigner’) and spoke a language called Siluyana. They lived in Bulozi, a plain in the Upper Zambezi. In 1830, the Luyi people were conquered by the Makololo tribe under a leader called Sebetwane, who was part of many tribes that escaped the Mfecane, a series of wars under the Zulu king Shaka from present day South Africa. The Makololo changed the Luyi’s name to ‘Lozi’, which translates to ‘plain’. Although the Makololo were overthrown in 1864, the Luyi kept their new name.

It was believed that Barosteland had copper, gold and other minerals, so Cecil Rhodes, a colonialist figure known for his dreams of building a road from Cape Town, South Africa to Cairo, Egypt convinced the Litunga (the King – known by the name Lewanika) to sign over mining rights to Rhodes British South African Company under the Lochner Concession of 1890. Barosteland then became a British protectorate with the Lozis offered protection from neighboring tribes interested in conquering the Lozi. Barotseland became part of Northern Rhodesia (now known as Zambia) in May 1964, five months before Northern Rhodesia became an independent nation. 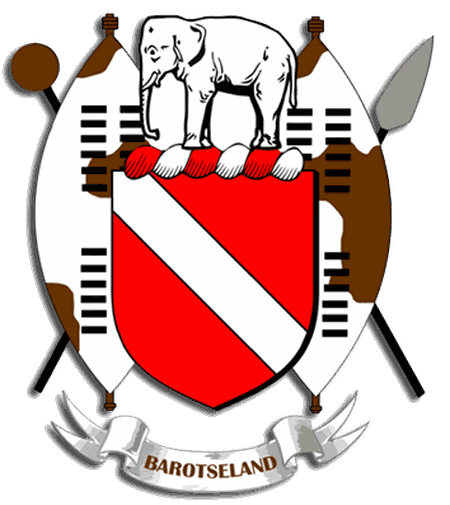 The Lozi are mostly concentrated in the Western Province of Zambia, although they are also based in smaller numbers in the Caprivi strip of Namibia, Botswana, Mozambique and Zimbabwe. The Lozi homeland is called Barotseland, and was once considered to be an independent kingdom with its own flag. The administrative capital is called Lealui, and the winter capital is called Limulunga – the towns are separated by a distance of approximately 11 miles (17.7 km). The town of Mongu is the political capital and is approximately 10 miles (16km) west of Lealui.

The Lozis show respect through a practice called likute. According to the essay ‘Moonlight and Clapping Hands: Lozi Cosmic Arts of Barosteland’ by Karen E Milbourne from the book African Cosmos published by Stellar Arts, it is “the performance of politeness, deference and cooperation… Its most visible feature consists of Lozi men and women clapping their hands in respect to one another, their leaders and the divine”. When members of the Lozi tribe meet the Litunga, they put their arms in the air, recite tributes and kneel several times as a form of respect.

The Litunga is known as the ‘holder of the earth’ which is a literal translation of his name. This means all land in Barotseland belongs to the King, and his subjects are granted permission to live on the land. The Litunga is ruler of all Lozis. Under him is his prime minister, the Ngambela. The indunas or councilors are under the prime minister. 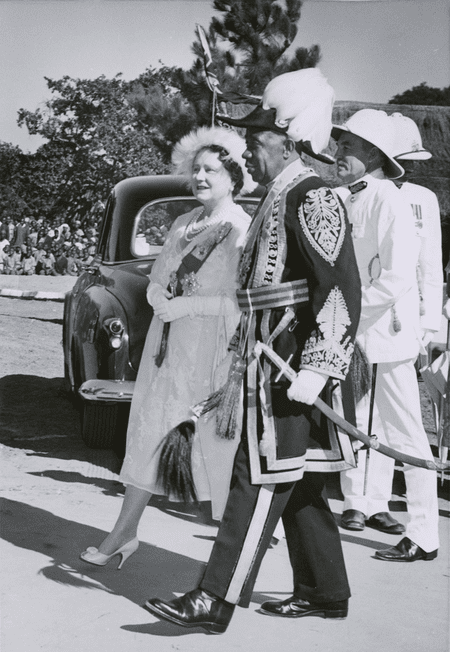 The Lozis celebrate the Kuomboka ceremony annually in March or April at the end of the rainy season. It is one of the most popular traditional ceremonies in Zambia. ‘Kuomboka‘ translates to ‘get out of the water’ and involves the Litunga, his Queen and a number of their subjects moving from his residence at Lealui which floods annually, to Limulunga. The journey is a spectacle to watch, with the royal barge called the Nalikwanda (meaning ‘for the people’ which referred to the fact that the boat could be used by anyone, although later it came to be only used for the King) drawing attention with the large model elephant on the top. The Queen travels in a separate barge. The night before Kuomboka, the King beats a royal drum called the maoma which is a call to able-bodied men from the kingdom to prepare to escort their king. “Up to 120 men in leopard skins, red berets and lions manes to lead a flotilla of barges, banana boats and dugout canoes across lilly-studded waters” (Milborune, African Cosmos).

Other drums that are played during the Kuomboka include the manjabila, lishoma, mwenduko, mutanga. “Manjabila is played in the Nalikwanda to give praises to the former leader of the canoe makers, and it alternates with maoma. Andlishoma is played up to the second landing at the harbour of Limulunga. Mwenduko together with mwatota and ngw’awawa (xylophones) are played while Nalikwanda is leaving. Mutango is played early in the morning to confirm to the people that the Litunga or Litunga la Mboela (The Queen) will not spend the night in Lealui or Nalolo. Firstly it will be played in the courtyard and thereafter at Namoo” (Barotse Royal Establishment, Kuomboka Ceremony, 2008: 14-15).

Members of the Lozi tribe in their Nalikwanda boat, a symbol of kingship | © Dietmar Hatzenbichler / WikiCommons

The Litunga’s traditional attire is called sikutindo, which is worn when boarding the royal barge. He also carries a namaya which is a fly whisk. He then changes into his other royal attire, a black and gold British admiral’s uniform which is said to have been given to the Litunga who was ruling in 1902 by King Edward VIII in recognition of a treaty that had been signed between the Lozis and Queen Victoria.

Male members of Barosteland (the Lozi kingdom) wear a siziba – a skirt which is red, black and white chitenge (a cotton print fabric usually with bold patterns). They wear a matching waistcoat and red beret called a lishushu. The women wear a satin outfit called musinsi which consists of two skirts , a top called a baki and a small wrapper called a chali.

Women and men from the Lozi tribe sometimes wear ivory bangles which are given at different points in life such as birth, puberty etc.

Another way to learn about Lozi culture is to visit the Nayuma Museum which is located opposite the Litunga’s palace in Mongu.

Outfits at the Union of Souls 3/3 👁👁👁👁👁👁👁 Traditional Lozi attire ⚡️ this is the only chat Uncle Arthur even knows ca'av the face tryna keep the smile low key coz the slay too high key!! 🐉🐉🔮

The Lozi sometimes name their children after former royal leaders. For instance, the name Matauka is usually given to a female child and was the name of the Queen whose brother was the Litunga from 1875 – 1885 and 1886 – 1916. Nasilele is also a common female name and refers to the wife of Nyambe (the sun god) who according to myth founded the Lozi tribe.

Traditionally, the eyes and mouth were kept open at the point of death. Men were buried facing east, while women were buried facing west. The dead were buried with their personal possessions as it was believed that they would be needed in the afterlife. According to the kwekudee-tripdownmemorylane blog, “The grave of a person of status, which is situated to the side of the commoner s cemetery, is surrounded by a circular barrier of grass and branches. As sign of grief, the kin of the deceased wear their skin cloaks inside out. The hut of the deceased is pulled down, the roof being placed near the grave, while the remaining possessions of the dead person are burned so that nothing will attract the ghost back to the village”. The funeral for a deceased King is a more elaborate affair.

The Lozi perform a variety of dances based on occasion. During a girl’s initiation, a dance called siyomboka is performed. It is also the name of the conical drum that is used during the occasion. During royal occasions such as Kuomboka, men and women perform different dances. The ngomalume is a warrior-style dance performed only by men. It “demands skillful co-ordination of steps and the abdominal movements” (Agrippa Njungu, Music of My People (II): Dances in Barotseland). The liwale is performed by women at royal events. Other dances include the liimba, lishemba and sipelu, which is the most popular.

Like the myth of the creation of the Lozi tribe, there are many others. One of the most fascinating is the myth of the Lengolengole, a creature with the head of a snake and lizard-like feet that lives in the Zambezi river and was said to have been spotted by a Litunga in the early 20th century.

According to a Food and Consumption Report titled ‘ The Common Zambian Foodstuff, Ethnicity, Preparation and Nutrient Composition of selected foods’ by Drinah Banda Nyirenda, Ph.D., Martha Musukwa, MSc. and Raider Habulembe Mugode, BSc, the Lozi ethnic grouping occupy and control access to the floodplain with its potential for cattle production, fishing, wetland/floodplain agriculture (rice and maize), and harvesting of foodstuffs from the natural fauna and flora of the floodplain. The preferred fruits of the Lozi are exotic fruits. Apart from local fruits such as mumbole and namulomo which are preferred for their good taste, the local fruits that are most preferred by the Lozi people are those that have several uses such as mubula, which is used for making porridge, scones called manyende, and a drink known as maheu. Nuts are added as an alternative to groundnuts. Muzauli is added to relishes as an alternative to groundnuts or as a source of cooking oil, and mukuwa may be made into a drink.

The staple food of Zambia nshima is eaten by the Lozi as well, although it is called buhobe.