9 Traditional Festivals in Zambia You Have to Attend 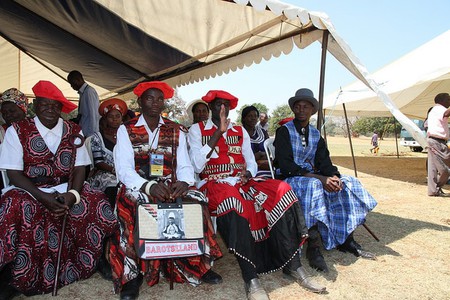 The 73 tribes that co-exist in Zambia celebrate their heritage by hosting traditional festivals throughout the year. These are the ones you shouldn’t miss.

The name Kuomboka translates to “get out of the water” and the traditional festival of the Lozi people of Western Zambia involves the King who is called the ‘Litunga’ and his wife moving from their summer home in Lealui to Limulunga. They travel in two separate barges with the King’s being the larger of the two. His barge, which is called ‘Nalikwanda’ features a model elephant on the top and is rowed by specially chosen members of the tribe. His subjects and visitors line the shores of the Zambezi river clad in their Siziba and Musinsi (Lozi traditional attire) to welcome their leader after his six hour journey. To attend the Kuomboka, fly into Mongu via Proflight then self- drive to the harbor to catch a boat to Lealui.

Tip: If you book a stay at the King Lewanika Lodge during the time of Kuomboka (April), you might catch a sight of the royal barge as it travels down the Zambezi.

The Likumbi Lya Mize ceremony is celebrated by the Luvale people of North Western Province. Historically, the festival marked the re-entrance of boys who had been in seclusion for ‘Mukanda’ (male circumcision) back into society. The four day ceremony features dances from the ‘Makishi’, masked men who are believed to be spirits representing ancestors. Likumbi Lya Mize takes place in August in Zambezi district, North Western Province. Mize refers to the name of the original capital of the North Western province.

The N’cwala ceremony is celebrated by the Ngoni of Eastern Zambia at Mtenguleni village in Chipata. The first crops of the season are blessed by the Paramount Chief Mpezeni. A bull is then sacrified and some of its blood is drained and offered to the chief. Dancing follows and mock fights between the impis (warriors) recreate the various battles the Ngoni fought and won during their migration from South Africa to Zambia. The N’cwala ceremony takes place in February.

What’s it like living in Zambia? Sometimes it’s collapsing on the couch after a tiring work day and staying there until it’s a socially acceptable time for an adult to go to bed. And other times it’s feeling your chest pulse from traditional tribes chanting and singing and clapping as they battle it out against rival tribes in a district dance contest! So, I guess I’d say fairly mixed? 😜🐘🌿🌤🇿🇲 #somedaysaremoregrammablethanothers #helloreallife 💖🌿👌🏼

The Lunda and Luba people of Luapula province celebrate their pre-colonial victories with the Umutomboko or Mutomboko ceremony. The two day ceremony begins with Mwata Kazembe (the Chief) visiting various sacred places within and outside his palace. The day concludes with subjects presenting gifts to the chief who is covered in white powder. During the final day, the chief performs the ‘Umutomboko’, the royal dance. For this occasion, he is dressed in a long blue, white and red skirt called a ‘Mukonzo’, a crown and in his hands he carries an axe and sword. As he dances, his assistant who holds his Munkonzo keeps up with him. The ceremony concludes when the chief is carried back to the palace. Subjects and visitors continue the celebrations with traditional brew and drumming. The Umotomboko is held on the last Saturday of January every year.

Tip: While in the Luapula province, a trip to the Ntumachusi, Kabwelume and Lumangwe Falls is worthwhile.

Tip: While attending the ceremony, it is forbidden to greet the Mwata Kazembe or hand him gifts directly.

The Soli people who are the original inhabitants of Lusaka province commemorate the Chakwela Mukumbi ceremony in Chongwe, a town approximately 25 miles from Lusaka city center. The name of the festival translates to “pulling the clouds”, which refers to the role of the Chieftainess Nkomeshya II who prays to the ancestors for rains so as to start the farming season. Highlights of the festival include the burning of a small area in the royal field and planting new seeds. The rest of the ceremony includes dances performed by different cultural groups that make up the Soli kingdom. Chibwela Mushi takes place during the last weekend of October.

‘Ukusefya Pa Ngwena’ is the traditional festival of the Bemba people of Mungwi district in Northern Province. It renacts the migration of the Bemba tribe from Kola (modern day Angola) to their current village. The chief whose title is ‘Chitimukulu’ is escorted from his palace on a throne which is a couch with a paper mache crocodile on the front. The crocodile is an important totem to the Bemba tribe, as legend states that when they migrated into Zambia, they reached a site with a dead crocodile which they took as a good omen and so settled there. Like other traditional festivals, Ukusefya Pa Ngwenga features dancing, drumming, singing and consumption of traditional food and beer. The ceremony takes place in August.

The Lenje people of Chibombo district in Central Province celebrate the Kulamba Kubwalo traditional festival. The pre-ceremony lasts a week and features dancing and displays of traditional foods. On the day of the Kulamba Kubwalo, the Chief whose title is Senior Chief Mukuni Ng’ombe is escorted from his palace to eight different sites that represent the stops that were made by the Lenje tribe during their migration from present day Democratic Republic of Congo to Zambia. The chief also visits the Likonde Lya Bankanga shrine, which is the burial ground of the queen mother of the Lenje tribe. The rest of the ceremony features visiting chiefs and subjects paying tribute to the Mukuni for his leadership, as well as drumming, dancing, eating and drinking. The Kulamba Kubwalo ceremony is held in October.

Shimunenga, the name of the traditional festival celebrated by the Ila people of Namwala, Southern Province pays homage to the warrior Shimunenga who led the tribe and their cattle to the Kafue flats after a dispute with his brother. The three day festival includes a day reserved for the women to sing and perform traditional dances such as ‘kukonkobela’. On the second day, the women throw sticks at the men to symbolize spears thrown at Shimunenga’s brother. The third day is a cattle drive day with cows competing to cross a section of the Kafue River. Shimunenga is held in August.

During the Kulamba ceremony of the Chewa people, subordinate Chewa chiefs from neighboring countries Malawi and Mozambique pay homage to the Paramount chief Kalonga Gawa Undi at his capital in Mkaika located in Katete district of Eastern province. After the chiefs have given their status reports on their various chiefdoms, there is dancing by newly initiated Gule Wamkule who are a masked society of dancers. The Kulamba ceremony takes place in August.