The life and music of singer Aziza Brahim is irrevocably bound to her heritage as a Saharawi native of Western Sahara, a small country sandwiched between Morocco and Mauritania. Born into a refugee camp, Brahim learned how to sing from her revolutionary grandmother, which eventually led to her writing music that speaks out against the oppression of her homeland. Culture Trip takes a closer look at Western Sahara’s voice of resistance. 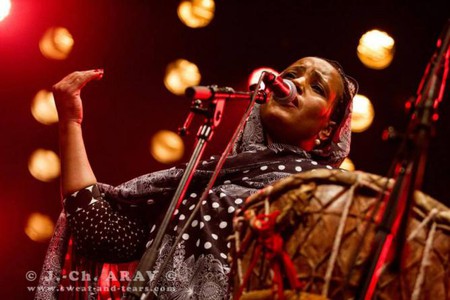 Due to its lack of self-governance, Western Sahara is considered to be the last African colony. Although the country was originally controlled by Spain, when the Spanish ended their colonization of the territory in 1975, Morocco made the decision to take over the area. After the Moroccan invasion, half of the Saharawi population remained in Western Sahara, while the other half was forced to flee to southwest Algeria, where one of the largest refugee camps in the world was established. Brahim was born in the refugee camps in 1976. She never met her father, who remained behind in Western Sahara when the rest of her family fled to Algeria. While living in the refugee camps, she was exposed to the extreme conditions of living with 200,000 other Saharawi who all depended on international aid as a main source of survival, and where temperatures can reach 130 degrees Fahrenheit.

In 1993, a ceasefire was enacted when the Polisario Front, the Saharawi liberation movement for Western Saharan independence, and Morocco agreed to end the war and hold a referendum. This would allow the Saharawi to have a chance to vote for self-governance or integration with Morocco. However, 20 years after the ceasefire, and 40 years after the start of the war, the referendum still has not taken place.

While growing up, Brahim was greatly influenced by the many musicians in her family including her grandmother, Al-Kadra. Known as the “poet with the gun,” her grandmother was one of the most influential female poets in the camps and has been referred to as the symbol of freedom and resistance. Brahim was encouraged by her family to compose poetry for her grandmother and later perform with her. In 1987, aged 11 Brahim received a scholarship to study in Cuba, but in 1995 she went back to the camps after she was no longer allowed to study music due to her scholarship requirements. 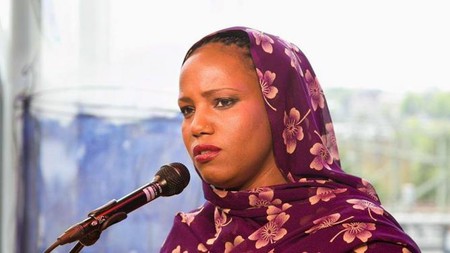 After going back to the camps, Brahim’s music career began to take off. She won first place at the annual National Culture Festival, a music festival organised by the Saharawi Minister of Culture in the camps. After winning, Brahim joined the National Saharawi Music Group, a group dedicated to representing Saharawi music through tours around Algeria and Mauritania. In the same year as her collaboration with the Saharawi Minister of Culture, two of her songs became hits when they were released by the Spanish label Nubenegra as a part of the album “A Pesar de las Heridas,” a record intended to celebrate Saharawi music by releasing songs by various Saharawi artists. Her talent was then discovered in 1998 by the popular Saharawi group Leyoad who invited her to join them. This allowed her to travel to Spain, France and Germany on their European tour.

Upon her return from Leyoad’s European tour, she began to record music with various Tuareg musicians for the Saharawi National Radio. Thousands heard her music and she began her rise to fame soon afterward. In order to further the growth of her music career, she moved to Spain, where she began to compose her own songs and tour around the country. In 2007, she began her first international collaboration with the Spanish-Latin jazz band Yayabo. A year later, she founded the group Gulili Mankoo, which brought together singers and composers from Western Sahara, Colombia and Senegal. During her time with the group, Brahim’s own style shifted to a focus on blues and rock. 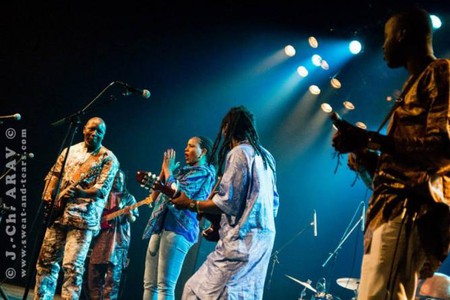 With the collaboration of Gulili Mankoo, Brahim released her first album, Mi Canto. The album was produced by Brahim, but it was released worldwide by the French label Reaktion and was soon ranked number one in the World Music list. Some tracks, like the title, are in Spanish, while the other songs are sung in a mix of Spanish and Hassaniya, an Arabic dialect that traces back to Yemen and is spoken mainly in Western Sahara and Mauritania.

In 2009, Brahim’s international collaborations continued to expand. She recorded the song “Interrapcion – Crisol 09” with the Basque rap group Oreka Tx and joined their tours around Spain and France. In the same year, Brahim was also featured in Listen To The Banned, an album dedicated to censored international music, especially from the Middle East and Asia.

In addition to her music, Brahim began her acting career in 2011, in the movie Wilaya, also known as The Tears of the Sand, by the Spanish director Pedro Pérez Rosado. The film tells a story of a Saharawi family trying to cope with the sudden death of their mother, as well as the visit of their little sister who has been living most of her life in Spain. The film accurately portrays the situation of many Saharawi families who have members who leave to study abroad for many years. Brahim not only acted in the film, but also produced its soundtrack. Wilaya received two awards at the Abu Dhabi Film Festival and Malaga Film Festival, including the award for Best Original Soundtrack. Brahim was also given the Freedom to Create Prize, an award given those who use the arts to fight oppression and advocate for the common good of societies. 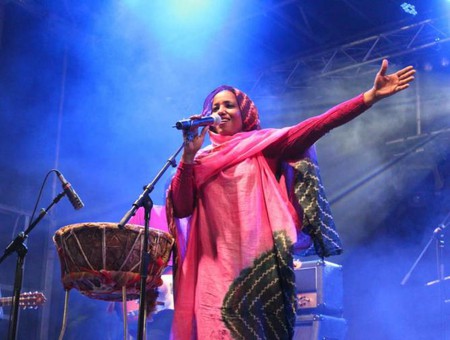 In 2012, Brahim released her second album, Mabruk, which translates to “congratulations” in Arabic. The album was released to honor her grandmother and congratulate her on all of her accomplishments. The album featured the collaboration of the popular Saharawi poet Bahia Mahmud Awah. The Dutch magazine Heaven listed Mabruk as the album of the year. The success of the album landed Brahim a performance in the well-known international festival World of Music, Arts and Dance (WOMAD).

For her other albums, Brahim has used traditional African musical styles such as Wolof and Bambara, with instruments like the djembe and darbuka. Her newest album, Soutak, translated as “your voice,” was released in February 2014 and was dedicated to the events happening in Western Sahara and Mali. In an interview with the blog News and Noise, Brahim stated her reasons to dedicate the album to Mali and her musical influences in the album.

“I have never been there, but Mali is seen as the cradle of the African music,” Brahim said in the interview. “I am as African as Arabian and I can relate myself to what happens over there – the extremists trying to ban the music not long ago – that’s why I want to show my support. Moreover, the music has always appealed to me. I am a big fan of the late Ali Farka Touré. You will hear some influences of the Desert-blues, especially in the song Lagi. The main guitarist on Soutak is Kalilou Sangare from Mali.”

The song Julud mentions her mother and honors all the sacrifices her mother has made for her. In this song, she used the tabal as the main instrument in addition to modern instruments. The tabal is a traditional Saharawi instrument played only by women.

Throughout the nine-track album, Brahim continues to mix Hassaniya and Spanish in her music. For Soutak, Brahim collaborated with the Spanish musicians Guillem Aguilar and Nico Roca, as well as the African musicians Kalilou Sangare and Badra Abdallahe. Throughout the album, Brahim mixes Arabian, Andalusian, African and Latin sounds, which had great influence on her while she lived in each location. The album, produced by Chris Eckman and released by the Glitterbeat Records, was ranked number one no less than twice in the World Music Charts Europe (WMCE). The success of Soutak landed her an appearance on the TV shows Later with Jools Holland in the UK and Vrije Geluiden in Amsterdam, along with interviews with dozens of international magazines and blogs. 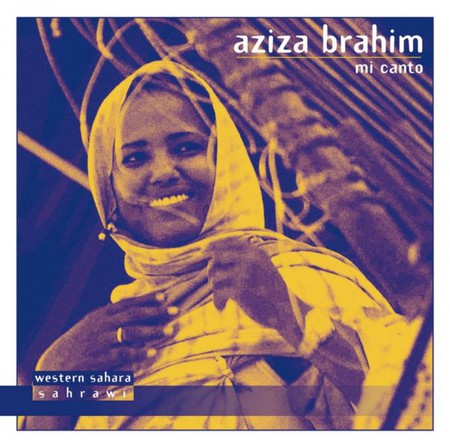 Through her music, Brahim aims to be a voice of resistance. “No, I am not a politician,” Brahim told News and Noise. “I am one of three generations who lives in a refugee camp and I represent my life and music. I feel the urge to give my music a context. The Saharawi live under Moroccan control and we are not allowed to express ourselves culturally. If we don’t protect our culture, our people will vanish. We have an oral tradition. How can we respect ourselves if we don’t have an identity? The lyrics are not only about the Saharawi, but about the suffering of other people as well. There is a global dimension. Every song tells a true story, and it’s not always about politics.”

Brahim feels a sense of responsibility to give an identity to those who face the hardships of the refugee camps and the lack of a peaceful solution to the long-standing conflict between Western Sahara and Morocco. With the combination of the oral tradition of Saharawi culture and the trend of the newer generation going abroad to study, there is a tendency to forget the importance of maintaining the tradition of Saharawi poetry and music. However, by collaborating with Saharawi and international musicians, Brahim has given the Saharawi a name, identity and reputation within the refugee camps and in Spain where most of the Saharawi, who emigrated there to find a better life, currently live. Additionally, she has been influential in Western Sahara, where half of the Saharawi population continues to live under Moroccan occupation, and also abroad, where people from all walks of life are introduced to her passionate voice and diva style of desert blues.