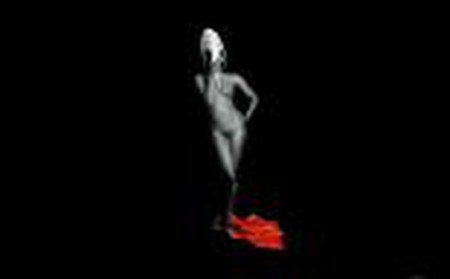 With its very own Kampala Biennale focusing on the best of contemporary African art, Uganda is becoming a fast-growing cultural hub in East Africa. Artists derive influence from their distinctive and rapidly developing culture while harkening to tradition and custom. These ten contemporary artists are some of the influential minds that are carving a space for Uganda in the international art world.

Daudi Karungi is a creative composite: a painter, curator, gallerist, printmaker and fashion designer all rolled into one. A familiar face in the fast-growing Ugandan Artscape, he has created various platforms that endeavour to promote and represent Ugandan artists on an international scale. The AfriArt Gallery, of which Karungi is the director, and START, an art journal that he co-founded, are some of the efforts he has made to exhibit the works of upcoming Ugandan artists and put Uganda on the international art map. He draws inspiration from the daily social and political climate of the country and reflects upon the dichotomies of tradition and modernity, existence and loss.

Wasswa Donald wields a fierce brushstroke; creating evocative, semi-abstract landscapes that feature East African wildlife, of which the elephant is the most distinct. Donald studied at the Kyambogo University, where he specialized in Art and Design. His artistic practices focus on the idea of harmony with nature, and he creates exquisite artworks using paint, pen and ink, mixed media, also dabbling in sculpture, clothing and accessory design. His works can are best described as whimsical and dreamlike, and he uses colors to show the African spirit in all its vibrant glory. Besides being a full-time practicing artist, Donald also founded the Artpunch Studio, which provides a platform for him to work with many creative professionals from various artistic fields. 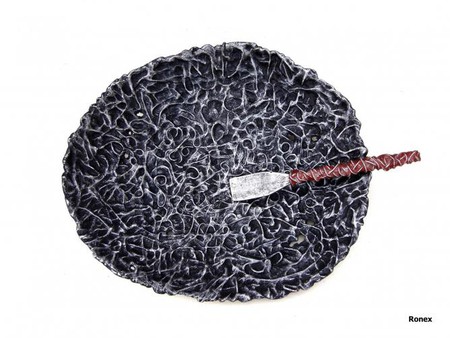 Ahimbisibwe is quickly becoming one of Uganda’s most celebrated creative minds. He doesn’t believe in being restricted by one particular medium, and instead embraces all forms of expression, such as paintings, sculptures, woodcut print, photography and digital art, with equal amounts of enthusiasm and verve. He uses his artwork to discuss themes that are considered taboo in conservative Ugandan culture, such as homosexuality, nudity and corruption. The crux of his artistic ideology is the act of enquiry. He says, ‘it is a joy in itself as one gets surprised by the process and reversal of known truths’. Ahimbisibwe’s and thought-provoking work has garnered his international recognition, and he has had exhibitions in several countries around the world. 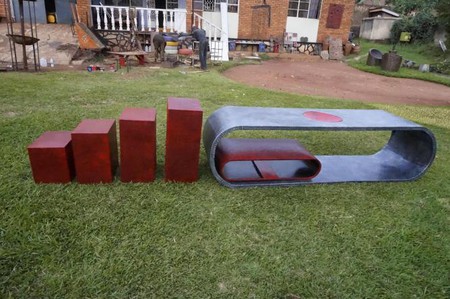 Paul Ndema obtained his art degree from Margaret Trowell School of Industrial and Fine Arts. Since then, he has exhibited extensively and has become a key figure in Uganda’s thriving art scene. While Klimt-esque undertones accentuate Ndema’s work, one can’t help but notice his embrace of traditional Ugandan motifs, such as ekyanzi mike pots and masks. His visual style, manifested by using a variety of diverse mediums, is highly ornamental while avoiding superficial decorativeness. Some of the materials that Ndema utilises in his work are oil, acrylic, ink, kitenge shirts, bark cloth and the nsimbi shell. Ndema’s work is preoccupied with the narrow line between customs and modernity.

Regarded as one of Uganda’s most renowned fashion photographers, Kalungi Kabuye has been working in the upcoming Ugandan fashion industry for the past 22 years. Despite having worked in New York, he now seeks to channel his talent towards finding a unique African aesthetic that brings out the character of his subjects. He is very aware of the vast potential in the Ugandan fashion industry, which has an inimitable style. In addition to fashion photography, Kabuye has also extended his skill set to incorporate photojournalism, creating a photo archive, which has been generated over a significant period. Since 1992, Kabuye has also been writing for the country’s national newspaper New Vision, and is currently the lifestyle editor.

Despite having trained as a sculptress, Maria Naita is as comfortable in painting as she is in moulding wood, copper or metal. She sources inspiration from her environment and her work is infused with a distinct essence of Ugandan culture. It encapsulates her experience as a Ugandan woman, and the female figure is at the centre of her work. Naita also serves as the director of the KANN Artist group, which was founded in 1998. As a part of the KANN, she was commissioned to create the Commonwealth Heads of Government Meeting (CHOGM) monument in Kampala. Naita is an acclaimed contemporary artist who has been exhibited internationally, and her work is found in the collection of leading cultural institutions. 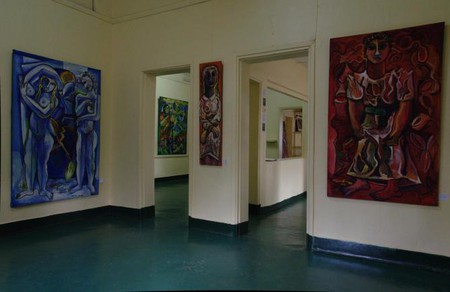 A key figure in the Ugandan art scene, Eria Nsubuga Sane has extensively exhibited his work in Africa, and also internationally in Germany, England, Japan, USA and the Netherlands. While his mediums fluctuate between acrylic, oils, watercolour, canvas and paper, his source of inspiration is consistently his peers. Sane bases his art around the lives of the people he sees around him. The dichotomy between tradition and modernity, the rapid development of Uganda, wildlife, nature, politics all serve as creative fodder for his imaginative mind. Besides being a practising artist, Sane is also a part of the Index Mashiriki Artist group, the Executive Committee of the Uganda Artists Association, Uganda Debt Network and Ngoma Artists.

Ronnie Chris Tindi’s creative boundaries are endless. Initially trained as a draftsman, Tindi’s artistic practice of about ten years goes far beyond just that. He uses colour and form in an evocative way and has familiarised himself with the tenets of Abstraction, Symbolism, Cubism and Dadaism. Tindi has a particular affinity with the motif of the fish, which he views as an icon of transparency. He captures the spirit of Ugandan life in all its diverse facets. Tindi is one of the founding members of the Njovu Studio and has exhibited extensively within Uganda and internationally. 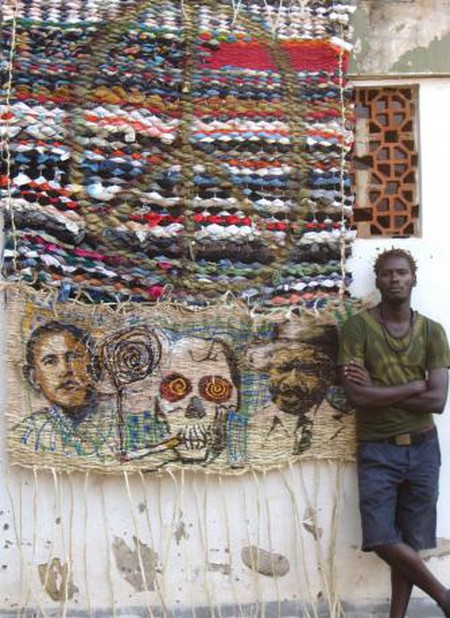 The artist with his work | Courtesy Ronald Kerango

Even though Ronald Kerango specialised in Sculpture at Margaret Trowell school of Industrial and Fine Arts at Makerere University, he has become a prolific artist who is not bound to just one medium. Kerango has made the waning state of the environment his artistic preoccupation. While he celebrates and revels in the beauty of animal and plant life, he also points towards the strained relationship between man and nature. He frequently uses recycled fabric, which he collects from tailors, to form elaborate fabric collages. In the 2014 Kampala Biennale, Kerango will be exhibiting one such site-specific installation made of sisal and fabric. The work appeals for a harmonious relationship between the West and many African nations.

A native of Netherlands, Henk Jonker made the permanent move to Uganda more than a decade ago. Since then, he has lived in Kampala with his Ugandan wife and been more than just a spectator to the daily street life. Using varying mediums like acrylic, oil and ink, he captures the city from a fresh and unique perspective- that of a relative outsider. Jonker’s inarguably refreshing take of the city often enables him to obtain details of the city and parts of the country that often go unnoticed- the smile of an elderly person, the lushness of the vegetation or the chaos of everyday existence.