A Guide to Seeing Chimpanzees in Kibale National Park, Uganda 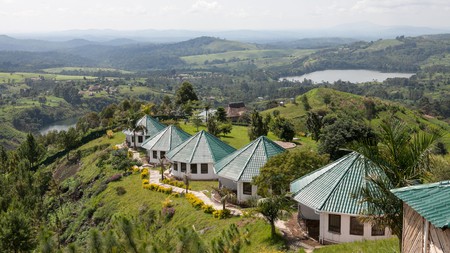 There’s a good chance you’ll spot a chimpanzee while trekking through Kibale National Park, where almost 1,500 of the primates live among its dense, sprawling canopy. Here’s Culture Trip’s guide to improving your chances of seeing one in the wild. 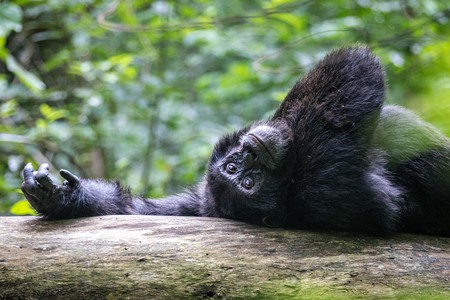 Uganda’s Kibale National Park is home to five habituated groups of chimpanzees, which have become so used to human interaction that a close encounter is likely. Walks through the park leave the Kanyanchu Visitors’ Centre – where the trailheads begin – at 8am, 11am and 2pm. Early in the morning, when the chimps are most active, is considered a better time to track, but there are no guarantees – they’re wild animals, after all.

Before setting off, a member of the Uganda Wildlife Authority (UWA) briefs the group and explains what to expect from a chimp’s behaviour. There are a few ground rules: keep a safe distance, never touch the animals and be careful not to antagonise the primates by mimicking their calls and noises.

Tracking groups are then split into smaller parties of six people – seven including the ranger. The search then begins. Hiking through dense forest with tangled trees and dangling vines, the ranger leads the group to a section of the forest where the chimps were last spotted. 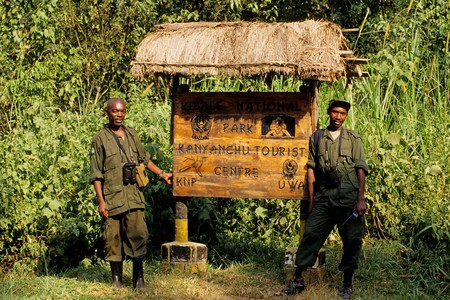 Mostly though, they’re heard first. Their deafening calls echo around the treetops for miles. Part blood-curdling scream, part whoop, it’s an exhilarating indicator that the chimpanzees are somewhere close by. Troops can number well over 100, but they spend most of the day in smaller groups of eight to 15. Most of the time, they are up trees, eating figs and young leaves, sleeping and grooming each other playfully. 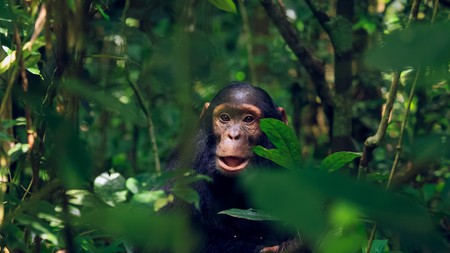 Once a troop is found, visitors have an hour to observe them and sometimes the chimps will even come down to the forest floor for a truly special experience. It’s an unforgettable moment, discovering something completely wild but oddly familiar. After all, some studies have found that humans share up to 98 percent of their DNA with the primates. 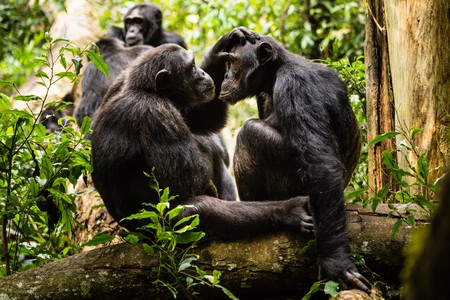 For conservation purposes, chimpanzee-tracking is strictly enforced by the UWA. As a result, obtaining a valid permit is necessary to take part. The permit qualifies as entry into the park and for the guided tracking experience.

Most people arrange a permit as a part of a package, either with a travel agency prior to travel, or a local company in Uganda. It’s also possible to get one directly from the UWA head office in Kampala.

For travellers arranging a trip on their own, proof of travel dates are required to obtain a permit, as they cannot be amended once booked. The permits cost US$150 (£117) in the high season, but drops to US$100 (£78) in low season (April, May and November). Travel arrangements to and within the park must be organised prior to arrival.

A standard permit gets visitors an hour with the chimps. If that’s not enough, sign up for a habituation experience (US$220/£170) in which guests can track, observe and record a group’s behaviour over a two-day period.

What to wear for chimp tracking

Tracking chimpanzees is unpredictable – you could be walking for 20 minutes or three hours before the ranger locates a group. Thankfully, the trails in Kibale are largely flat, and it isn’t too arduous. That said, paths can be uneven, overgrown, and if it has rained recently, slippery. To cover all eventualities, decent walking shoes or boots are a must. 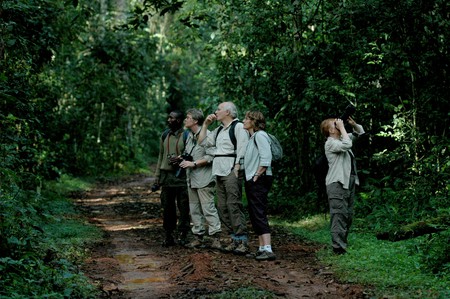 Likewise, the weather in Uganda can change at any moment. Chimpanzees live in dense rainforest environments, so while it might be blazing sunshine to begin with, a torrential downpour can never be written off.

Along with a rain jacket or poncho, long trousers and sleeves are also advisable. Paths are cut with machetes, often leaving sharp edges. Expect to come up against thorns, stinging plants and all manner of insects during the walk.

For good weather, June to July and December to February are the best times to visit. The trails are likely to be drier and easier to walk. These are the peak travel times, however, so don’t expect an hour alone with the chimps – many other people will likely be observing them.

April to May and September to November are the wettest months; while it’s generally cheaper and quieter, lots of rain can make hiking difficult and drastically reduce visibility in the forest.

Helping to protect an endangered species

Since the turn of the last century, wild chimpanzee numbers have dropped dramatically. In the early 1900s they numbered around 1 million, but today that figure is closer to 300,000. One of the biggest threats facing chimps is loss of habitat – it’s estimated that Uganda loses 200,000 hectares (495,000 acres) of forest annually.

To combat the devastating effects of deforestation, the UWA reinvests 20 percent of the tracking permit fees into the local communities that border the park. The organisation also runs regular education programmes highlighting the benefits and importance of conservation. 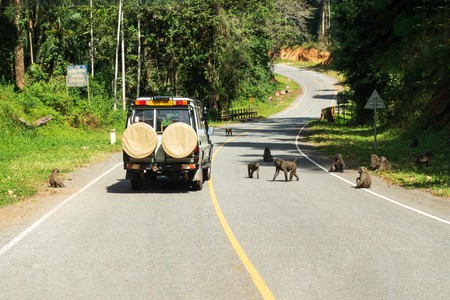 How to get to Kibale National Park

Kibale National Park is 30 kilometres (19 miles) away from Fort Portal, the nearest major town. Most people spend a few days there, using it as a base to track chimpanzees and visit the nearby crater lakes.

To get to the park’s headquarters, Kanyanchu Visitors’ Centre, a private taxi is the best option and can be arranged through any major hotel.

Buses run regularly from Kampala, but expect around an eight-hour journey. Post Bus and Link Bus are two of the most reliable operators running the route. It’s the cheapest way to travel (around US$10/£8 one way), but expect it to be crowded.