The 10 Most Beautiful Towns In Tunisia

Tunisia is famous for its beautiful towns built around an ancient Medina quarter, towered over by minarets and looking out over the Mediterranean. You’ll find some of the best preserved architecture of the early Islamic era in Tunisia, in mosques and palaces that incorporate intricate Arabic calligraphy and Koranic verses on their patterned façades. Places like Dougga and Ghar al Milh hold picturesque crumbling ruins from earlier and later periods to be explored. Here is our guide to 10 of the most beautiful places in Tunisia. 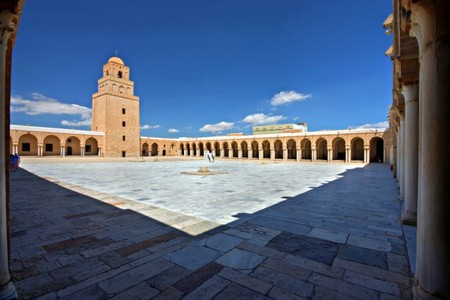 Founded by the Arabs in the year 670, Kairouan in Arabic means ‘military camp’. It was a staging post for the Arabs during the conquests of northern Africa and Spain. During the 9th century, it became home to rulers of North Africa, the Aghlabid dynasty, and under them, Kairouan became a great center of learning and prosperity. Magnificent palaces, libraries, gardens and mosques were built, along with vast water basins that still exist today. The centerpiece of modern Kairouan is the Great Mosque of Sidi-Uqba with its beautiful columns made from porphyry and marble taken from the ruins of Carthage. There are smaller mosques too, including the Mosque of the Three Gates with its façade incorporating decorative calligraphy. The city is a UNESCO World Heritage Site and is regarded by many Muslims as the fourth holiest site in Islam. 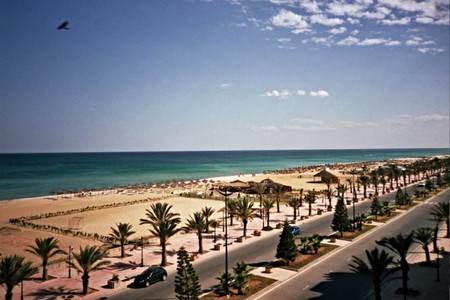 Hammamet lies on the Mediterranean coast in north Tunisia, a popular tourist resort famed for its endless beaches and wonderfully preserved medina. The town has passed through many different hands – Punic, Roman, Islamic, Spanish, Turkish and French, each leaving their own architectural legacy. The seawalls date back to the 13th century, the medina to the 15th and many of the elegant whitewashed houses were built in the era of French rule. Hammamet has attracted plenty of discerning visitors over the years, including Sophia Loren, Winston Churchill and Andre Gide. Most famously it was painted by the great Paul Klee, whose ‘Hammamet with Its Mosque’ of 1914 hangs in the Metropolitan Museum of Art in New York 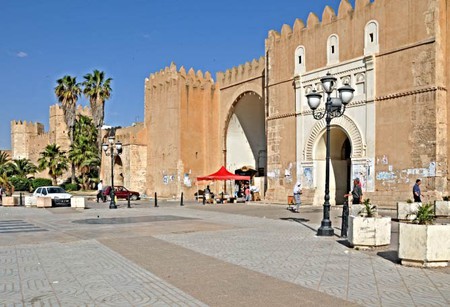 The Medina at Sfax | © Dennis Jarvis/Flickr

Sfax was built on the ruins of two Roman towns on the east coast, as a port from which olive oil grown inland could be transported all over the Mediterranean. It was fought over for centuries by the Normans from Sicily, the Spanish and later became a base for Barbary pirates. Today there is a real French feel to parts of Sfax with wide boulevards and avenues, though the medina is regarded as the best preserved in Tunisia. You’ll find labyrinthine alleys winding their way through souks, past the Great Mosque modeled on that at Kairouan, the Borj Ennar or ‘Tower of the Fires’, and the ancient Kasbah. Despite feeling somewhat haphazard the medina is in fact intricately planned, with souks selling religious incense closest to the mosque and those selling mundane items like leather on the outside for passing caravans. 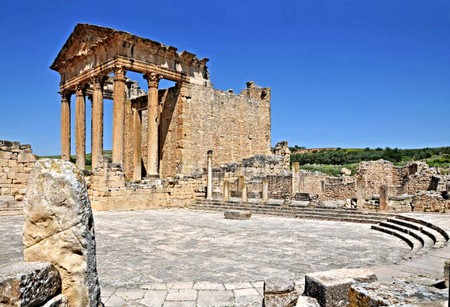 The Capitol at Dougga | © Dennis Jarvis/Flickr

You won’t find anyone living in Dougga; it’s a town of ruins, and the best preserved Roman town in North Africa according to UNESCO. Unlike Carthage which has largely been built over, Dougga lies far from encroaching urbanism in north Tunisia, allowing it to decay naturally to form ruins every bit as picturesque as Paestum or Delphi across the Mediterranean. There are remains of pre-Roman monuments, triumphal arches still standing, and much of a theater that could once have seated most of the inhabitants of the town. The remains of 11 temples have been found, including the excellently preserved Capitol with its portico and pediment still erect. Many of the mosaics that once adorned the villas of Dougga can be seen in the Bardo Museum in Tunis. 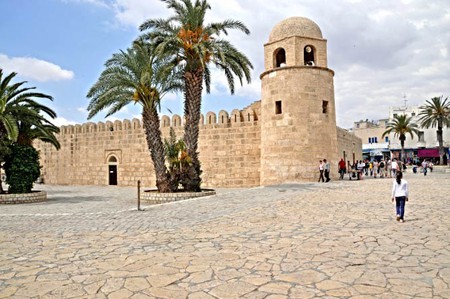 The Mosque at Sousse | © Dennis Jarvis/Flickr

On the Gulf of Hammamet, Sousse looks out on the Mediterranean and is enclosed on the landward side by swathes of olive groves. The ancient medina is a UNESCO World Heritage Site and a favorite site for filmmakers, having featured in the Indiana Jones movies as a substitute for Cairo. Long coastal defenses nestle next to indolently swaying palm trees, and towers and battlements, mosques and souks combine in one of finest examples of North African military coastal architecture. The minarets of the Great and Bou Ftata Mosques soar over courtyards and face the watch towers of the Kasbah and the Ribat, a unique military fortress once manned by holy men. 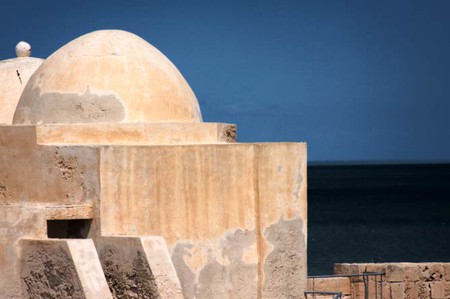 Houmt Souk is the main town on the island of Djerba, just off the south-eastern coast and believed to have been the island of the Lotus-Eaters on which Odysseus and his sailors were stranded. The town and island are rare centers of Berber culture rather than being French or Arabic speaking, and have been home to large Jewish and Islamic sect communities for milennia. Along with successive occupations by Romans, Sicilian Normans, Ottoman Turks and Barbary corsairs, this has left a wonderful legacy of religious and military buildings. The fortress of Borj el Kebir looms over the town, whilst the splendid El Ghriba synagogue with its white and blue arches and porticoes, just outside the main town to the south-west, is believed to date back 1,900 years. 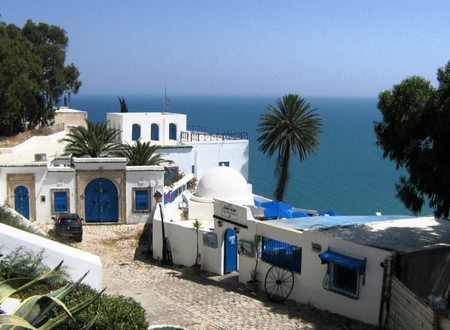 Sidi Bou Said is the classic blue and white sun-soaked Tunisian coastal town, sitting on the north coast and facing out over the Mediterranean towards Sicily. Whitewashed walls are paired with blue doorways embossed with crescent and star motifs. The town was once a religious sanctuary, before it became a pleasure resort for the Ottoman governors of Tunis and in the era of French rule, a magnet for artists and writers. The likes of Simone de Beauvoir and Andre Gide traveled to Sidi Bou Said, along with painters Paul Klee, Auguste Macke and Henri Matisse, all drawn by the brilliant light and vibrancy of the town. 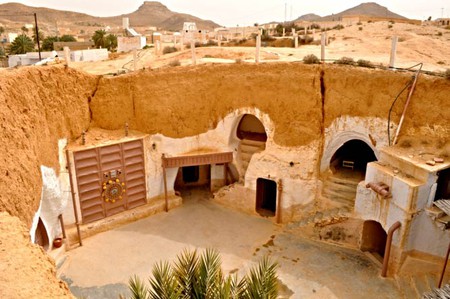 It might seem a cliche to include Matmata, as it is common knowledge that the early parts of the first Star Wars films were shot there. But the underground houses cut into the rocky Hamada desert are one of the most extraordinary and unique sites in Tunisia. The troglodytes of Matmata were barely known until 1967, when the town, not far from Gabes in southern Tunisia, became a major attraction for visitors. Some of the cave houses go down as far as 30 feet and are said to date as far back as the 4th century BC. The Berber inhabitants use earthen steps and rope ladders to make their way between the levels of the caves and use passageways to wend their way between rooms. 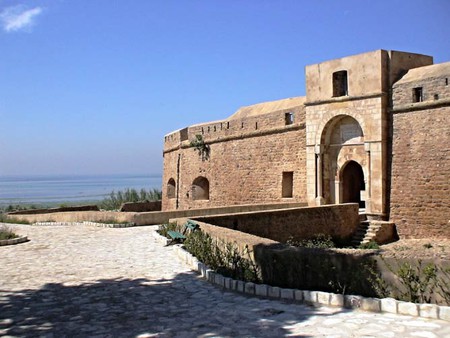 Sometimes also known as Porto Farina, Ghar al Milh lies on the north coast at the head of a lagoon. It’s a well-kept secret that gets few visitors but was once one of the main ports of Tunisia along with Tunis and Bizerte. Back in the 17th century, it was home to a fleet of Barbary pirates until a British fleet destroyed the town in 1655. Since then it has been used by Maltese merchants, manned by an Ottoman garrison and used as a base by French and Italian bootleggers. The harbor silted up over time, preserving Ghar Al Milh as a picturesque town surrounded by relics and ruins of Ottoman fortresses and coastal defenses built by corsairs. 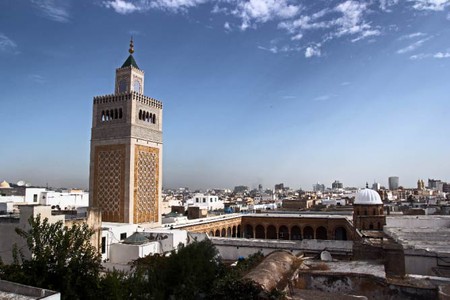 The Medina at Tunis | © grolli77/Flickr

The medina, or old town, of Tunis can’t be left off this list. There’s plenty of modern architecture to see in the capital, including the French colonial buildings of the Avenue Habib Bourguiba, but the old medina is the clear highlight. Spread over 280 hectares, the old town is home to over 700 monuments largely dating to the period between the 12th and 16th centuries when Tunis was one of the leading centers of learning and wealth in the Islamic world. It’s an anthology of Islamic design in the form of mosques, souks, fountains, madrassas, military defenses, palaces and the great medina gates – the Bar Bhab and Bar Jedid.