Plenty of artists have emerged out of North Africa in the modern era. They share a commitment to innovation and engaging with multiple media, an interest in public issues as well as exploring the process of artistic creation itself. Here’s our guide to ten of the most notable artists from North Africa working at the moment for you to check out. 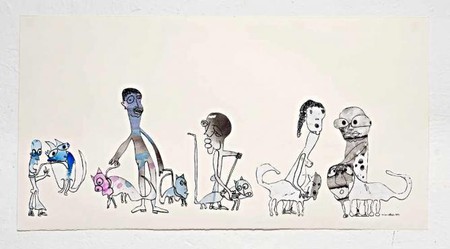 Mohamed Ben Soltane is amongst the most versatile and important figures to have emerged in Tunisia in recent years. He’s both artist and the Artistic Director of the B’chira Art Center, one of the key platforms for contemporary art in Tunisia after opening following the Revolution of 2011. Ben Soltane has worked with all sorts of media, from photography and installations to acerbic comic strip style cartoons. His early works included photographing the walls of Tunis when they covered with doodles and slogans. More recently he’s exhibited in London, Algiers and across Tunisia. His residency in Barcelona gave rise to cartoons like ‘Chiens be Barcelone’, a phantasmagoria of figures all walking their dogs, all mimicking each other’s movements like automata.

The Egyptian Mona Marzouk studied at the Institute of Fine Arts in Dusseldorf and works from Alexandria. She uses sculpture, painting and murals and draws on architectural references like castles and spired cathedrals, well-known imagery like national flags, and mythological creatures and strange zoomorphic forms in her work. Marzouk creates alternate realities, strange semi-recognisable fictions with familiar meanings undermined and warped to make the viewer re-think the values they would otherwise take for granted. In much of her work Marzouk engages with public issues like pollution, waste and global warming. Her work has been exhibited in Turin, New York, Cairo and at the Baltic Centre for Contemporary Art in Newcastle. 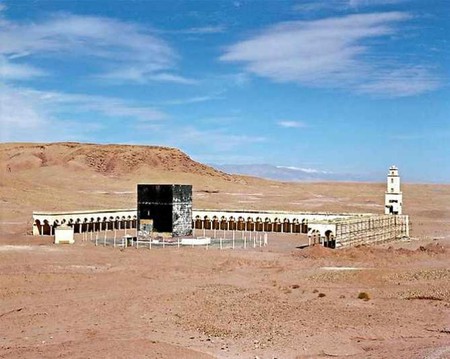 The Algerian Fayçal Baghriche is based in Paris having studied in Nice and the National School of the Arts in Paris. He uses performance art, videos, installations and photography in his work. Typically he uses situations, images or scenarios that are easy to recognise – the Paris Metro, the sky, and imagery from Arabic culture – and plays with them by interposing a different perspective or mode of behaviour over the top. On the Paris Metro, for instance, he recites the achievements of his CV, and he takes an image of the Kaaba in Mecca and places it in the desert. He’s been exhibited in New York, Beijing, Algiers, and at the Contemporary Arts Museum in Houston. Here’s an interview with the artist. 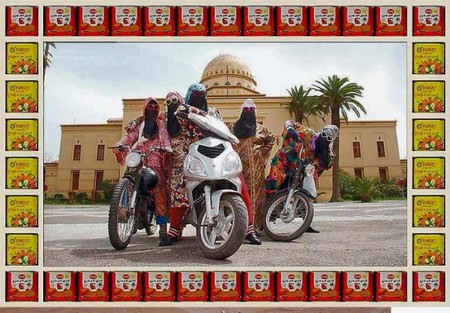 Hassan Hajjaj is known as the ‘Andy Warhol of Marrakech’, his works being heavily influenced by pop art, reggae and hip-hop fashions. Hajjaj started life in Marrakech and spent time growing up in London – the two cities that he still divides his time between. He works with all sorts of media, from found objects and photography to performance art. His interior design for the Andy Wahloo bar in Paris – the name is French slang for ‘I have nothing’ – featured bar stools and lamps made from old Coca-Cola crates and cans. And Hajjaj’s recent photographic work ‘Kesh Angels’ comprises portraits of figures dressed up in clothes he has designed for ironic effect. His works have been exhibited at the Saatchi Gallery in London, the British Museum and the Victoria and Albert Museum. 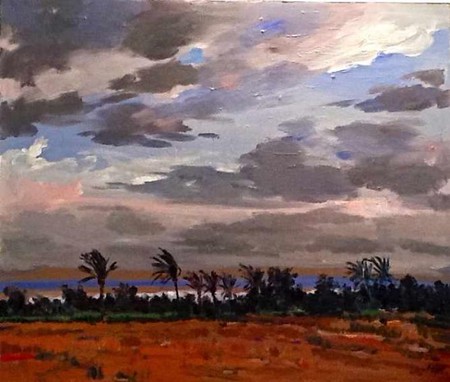 Born in 1953 in Egypt, Mohamed Abla studied in Alexandria before travelling for seven years through Europe. His works have incorporated engravings, sculpture, and installation, but he’s best known for his paintings of landscapes and abstract scenes of Cairene life. In recent years his art has been focussed on documenting the events of the overthrow of the Mubarak regime, and you can read a piece from The Financial Times on his works here. Abla is also the founder of The Fayoum Art Center in Egypt, and of the first museum on the Middle East dedicated to caricatures. His works are held in the British Museum, in galleries in Cairo and across central Europe, and have won countless awards including the Grand Prize at the Alexandria Biennale.

The Tunisian Mouna Karray works with photography, videos and sound installations to play with metaphysical questions like identity, sameness and difference, and memory. Born in the city of Sfax in 1970, Karray studied first in Tunis and then in Tokyo, and her works have been exhibited in galleries and exhibitions held in Paris, Tunis, Frankfurt, Bamako and in the Democratic Republic of the Congo. Her photographic work ‘At the Risk of Identity’ uses twin images of herself and another woman striking the same everyday poses and in the same set of clothes and plays with identity questions. Her 2011 work ‘Noir’ addresses confinement and imprisonment, and the question of remaining creative when in some way censored. In the series of photos the artist appears wrapped in a white sheet, only her hand visible clicking the camera shutter, remaining energised and creative despite constraints. 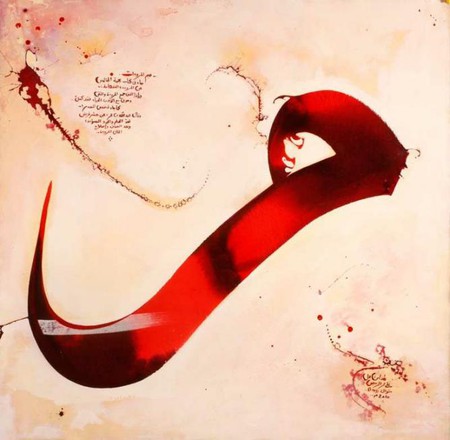 Ali Omar Ermes can lay claim to being the most collected contemporary artist to have emerged from the Islamic world in modern times. Born in Libya in 1945, Ermes is distinguished as an artist, writer and social activist. He studied in England, moved back to Libya and has lived in London since 1981, where he is a leading figure in the promotion of Muslim culture and heritage. His approach to art is unique, using painted canvases of Arabic calligraphy. Sometimes he uses a single letter with a broad stroke, sometimes a phrase taken from the Koran, a quote from a Caliph, or from classical Arabic poetry on a moral question. His works are held by the British Museum, the Ashmolean in Oxford, the Washington Smithsonian and the private collections of the Prince of Wales and the royal families of Oman and Dubai. 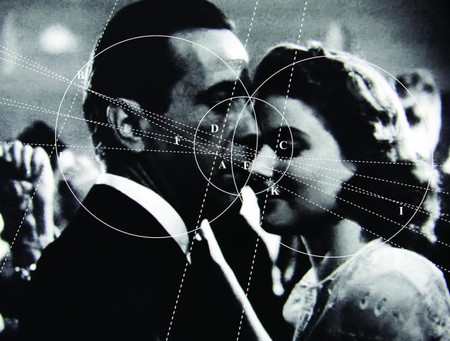 Mounir Fatmi was born in Tangier in 1970 and now works there and in Paris. He uses all sorts of multimedia including video and sounds, collage techniques, sculpture and installations in order to examine the modern world. He takes symbols and objects loaded with historical, religious and ideological significances that are now being lost and plays with them. The death of consumption is a common trope in his work, with old VHS tapes and TV antennae often featuring. He’s been exhibited in Dusseldorf, Geneva, Tate Modern in London, and at the biennials in Dakar, Venice, Houston and Auckland. In 2012 his work ‘Technologia’, a set of Koranic verses within circles inspired by Duchamp’s rotoreliefs, hit the headlines after it was exhibited in Toulouse. It led to a riot by Muslims and the city saw fit to censor the work. 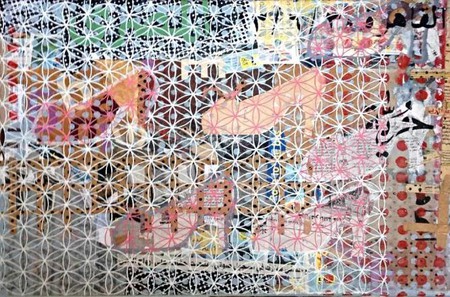 Hazem Taha Hussein comes from a family of artists. His mother was a sculptor and his father a painter. He was born in 1961 and studied in his native Egypt and in Germany. His work is particularly noted for the originality and the technique he uses that combines Oriental and Western influences. Hussein takes Islamic forms and interlacing shapes and overlays them on abstract or figurative images. When the viewer approaches the work they are never entirely sure on whether to focus on the patterned overlay in the foreground or the figures behind. The effect is rather like a camera lens losing its focus and becoming blurred then being re-focused, with something different becoming apparent in the work as long as the viewer sees it. Hussein also holds major positions at the Royal University in Bahrain and at Helwan University. 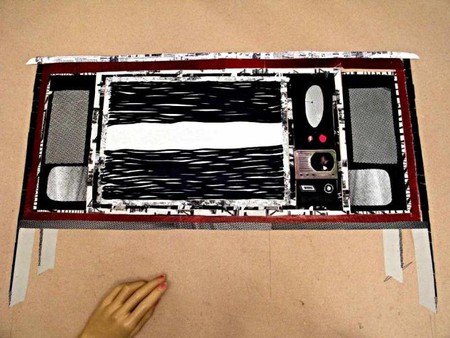 The work of Simohammed Fettaka, born in 1981, is all about the way we consume images and how they sit in the collective and individual consciousness. Rather than the conventional artistic background, Fettaka studied signal processing, philosophy and filmmaking and works today in Tangier and Paris. He’s heavily involved with Cinematheque de Tanger, opened in 2006 in the historic Cinema Rif building, and a platform for Arabic films and rarely seen movies, and founded the annual Cinema Nachia film festival. As well as making films, Fettaka uses collages and sound installations to play with notions of how we present and take in visual images. You can watch more of his films here on his Vimeo page.