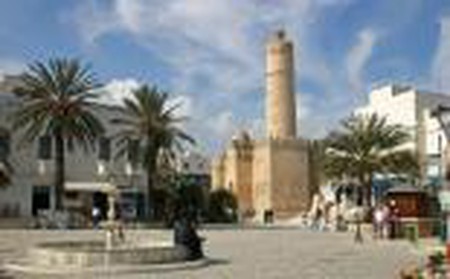 Tunisia’s strategic importance has seen it become the object of conquest for many conquering powers; Phoenicians, Romans, Byzantines, Spaniards, Turks, and the French all left an imprint on its storied terrain and well-preserved sites and ruins remain as monuments to this fractious history. This geographical guide to Tunisia features the best places to stay when exploring the ancient history and culture of this rich landscape. 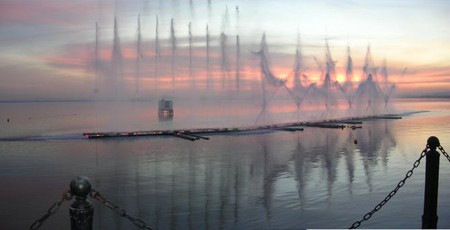 Once one of the Islamic world’s greatest and wealthiest cities, Tunis still contains over 700 monuments, including madrasas, palaces, grand residential quarters, crypts, mosques and fountains. The UNESCO listed area of Tunis is a fine example of an Arabo-Muslim city with its 8th century central medina, 13th century suburbs and imposing military barracks all intact. It is also possible to visit the world’s largest collection of Roman polychrome mosaics at Tunisia’s national museum and archaeological repository, The Bardo Museum. 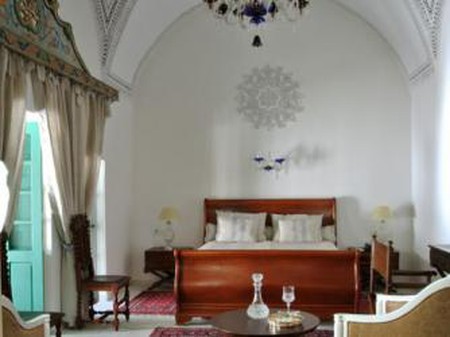 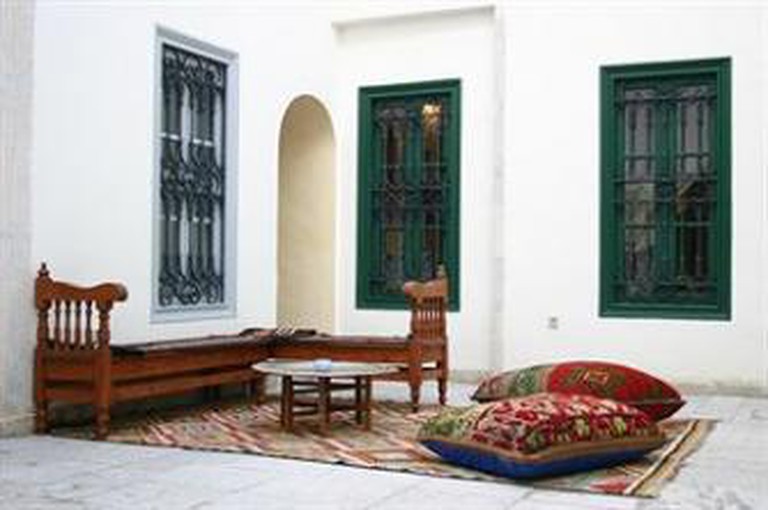 Dar Ben Gacem | © Dar El Medina
View Rooms
Situated in the cultural district of Tunis, Dar Ben Gacem is near to the Souk El Attarine, Zitouna Mosque, and Bab el Bahr. This riad is housed in a traditional building dating from the eighteenth century and features seven uniquely design rooms. The hotel has a central court yard known as a ‘Riyad’ and a roof terrace which overlooks the city. Most of the building’s original features have been restored including all the ancient poles, tiles and ceiling details. Furnishings are either vintage or handcrafted by Tunisian artisans and artists, representing different Tunisian ethnic groups and cultures.
EVERYTHING YOU NEED TO KNOW 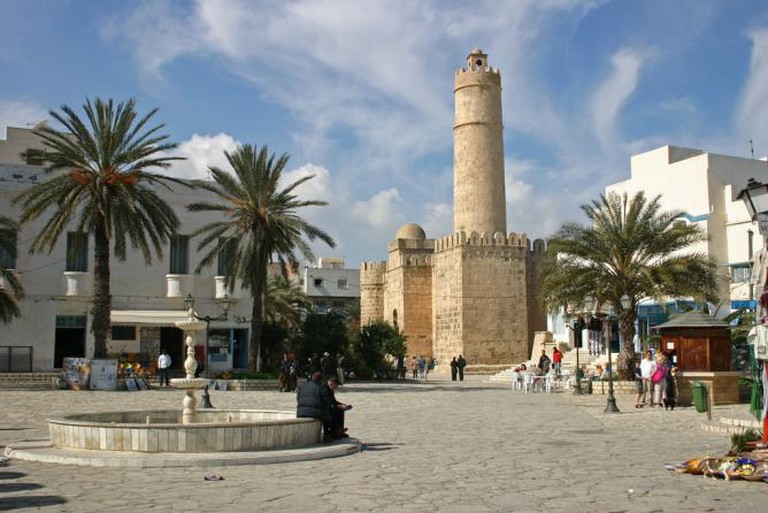 Dar El Medina | Tony Hisgett/Flickr
Located in the heart of Tunis’s medina, Dar El Medina is a hotel in a traditional 19th century building complete with a rooftop terrace offering a panoramic view of Tunis. This twelve room boutique has been run by the same family since it was built in 1825. Featuring whitewashed and tiled walls, with latticed windows, this unique mansion is a vast contrast to the narrow street outside, with inner courtyards providing light, space and shade. Its interior is decorated in sand and neutral colours, with deep rich textiles and modernist paintings in each room.
Open In Google Maps
64 Rue Sidi Ben Arous, La Medina Tunis, Tunis, 1006, Tunisia
+21671563022
Visit Website
Give us feedback

Sousse is one of the older urban centres in Tunisia and has been described as of the country’s liveliest towns, boasting an authentic medina, which has been declared a UNESCO World Heritage Site. This medina stands in the centre, cordoned off from the rest of town by high, medieval fortifications. It is an hour away from El Jem, one of the world’s best-preserved Roman amphitheatres and is also conveniently located on the coast nearby attractive beaches and a clear turquoise sea. 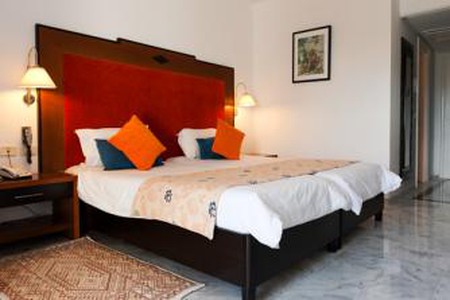 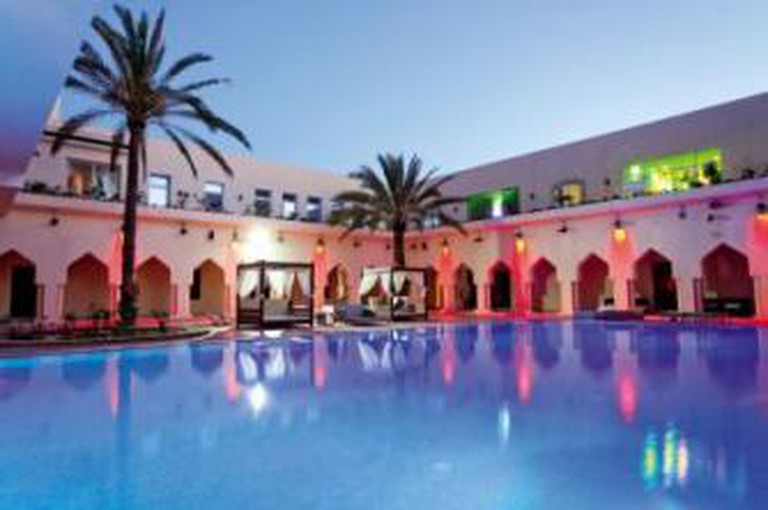 © Couples Sousse
Situated on a private beach, Marhaba Beach is a stylish and popular hotel situated on the outskirts of Sousse, near to the resort of Port El Kantaoui and the historic Ribat of Sousse. Each room comes complete with a balcony where guests can view the surrounding gardens and also houses a grand buffet restaurant featuring a marble floor and arches.
Open In Google Maps
Sousse, Sousse, Tunisia
+21673271588
Visit Website
Give us feedback 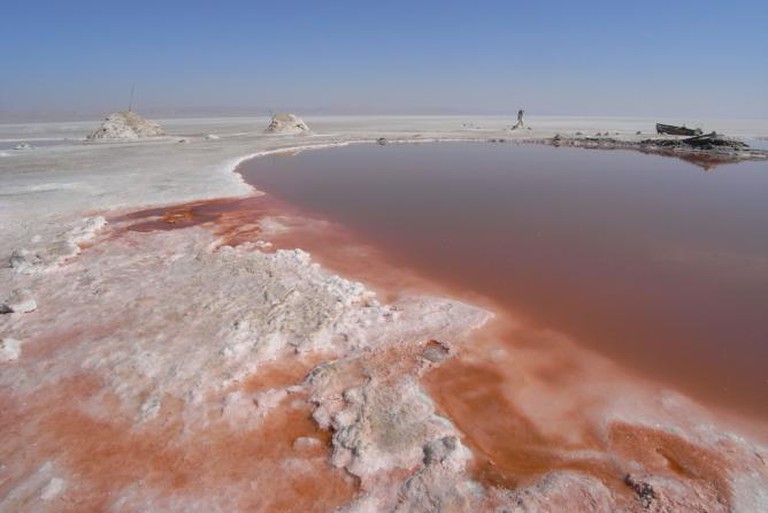 Schéhérazade | veroyama/Flickr
Just a five minute drive from the centre of Sousse and the port town of Port el Kantoui, the newly restored ‘Couples’ Sousse Hotel has its own private sandy beach and beautiful gardens lined with palm trees. It houses two swimming pools, one in the main courtyard and another located in the palm groves, close to the beach. The hotel offers plenty of places to try local dishes including a buffet restaurant and two a la carte restaurants, which serve Indian and Mediterranean cuisine.
Open In Google Maps
Boulevard du 14 Janvier, Sousse, Gouvernorat de Sousse, 4039, Tunisia
+21673241433
Visit Website
Give us feedback

Located in the South West of Tunisia, Tozeur is an oasis known for its beige brick architecture and the 14th-century medina (Ouled El Hwadef) — the old quarter is a small maze of fascinating and intricate brickwork houses, arches and walls. Tozeur is close to the famous salt lake Chott el-Jerid, the largest of Tunisia’s salt lakes which is dry for ten months of the year and has a causeway running over it. 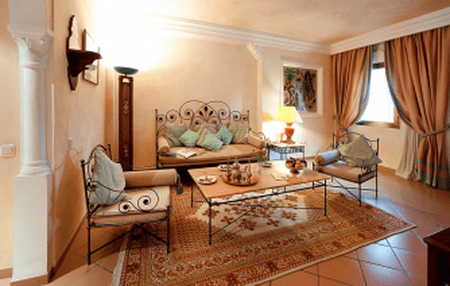 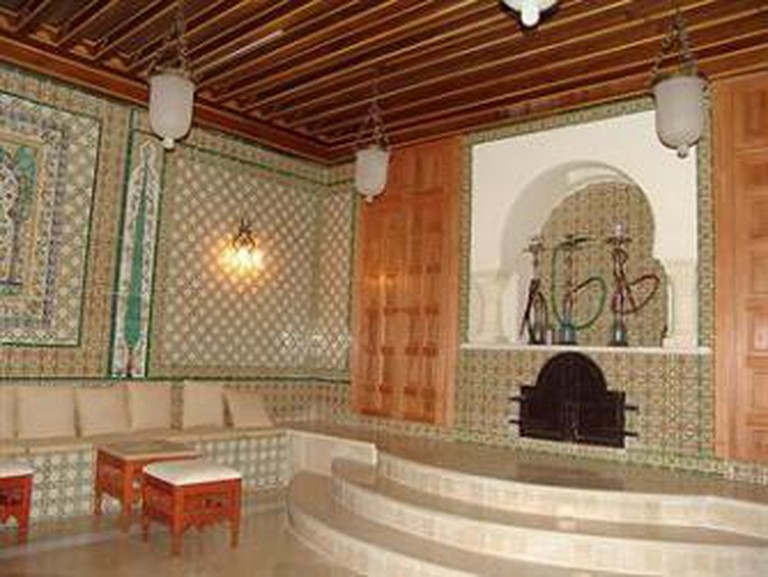 Palm Beach Palace Tozeur | © Hotel Ras El Ain
View Rooms
Palace Tozeur is located in the downtown area of the town close to the Dar Chrait Museum and the Tunisian desert. Surrounded by lush gardens this hotel has been designed in the classic Tunisian style offering 128 rooms and 7 suites overlooking the palm grove. The hotel has a restaurant offering international cuisine and a gourmet menu, two large heated pools, an indoor pool, fitness centre, sauna, a hammam and jacuzzi.
EVERYTHING YOU NEED TO KNOW 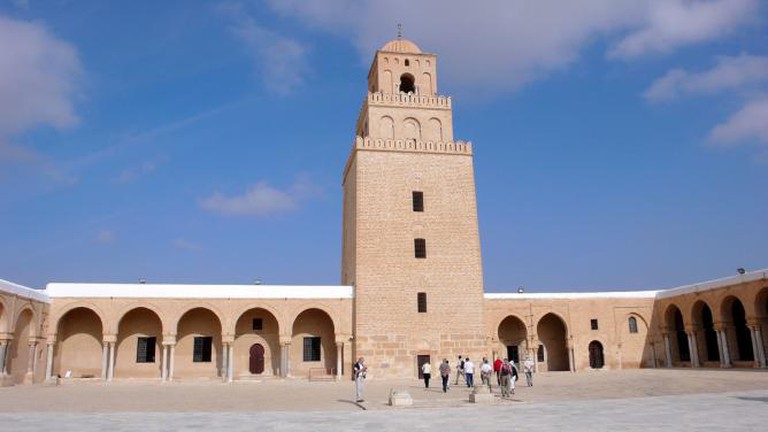 Hôtel Ras El Ain Tozeur | Michel Guilly/Flickr
Conveniently near the airport in Tozeur, the four star Hotel Ras El Ain is close to Chott el-Jerid and is situated in a magnificent garden. Next to the desert, each room is equipped with controlled air conditioning and heating and also houses an indoor and outdoor pool and a spa. Like many of the hotels in the area, the building has been furnished with traditional Tunisian decor and old world style.
Open In Google Maps
Tozeur, Tozeur, 2200, Tunisia
+21676452003
Visit Website
Give us feedback

The many attractions in the Muslim holy city of Kairouan include The Great Mosque, one of the finest Islamic buildings in North Africa, and the Bi’r Barouta Well — the spot where the city was founded which is reputedly linked to the ZamZam Well in Mecca. Kairouan’s grand mosques and cultural history have seen it added to the UNESCO World Heritage List. 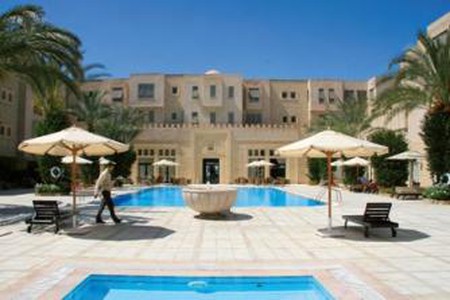 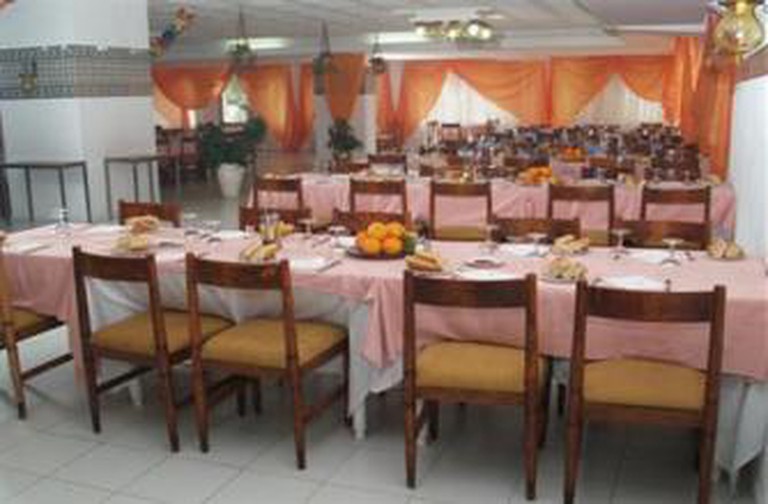 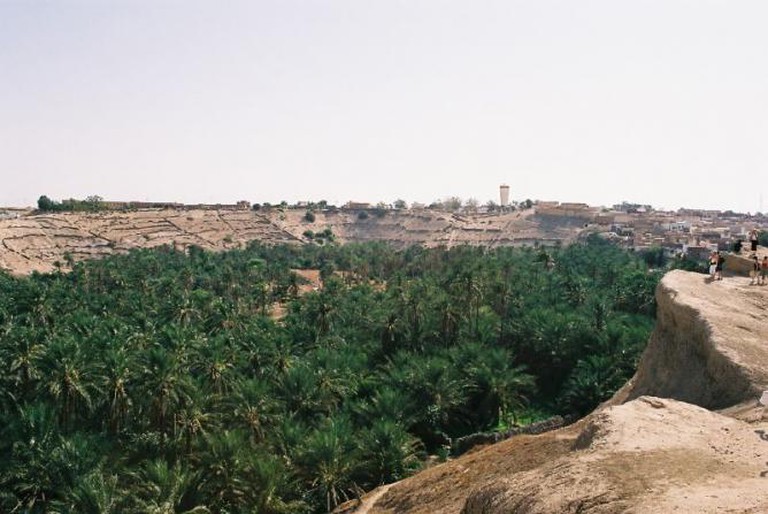 Véronique Debord-Lazaro/Flickr
View Rooms
The Continental hotel is situated in front of the Aghlabid Basins, not far from The Great Mosque and the Mausoleum of Sidi Sahbi. Set in the city centre, the Continental Kairouan is within walking distance of Kairouan’s popular shopping and sightseeing areas. The hotel’s on-site restaurant is an ideal option and the hotel lounge bar is recommended in evenings.
EVERYTHING YOU NEED TO KNOW

With its abandoned hilltop villages and berber towns, Nefta has been a popular filming spot (notably for the original Star Wars films) and has recently become a popular destination for tourists. Located southwest of Tozeur, one of its main sights is The Corbeille (Basket) and the oasis. 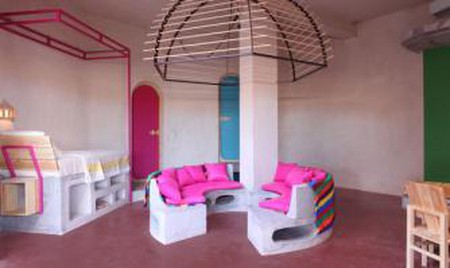 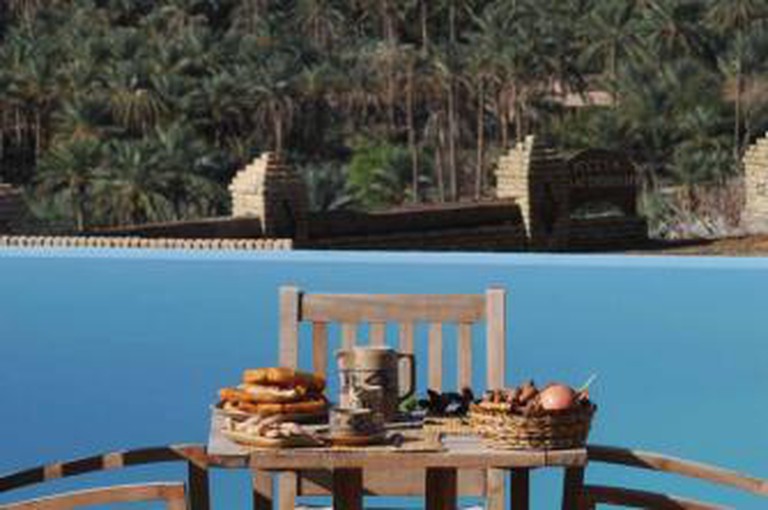 Dar HI | © The Villa Dar Zargouni
Dar Hi, designed by Matali Crasset, is an eco-hotel located on the edge of the Sahara. Housing four types of accommodation, each room is actually a stand-alone, elevated structure, with the bathroom and bedroom situated atop an outdoor seating area. The walls are mostly made of glass, featuring panoramic views. Some open directly onto the sand, and allow guests to rearrange the furniture to suit their needs. In addition, the restaurant uses its own produce grown on site and serves local dishes.
Open In Google Maps
Quartier Ezzaouia, Nefta, Tozeur, 2240, Tunisia
+21676432779
Give us feedback

Guesthouse, Villa
Facebook
Email
Twitter
Pinterest
Copy link
Share
Map View
Dar Zargouni is a unique guest house perched on a sand dune overlooking the oasis. The house is built around two courtyards surrounded by lush gardens and consists of four fully self-contained suites. Free bicycle hire is available to guests and there is also an outdoor pool and garden.
Open In Google Maps
Naftah, Tozeur, 2240, Tunisia
+33618106355
Visit Website
Give us feedback
Give us feedback