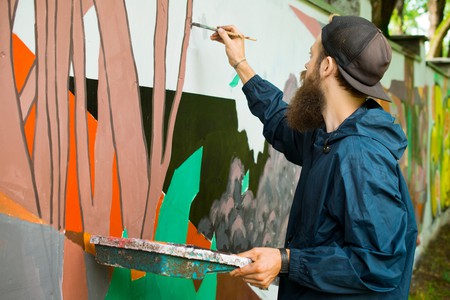 Forget New York, Paris and London. Sparked by the 2010 Revolution, Tunisia is where all things cultural are happening. The city is currently home to a booming street art scene, at the forefront of which is Elektro Jaye, who has become one of the most talked about artists in the country after he claimed that his work was censored at the 2012 Tunis Printemps des Arts (Tunis Spring of Arts). Passionately fighting for free speech, he is living proof that the revolutionary spirit has not vanished.

Elektro Jaye, like most street artists, began by creating his art illegally, practicing on the A6 highway and on suburban train tracks in Paris in the early 1990s. What was only a hobby developed into a serious activity and Jaye progressively got a taste for the medium, sharing his passion with fellow street artists. 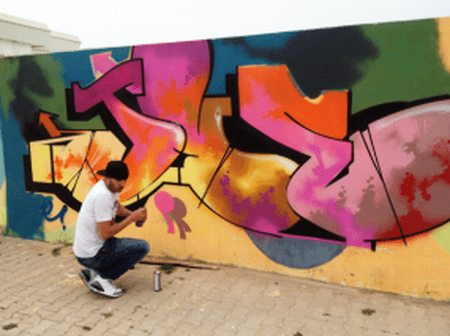 In 2009, the artist moved back to Tunisia for an exhibition at the Gallery Artyshow. Since then he has collaborated with international brands such as Adidas, Benetton and Avirex, producing frescos, paintings, graphics and graffiti for their advertising campaigns. Jaye, who sees himself as a ‘visual composer’, is widely appreciated for his skilful typographic works and delightful calligraphy. The bold, uncluttered colours he uses and smooth characters he designs render a vivid and almost joyful impression of the serious topics he tackles through his art.

A multidisciplinary and talented draughtsman, Jaye quickly mastered spray paint before moving on to canvasses. He first exhibited his works at the Triiad Shop in Paris in 1999, which was followed by a number of exciting shows in France including a paint performance at the Grand Palais – as part of the major ‘Rue’ Exhibition – as well as a group show at the Palais de Tokyo in Paris. 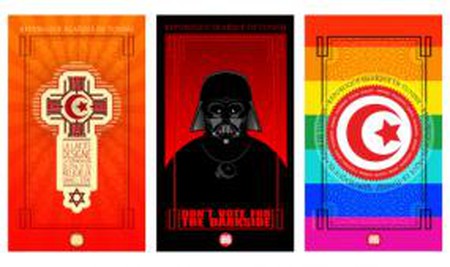 In 2012, Jaye forcefully accused the organisers of the Tunis Spring of Arts of censorship after his provocative series of posters called ‘République Islaïque de Tunisie’ (Islamic / Laic Republic of Tunisia) was removed from the show. The posters included potentially controversial features in Tunisia such as a Star of David, the Christian Cross and a subtle reference to Ennahda, a political party that was banned in the past but obtained a plurality of the parliamentary vote following the Revolution. The artist, interviewed by Tunisia Live, explained that organizers were receiving pressure from the State to withdraw his work because ‘it was too politically engaging and might cause problems’. Although the series will likely be displayed at the Aicha Gorgi Gallery, this incident provides evidence of the lingering tension between the Tunisian government and local artists over the issue of free speech. 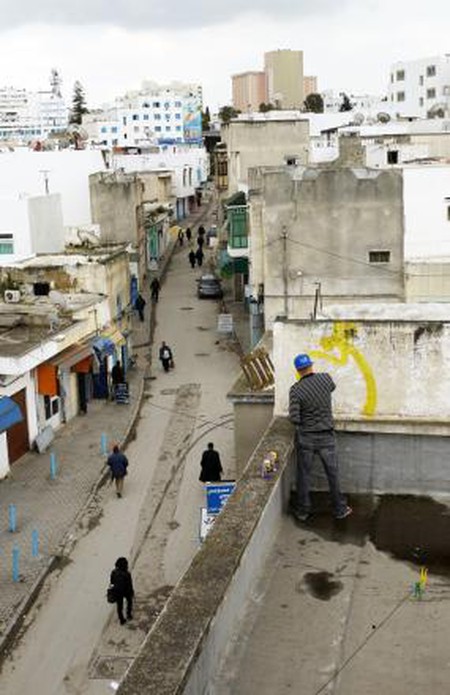 Nevertheless, the Tunisian cultural scene is thriving – as one could witness when admiring the recently painted frescos and murals in the streets of the capital. According to France24, since the fall of former President Ben Ali, local street artists ‘are reclaiming public spaces that were once tightly controlled by police and secret services’. This has caused a major shift in the cultural landscape and it has allowed for alternative forms of artistic expression to bloom, embraced by masters and amateurs alike.
‘Suddenly everyone has something to say’ says Tunisia Live, and new vibrant communities have emerged, such as the ZOO project and the cultural group El Khaldounia. In early 2012, the latter unveiled a monumental 40×7 metre mural created by seven artists. The project required 200 spray paint cans and more than a week of work, boosted by the enthusiastic support of local government entities and neighbours.

Hend Tekaya of Kif Kif Tunisia – an international movement striving to build democratic and intercultural societies – said that this was a first for Tunisia: ‘People are not used to seeing such things. We want to instil a new culture that embraces all types of art, traditional as well as contemporary – such as street art’. But as is the case everywhere, street art is ephemeral – unless commissioned – with authorities quickly erasing all traces of it. But the mere existence of these fleeting works reveals the limits of political repression and symbolises the ceaseless struggle for freedom of expression.
By Mélissa Leclézio