North African cuisine is the product of a whole host of historical, cultural and topographical factors. Ancient trade routes, links with Europe, and a waterless climate have all influenced tastes from Algeria and Morocco in the west to Egypt in the east. Famously, the cuisine of North Africa is packed full of colorful spice mixtures, as cities like Sfax in Tunisia are home to large spice markets. Here are 12 dishes to expand your palate. 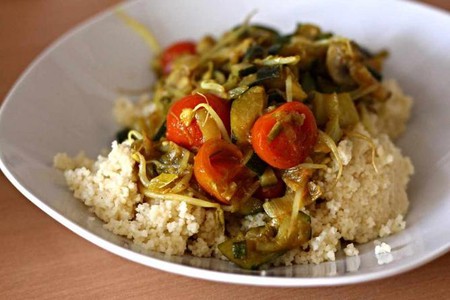 Couscous is the staple food of North Africa, a traditional Berber dish (first mentioned in a 13th century cookbook) of steamed semolina that can be served as an accompaniment with tajine, with plates of vegetables, or eaten by itself. There are lots of regional variations on couscous — you can add harissa sauce; serve it with almonds, sugar and cinnamon for a dessert; or add lamb, chicken and meatballs with a touch of saffron to form couscous royale. 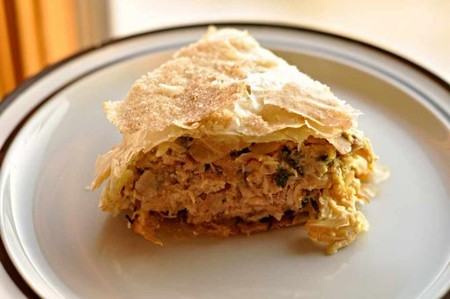 B’stilla, sometimes also known as pastilla, is a Moroccan dish. Its origins are said to be in Fez and date all the way back to the period of the Umayyad Caliphs in the eight century. B’stilla generally consists of a sweet and sour pigeon pie, but can also be made with chicken or quail. Typically served as a starter on big occasions, the b’stilla is filled with the pigeon meat, onions and spices like saffron and coriander, before almonds and beaten eggs are added. It’s all wrapped up in thin warqa pastry that gets very crispy when cooked. 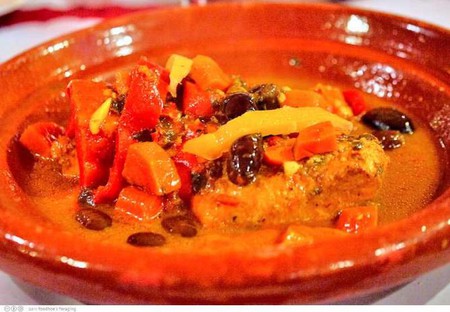 Tajine is perhaps the most famous Berber dish. It takes its name from the earthenware pot in which it is cooked. The tajine has a conical top so that the juices and water aren’t lost during cooking — an important consideration in desert areas where there are so few water sources. The tajine dish is a slow-cooked stew and can be made up of all sorts of ingredients — chicken, lamb, beef, fish or vegetables, stewed with spices and dried fruit and served with couscous and breads. 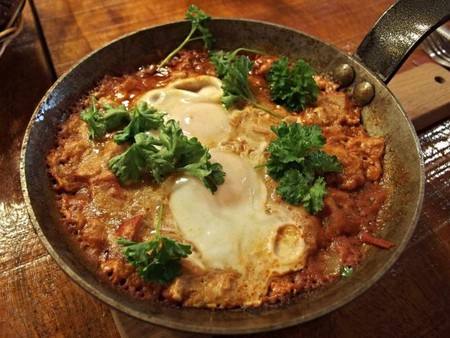 Shakshouka, or chakchouka, is a Tunisian dish that has spread across North Africa and is popular in Israel, as well, having been taken there by Maghrebi Jews. It can be served for breakfast, lunch or as part of the evening meal. It’s one of the most colorful of the dishes on this list and is made up of chopped onions, chili peppers, tomatoes and cumin, cooked in a skillet to form a rich sauce in which a couple of eggs are poached. Add some chopped parsley to the top. 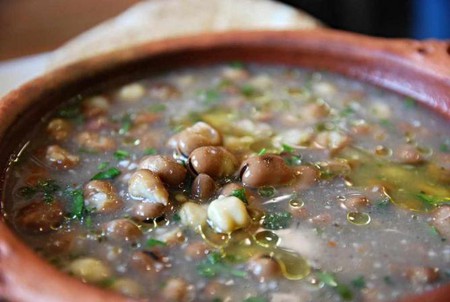 Ful medames is the national dish of Egypt and a common street food in cities like Cairo and Giza. You’ll also find it served in much of North Africa and the Middle East. Ful medames is a dish of fava beans, cooked in a pot and then served with vegetable oil and cumin, garlic, onions, peppers and hard boiled eggs. There’s evidence that as early as the 4th century it was being offered on the streets of Cairo. 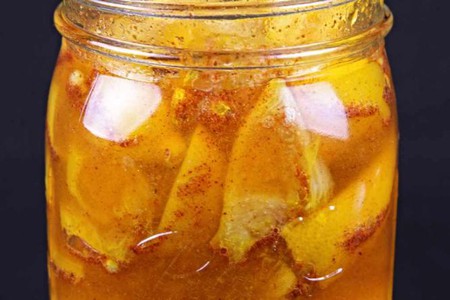 L’hamd marakad, the pickled lemon, is an essential ingredient in Moroccan cooking, served as part of tajine and couscous recipes, as one the main ingredients in salads and plates of vegetables or as a means of flavoring chicken dishes. It should be made using citron beldi, the traditional Moroccan lemons of the doqq or boussera varieties. The lemons are quartered and preserved in water, lemon juice and salt and left to ferment and soften for four to five weeks. After that, the rinds, in particular, are valued for their intense flavor. 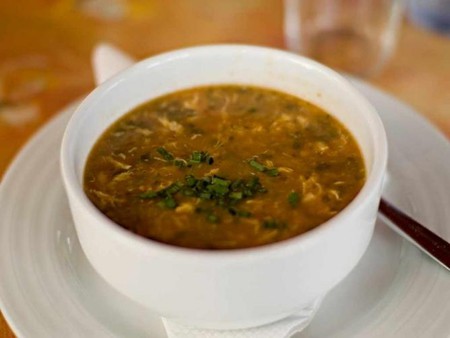 M’hanncha is sometimes known as the ‘Moroccan snake’ or ‘snake cake.’ It’s a dessert made up of a whirl of coiled filo pastry — hence the name. The pastry is rolled out to form a long tube and filled with almond paste and flavored with orange flower water and pistachio; cinnamon is sprinkled onto the cooked filo. You can find an instructional video on making m’hanncha here, and here is a recipe for Moroccan snake cake from Jamie Oliver. 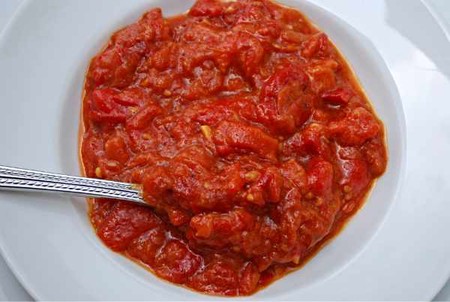 Harira is a soup served in Algeria and Morocco. It is always eaten during the Holy Month of Ramadan, when the fast is broken at sunset. Or it can be eaten throughout the year as a snack or appetizer. There’s no set method or recipe for making harira. It can be made with pieces of lamb, chicken or beef, though it’s normally mixed with lentils, chickpeas and tomatoes. Extra spices like ginger, cinnamon and turmeric are often added, with a dash of lemon juice. Harira is typically served with chebakia, a traditional Moroccan sesame cookie. 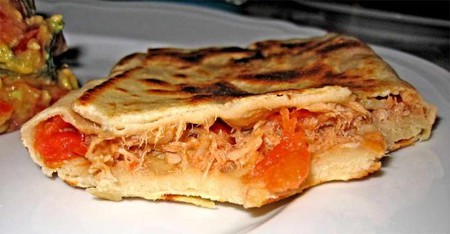 Matbucha is another North African dish that has spread to Israel and Syria. It’s normally served as an appetizer with bread and olives, and it consists of a thick dip made with tomatoes, bell peppers, garlic and chili pepper, cooked together until they form an oily paste ideal for dipping or serving on flatbreads. The importance of tomatoes in matbucha means the dish can date back no further than the early 19th century, as tomatoes were introduced to North Africa and the Middle East at that time by the British Consul in Aleppo, John Barker.

Mhadjeb, or mahjouba, is a staple of Algerian cooking and a common street food in Algiers and Oran. You’ll sometimes find it in recipe books as Algerian crêpes. In essence, mhadjeb is a crêpe filled with a paste of tomatoes and chopped vegetables like carrots, onions and chilis which have been simmered. A street vendor will place a piece of flat dough on the skillet, add the paste, and fold the dough into a square to cook. You can watch a video of this being done in the Casbah in Algiers here. 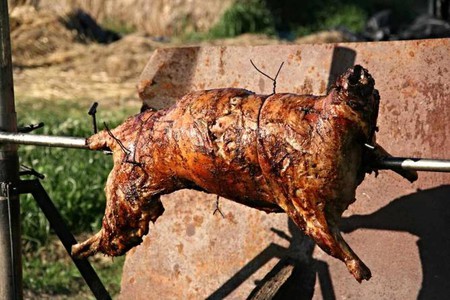 Mechoui is the traditional North African roast — a whole lamb roasted on a spit or in a pit dug into the ground. The meat is served with flatbreads and dips and yogurt. The meat from the head, such as the cheeks and eyes, and the offal is regarded as a delicacy and is handed out to guests in attendance at the meal. You can replicate the mechoui at home with just a shoulder of lamb roasted with spices like cumin, coriander and thyme.

Mrouzia is the dish traditionally served during the Eid al-Adha festival in Morocco. The mrouzia is a very specific type of tajine, made with lamb slaughtered as part of the religious celebration — Eid al-Adha means ‘feast of the sacrifice.’ The lamb is cooked in a tajine along with the spice mixture ras el hanout, some honey, saffron, ginger, almonds and raisins. The combination of saffron and ras el hanout gives mrouzia its unique aroma.