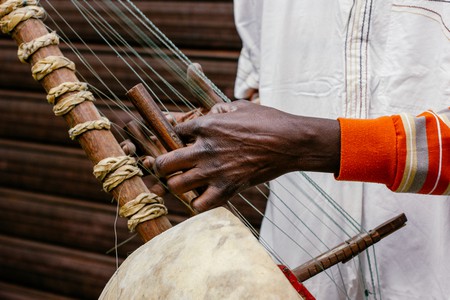 Playing the kora | © AND21 / Shutterstock

Tied to the traditions of the Gambian Mandinka culture, Foday Musa Suso underwent years of training in playing the kora, a West African stringed instrument similar to the Banjo. After collaborating with international jazz musicians and percussionists Suso is now an important part of the world music scene. 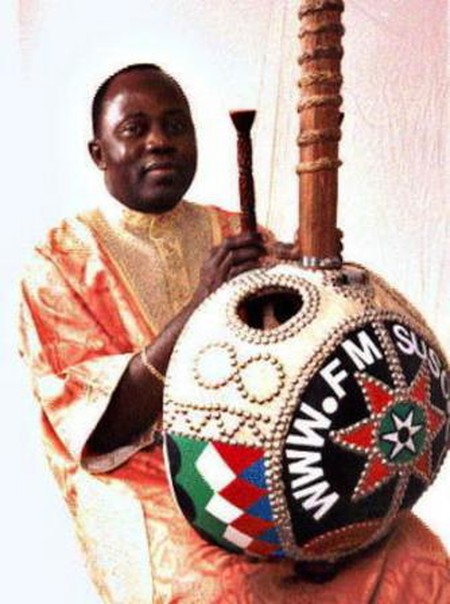 The Mandinka people are the largest ethnic group in The Gambia, Africa’s smallest mainland country located on the West African coast. A society with a rich oral tradition, both in music and spiritual rituals, their most distinctive trait is the use of songs, stories and proverbs as the major form of learning. Within the rural hinterland of The Gambia, social histories are carefully passed down to each generation of Mandinka through griots, the traditional storytellers of West Africa. Another typical cultural feature of the Mandinka is their use of the kora, a 21-string instrument that is built from a calabash. Depending on the musician playing, the kora can sound like a harp (when played more traditionally) or a Blues guitar, which links the music of The Gambia with the Blues and Jazz traditions of the American south.

Watch this video of Foday Suso and his daughter performing:

The origins of the kora can be traced back to Jali Madi Wulen Suso, the great, great grandfather of Foday Musa Suso. It was Foday however, who took some of the first steps in combining Mandinka culture with other musical traditions. Born in 1950 in the Sarre Hamadi village of The Gambia, Foday Suso is a master kora composer and performer as well as a skilled oral historian. From a young age, he lived and studied with his teacher Sikou Suso, the great uncle of Foday Musa Suso. Traditionally, in Mandingo culture, a father does not teach his son. The child is sent to live with a master kora player.

After mastering the kora, Suso traveled to Europe to play the kora. In 1974, Suso taught the kora in the Institute of African Studies Department at the University of Legon in Ghana. A few years later in 1977, Suso travelled to London in which he spent one month playing solo kora concerts before making his way to Chicago. His time in Chicago marked the beginning of his recording career. Here he also formed a group called the ‘Mandingo Griot Society’, with the famous percussionist Adam Rudolph. In the mid 80’s he released the album Watto Sitta. The integration of Suso’s cutting-edge kora playing with a graceful balance of natural synthesised tunes marking it as a pioneering achievement for African music.

As revealed in an article in All Africa, ‘his music is rooted in the meditative folk tradition of his native Gambia, but he also collaborated with similarly omnivorous western musicians like Bill Laswell, Phillip Glass, Herbie Hancock and others to fuse West African music with classical minimalism, free jazz and avant funk’. Hancock and Suso have collaborated extensively, with Hancock featuring as a guest artist on the Watto Sitta album. Suso also collaborated with Hancock on a song for the Los Angeles Olympics and was a guest artist on Herbie’s Sound-System CD, which came out on CBS/Sony Records.