Eating Out In Dar-es-Salaam, Restaurants You Should Try 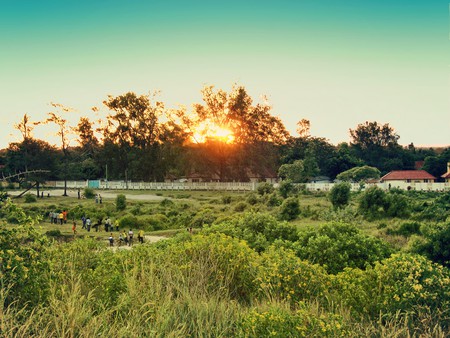 Bustling Dar es Salaam (‘place of peace’ in Arabic) is Tanzania’s commercial and cultural powerhouse. Travelers tend to pass through the city on their way to Kilimanjaro or Zanzibar, but they’re missing out on the sprawling markets, skyscrapers and colonial mansions that embody the vibrant diversity of modern Africa. Dar’s cuisine, long inspired by spices from Zanzibar and Indian migrants, provides a vivid snapshot of Tanzanian society. 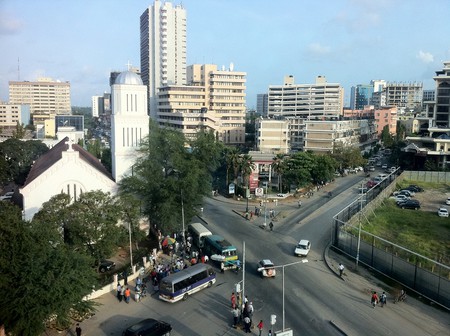 The simply named 305 Karafuu has gained a reputation as one of the finest resaurants in the whole of Dar. Located on a quiet side street in Kinondoni, it has the feel of a family home. The owner’s friendly service is second to none, and the bar is possibly the best stocked in Tanzania. Inside you’ll find low, contemporary yet rustic furniture and an aromatic open kitchen. The walls are bedecked with paintings from local artists, all available for sale. The food is international, but with a definite Tanzanian flavour and lives up to this setting; highlights include king prawn curry and succulent salmon fillets.

Facing the Indian Ocean from one of Dar’s northernmost suburbs, Mediterraneo is perhaps the most beautiful dining spot in the whole city. A glass wall, beneath a rickety wooden roof, looks directly onto the lapping seawater. Outside stand tall chairs fashioned from old canoes, surrounded by palm trees and fairy lights, spilling out onto a secluded stretch of the beach. Stay for a few hours and relax with a range of cocktails before sampling some of the finest Italian food in Africa. Lobster is a key ingredient, whether in an avocado salad or with clams and squid ink pasta, and the helpful proprietors are always on hand for friendly service. 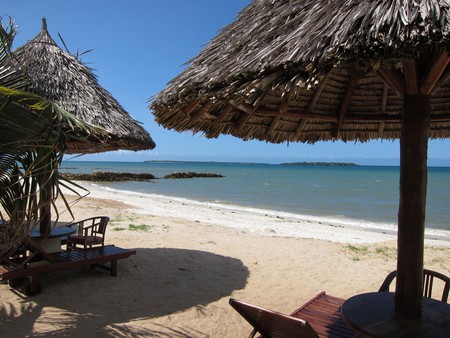 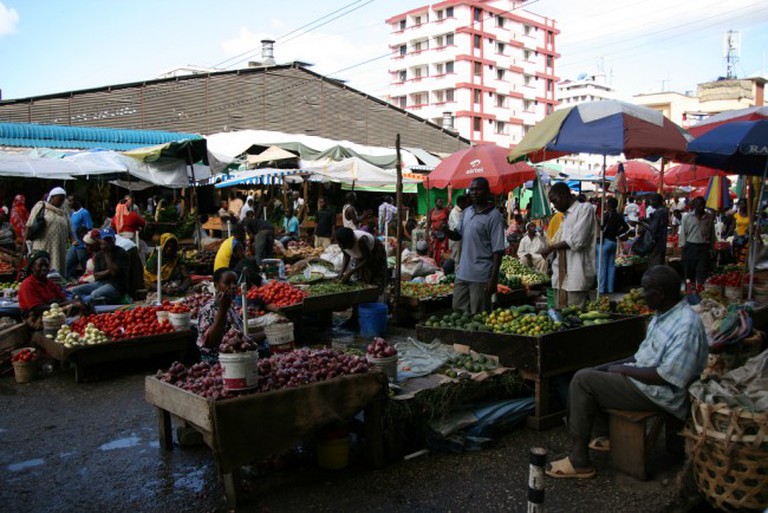 Kariakoo Market, Dar es Salaam | © Marco Zanferrari/Flickr
Delighted by the aroma and flavors of fantastically grilled meat? Then Mamboz Corner BBQ is the place for you. A makeshift patch of tables just off Dar es Salaam’s widest and busiest road, Mamboz is a perfect place to experience Tanzanian street food. The range of cuts and seasonings is astounding including local favourites Firigisi (gizzards) and Maini (livers); and vegetarians are well-catered for with paneer and vegetable sizzling plates. Ask for the extra hot gajjar chicken if you dare, but the milder beef and chicken mishkaki (Zanzibar-style shish kebabs) are just as delicious. Those tempted by the meat, but after a more secluded meal should head north to Mamboz SizGrill in Upanga, where the same dishes can be enjoyed in a calm Asian-themed restaurant.
Open In Google Maps
Morogoro Road, Dar es Salaam, Dar es Salam, 5983, Tanzania
+255784243735
Visit Website
Give us feedback

Restaurant, Tea Room, Indian, European, Asian, $$$
Facebook
Email
Twitter
Pinterest
Copy link
Share
Map View
Nestled in a predominantly Indian area just east of the crowded Kariakoo market district, Chef’s Pride has become a lunchtime institution with locals and travelers alike. Although a selection of European and Asian dishes is available, the real treats here are the Tanzanian options. Sample the ndizi nyama (plantains served in a rich beef broth) with some matembele (sweet potato leaves) and ugali (maize porridge, akin to polenta). If you’re just passing through the area, be sure to stop and sample the selection of maandazis and vitumbra, small bready doughnuts flavoured with cardamon and coconut milk. You can also order tea from K-Tea Room across the road, renowned as one of the best places to try a fruity and spicy chai masala.
Open In Google Maps
Chagga Street, Dar es Salaam, Dar es Salam, Tanzania
+255754657364
Visit Facebook page
Give us feedback

Cafe, Indian, Seafood, European, Mediterranean, $$$
Facebook
Email
Twitter
Pinterest
Copy link
Share
Map View
Visitors in search of an elegant evening with refined international cuisine will find much to relish at the Karambezi Cafe run by the five star Sea Cliff Hotel. Sitting on the edge of a cliff at the northernmost point of the glamorous Msasani peninsula, it offers an unrivaled view of the sea. Sit outside the thatched canopy to feel the gentle sea breeze and share a sumptuous seafood platter, laden with lobster, line-caught fish, crab claws and panoply of other delights. The decadent cakes have become so well-known that the restaurant has recently begun a takeout service. Come on Wednesday and Saturday evenings for live music from an alternating pair of house bands.
Open In Google Maps
Toure Drive, Msasani Peninsula Dar es Salaam, Dar es Salam, Tanzania
+255686653832
Visit Website
Give us feedback

‘Samaki’ is Swahili for fish and an apt name for this local chain. It serves some of the best seafood in town, including fried calamari, grilled octopus, tuna steaks and prawn chilis, along with other meaty favorites. Go to the branch in the modern day Mlimani City Mall, the largest in Tanzania, to eat alongside an excitable crowd of students from the nearby Ardhi and Dar es Salaam universities. It is a curious combination of old and new: with drawers re-purposed as tables and kitsch memorabilia of Tanzanian leaders; meeting in-house DJs and an innovative ordering system using electronic tablets.

Restaurant, Thai
Facebook
Email
Twitter
Pinterest
Copy link
Share
Map View
Although Thailand lies almost eight thousand kilometres across the Indian Ocean, Dar es Salaam does not lack for refined Southeast Asian food. Perched on the ninth floor of the unassuming New Africa Hotel, Sawasdee (‘welcome’ in Thai) is easily the finest Thai restaurant in town. Delicately spiced lamb and nutty Malaysian curries are the order of the day, though for something a little heartier ask for the pork dumplings. The main attraction, though, is the surroundings, there’s no better vantage point from which to gaze across the enormous harbour and into the teeming city. Enjoy are particularly good views of the fairy tale Azania Front Lutheran Church, designed in an incongruous Alpine style by Bavarian missionaries.
Open In Google Maps
Dar es Salaam, Dar es Salam, 9314, Tanzania
+255677023236
Visit Website
Give us feedback 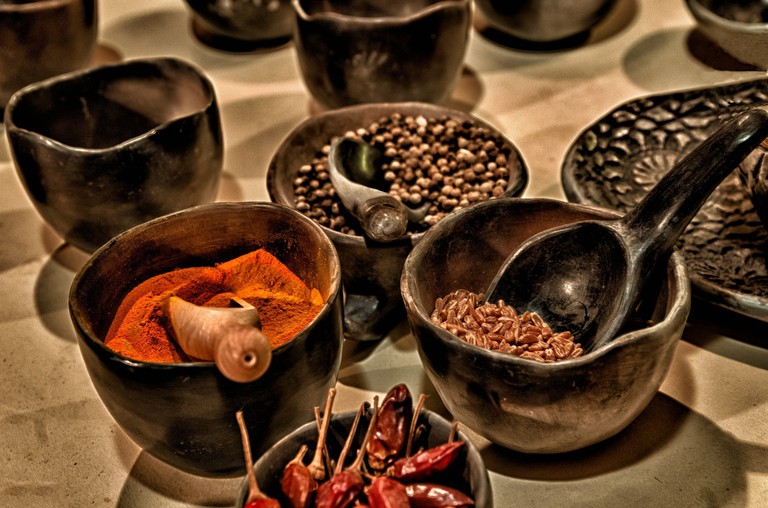 Selection of spices | © babawawa / Pixabay
A terraced garden on the eastern edge of the colonial era Regent’s Estate, Addis in Dar is reputed to serve the most delicious Ethiopian food outside Ethiopia. After washing your hands on entry, gather around a small round table and choose your main dishes. They are served on a huge sourdough pancake, or injera, together with aromatic sauces. Of the numerous vegetable options, the ek alicha wot (chickpeas sautéed in piquant spices) is particularly flavorsome, while meat lovers can feast on kitfo (raw minced beef and spiced butter) and yebeg alicha wot (slow-cooked lamb). Afterwards, enjoy a traditional Ethiopian coffee or some honeyed wine and gaze at the stars through the verdant mango trees.
Open In Google Maps
Ursino Street, Mikocheni Dar es Salaam, Tanzania
+255713266299
Give us feedback

Tanzania has long been influenced by Indian culture, both as an outpost for spice trading routes and as a part of British East Africa after the First World War. Thus, Dar is something of a haven for traditional Indian cuisine, and Chappan Bhog, situated in the colonial area of Kisutu, is one of Dar’s most authentic South Indian eateries. The menu, which is entirely vegetarian, boasts such favourites as thali (vegetables, rice and naan with a range of sauces) and pav bhaji (vegetable curry with buns). It’s also a fine place to enjoy a mid-morning snack, whether idli (lentil cakes), dosa (lentil pancakes) or delectable panipuri (filled, fried breadballs).

Pub, Restaurant, British, European, $$$
Facebook
Email
Twitter
Pinterest
Copy link
Share
Map View
Between 1918 to 1963, while Dar stood as the capital of a British protectorate, the Masaki and Oyster Bay areas to the north of the administrative centre developed into suburbs. Today, they’re still the districts of choice for European residents, lined with embassies and luxury apartment blocks. The George & Dragon is an expat enclave, serving imported beers and simple, hearty fare in a modern incarnation of the traditional English pub. Come for steak and chips and a bottle of Safari or Kilimanjaro beer, and chat to the lively coterie of regulars.
Open In Google Maps
Haile Selasie, Msasani Peninsula Dar es Salaam, Dar es Salam, Tanzania
+255717800001
Visit Website
Give us feedback
Give us feedback