The Must-See Wildlife Reserves Of Swaziland 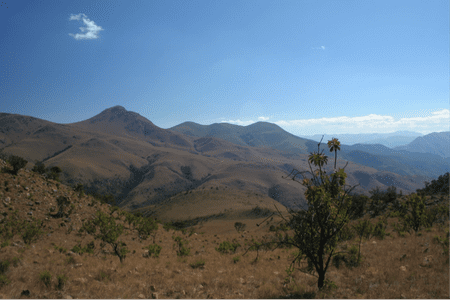 Swaziland has a plethora of wildlife reserves, all of which are within four hours of each other. However, knowing each of the reserves and what they have got to offer can help you choose which ones to visit. Having said this, The Culture Trip wholeheartedly recommends that you visit all of them, because each has its own individual and unique characteristics! Discover the wildlife reserves of Swaziland. 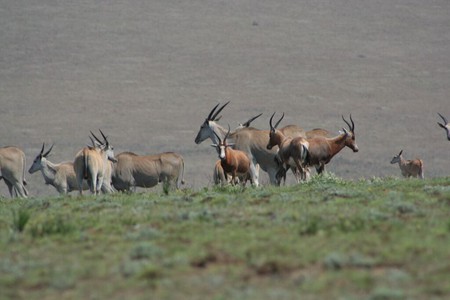 Reason to visit: get active and see wildlife under your own steam | © Jenny Bowen

Malolotja Nature Reserve is a magical place that has a Tolkien-esque feel about it, so you wouldn’t be too surprised if you saw a dragon fly up from behind one of the rolling mountains. This wildlife reserve is located on Swaziland’s western border with South Africa. It is also in the Highveld and unexpectedly has stunning mountains interspersed with gorges and ravines, very uncharacteristic and unexpected in an African country.

It is a hiker’s paradise. At reception you can pick up a map which shows all the contours beautifully, so that you know what you’re in for! There are day walks and also overnight hiking trails during which you could lose yourself in this stunning scenery for up to ten days. The campsites in this wilderness area are very basic, as in a pile of stones to depict where the campsite actually is, so only experienced hikers should walk these overnight trails.

The wildlife here include typical Highveld species such as black wildebeest, grey rhebok, blesbok, and also eland. During the spring time, when the flowers bloom, it is an inspiring place simply to amble around and admire the vistas as well as the flowers and birdlife.

Malolotja is also where Swaziland’s only canopy tour is constructed, and this has been built around the natural vegetation and blends superbly with the scenery. You wouldn’t even know that this 13 element zip wire exists until you are actually clipped into it! 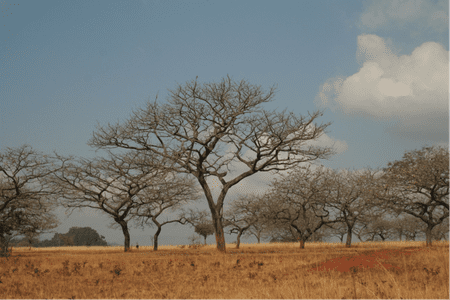 Mlilwane Wildlife Sanctuary was the first protected area to be created in the Kingdom of Swaziland. It is the most popular reserve due to its location in Ezulwini Valley, as it is near the two main cities of Swaziland, Mbabane and Manzini, and therefore attracts many day visitors. Mlilwane is great as a first point of call on a visit to Swaziland, because it gently introduces you to the wildlife of Swaziland and allows you to be active in the process. This is a must after having traveled vast distances on an aeroplane.

Mlilwane positively encourages people to get out into the reserve in a variety of ways. There are numerous hiking trails around the reserve which are very well signposted, and they meander through a number of different ecosystems and around the large dam where hippo are often sighted. There are also mountain bike trails to get even further afield — these trails are graded so that even the experienced mountain biker can face a little bit of a challenge. And if you don’t want to expend too much energy, horse riding is a wonderful way to see the wildlife up close and personal — imagine riding through a ‘dazzle’ of zebra.

Wildlife includes zebra, wildebeest, all kinds of antelope, warthog, hippo, and even crocodiles. The birdlife is also spectacular, and don’t be too surprised if you get up in the morning to find a group of warthog hoglets sleeping outside your front door. You can’t really get better than that for an early morning welcome. 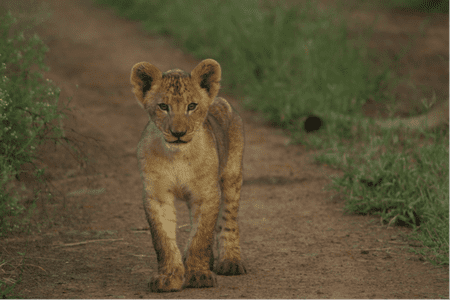 In the vast Bushveld expanse of eastern Swaziland, where the hot, still sun of Africa beats on the dry but life-giving soils, lies Swaziland’s largest protected area, Hlane Royal National Park. Hlane is home to the largest herds of game in the Kingdom, and at night you go to sleep in your private cottages listening to the rumbling roars of lion.

Hlane offers fantastic sightings of white rhino, and Swaziland claims to be the best place to see rhino in the world. There are also elephant, lion, giraffe, hippo, crocodile, hyena, as well as large populations of zebra, wildebeest, and impala.

A guided safari by land rover is highly recommended and gives you the chance to look for big game; you might be lucky and see lion cubs. The game-viewing roads criss-cross the park’s flat terrain, weaving between the 1,000-year-old hardwood vegetation and shallow pans which attract great herds of animals during the dry winter months. The guides are all Swazis, and they impart local knowledge around traditional uses of the flora as well as factoids galore about wildlife. Sit and watch the elephants drinking as you have your sundowner drink.

A visit to Mahlindza Waterhole is also a very good idea. Here there is a bird hide overlooking the water where enormous herds of impala and other ungulates congregate. Spot the resident crocodiles along with Marabou storks and fish eagles. Take a picnic; you could spend the whole day here and not realize it!

Head for the bush and experience the sights and sounds of Hlane against the roar of Hlane’s magnificent lions — the symbol of royalty and the pride of Swaziland. 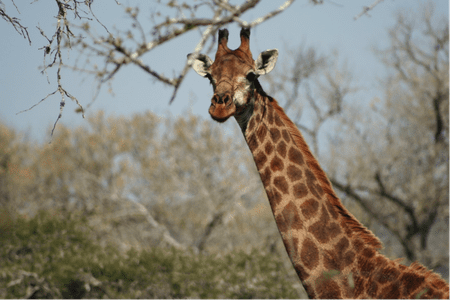 Reason to visit: feeling as you are the only one in the reserve and, of course, seeing giraffe on foot | © Jenny Bowen

Mbuluzi is ideal for those on a self drive, and the roads meander through some of Swaziland’s most pristine Bushveld and a variety of landscapes. The habitat is very diverse, with rocky ridges, knobthorn savannah, and riparian forest.

Among the main attractions are the giraffes, the largest ‘journeys’ found in the kingdom. It is possible to walk within these herds without disturbing them and getting up close to these magnificent animals is certainly something to remember. Other species include zebra, kudu, blue wildebeest, nyala, impala, and warthog. Leopard, hyena, and of course crocodiles make up the major predator population, although you would be very lucky to see leopard and hyena.

There are also many kilometers of well-marked and maintained walking trails, giving a choice of short strolls or all-day hikes, and hikers are free to explore the area at their own time and pace. Bird and game watching along the walking trails can be very rewarding, and because Mbuluzi has such diverse topography, a single morning’s walk sees you move from riparian foliage along the river to boulder-strewn hill tops with lovely views over the conservancy.

The reserve is exceptionally well managed, and you will probably find you are the only people in the reserve — so definitely make the most of this exclusivity and enjoy the spectacular surroundings. 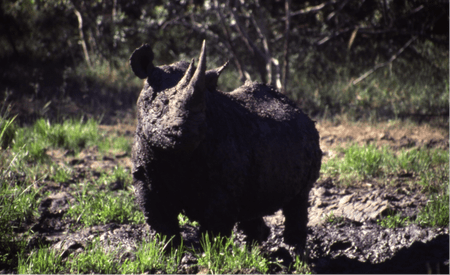 Mkhaya Game Reserve, named after the Acacia nigrescens tree, comprises acacia-dominated thornveld in the south and broadleaf sandveld in the north. Unique, intimate encounters with Mkhaya’s wildlife are exceptional, and all travel within the reserve is by open land rovers or on foot. The reserve is criss-crossed with dry riverbeds, dotted with waterholes, and has a network of intertwined game-viewing roads.

Mkhaya currently supports four of the Big Five, with leopard, buffalo, elephant, and rhino being present on the reserve. You should be able to see rhino up close and personal. A host of other game, such as giraffe, hippo, crocodile, roan and sable antelope, tsessebe, eland, kudu, ostrich, and vervet monkey, are also seen regularly. The birdlife is abundant, and the rare Narina Trogon can sometimes be seen in camp along with the more common species, such as the crested guinea fowl.

Mkhaya was set up as a breeding program for endangered species such as the black rhino, roan and sable — a sighting of the elusive black rhino is normally very high up most visitors’ lists, so keep your eyes peeled on those game drives!

You can visit for the day, but The Culture Trip recommends staying for at least one night, or, better, two nights; you will be so thankful you did! There are game drives in the early morning before breakfast and also in the late afternoon as the sun sets. After breakfast there is often the opportunity to go on a walking safari where you can learn how to track wildlife. The rest of the day is spent at Kirky’s Hide or simply relaxing in the shade of the leadwood trees. Immerse yourself in the bush and away from mass tourism.

Laid out along the banks of a dry river bed is Stone Camp comprising semi-open stone and thatch cottages discretely set in the bush. Sleep in the semi-open while the night sounds lull you to sleep (although this might take some getting used to; that’s why two nights are recommended) and experience a loo with a view!

Jenny has been organizing specialist Safari holidays to Swaziland for 15 years through her business: Sense Africa. She is a qualified ecologist, and enjoys writing about the many once-in-a-lifetime experiences of Africa. Follow my blog, Sense Africa Blog, for more African Safari stories and information, and keep up-to-date on the wonders of Africa by following my Twitter (@senseafrica) and Facebook.