Ibrahim El-Salahi: Painting In Pursuit Of A Cultural Identity

Modernism is a somewhat broad term to describe an artist. For the majority of artists whose work fell into this umbrella category, their work was aligned with one particular strand within the movement: Cubism, Abstract Expressionism, Futurism, Formalism. Yet for Ibrahim El-Salahi, subject of a major retrospective at the Tate Modern (3rd July – 22nd September 2013), descriptions must remain vague. A visionary painter whose formal style is ever-shifting, his practice is defined by the meeting point between Western Modernism and Sudanese culture. 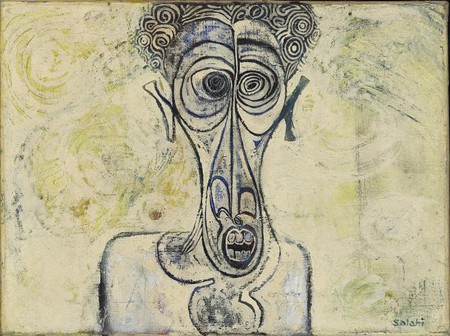 In 1952, when the young Modernist artist Ibrahim El-Salahi moved to London in order to study at the Slade School of Fine Art, it was to completely revolutionize both his art and life. Born in 1930 in Omdurman, Sudan, he majored in painting at Khartoum’s School of Design (then known as the School of Design at Gordon Memorial College) from 1949-52, and was awarded a government scholarship to study in the leading art school in England’s capital. From a country that had precious little exposure to Western aesthetics in contemporary fine art at the time, the move was a complete cultural shock. However El-Salahi, far from being overwhelmed, immersed himself in the art scene of the capital.

Visiting the numerous museums and galleries that London has to offer, El-Salahi saw first-hand many of the leading contemporary artists that were to influence his work. The paintings he produced at this time jumped through a number of styles, from impressionist portraiture to cubist landscape. It is important to view this not as an act of derivation but a loosening-up of his own means of expression; an exploration of the parameters of his technique and visual style. 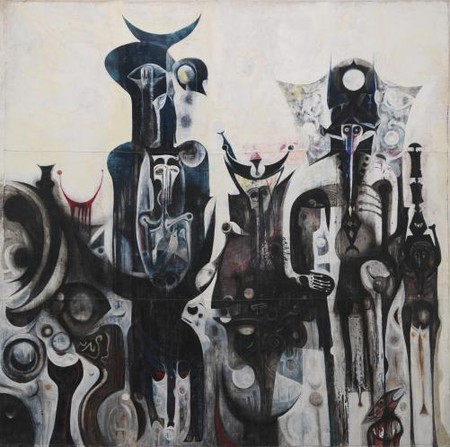 When El-Salahi returned to Khartoum to teach at the Technical Institute in 1957, he became one of the lead artists in a movement known as the ‘Khartoum School.’ Having gained its freedom from British colonial rule only one year previously, Sudan was undergoing a cultural paradigm shift. El-Salahi, along with fellow like-minded creative thinkers, sought to define a new artistic voice and means of expression for the country.

Yet when he held an exhibition of his work from the Slade at the Grand Hotel in Khartoum, his academic style, which sat incongruously in Sudanese cultural language, was uniformly rejected. This prompted the artist to travel around the country, taking a brief hiatus from painting to seek inspiration in the landscape of his native country. Here, the influence of Arabic calligraphy, which he had learned as a young child, became more pronounced in his painting as he began to integrate Islamic signs and scripts into his compositions. His rate of production at this time became relentless. When viewing this period of his career, there is a sense of a constant search to find an artistic identity among the maniform aesthetic influences to which he was exposed. Speaking of this era, the artist himself said:

‘The years 1958-1961 were a period of feverish activity on my part in search of individual and cultural identities […] Those years, as it turned out, were the years of transformation and transformation that I went through as far as my work was concerned.’ 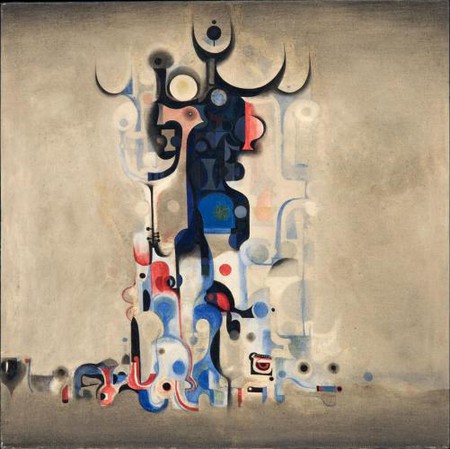 Self-Portrait of Suffering (1961), one of his best-known works from this time, is exemplary of this pursuit. The distended face that becomes almost equine, the dry brush marks and muted palette are all redolent of Picasso, who himself appropriated distorted facial features from West African masks. The inability to trace the visual language to a root source is an articulate allegory for the artists’ sense of creative displacement at this time. Other works, such as Reborn Sound of Childhood Dreams (1961-5), integrated the crescent, a motif of Islamic art that recurred frequently throughout his work.

Along with exploring form and composition, he was also testing the boundaries of the formal properties of paint. Modernism had first proposed the notion of painting not just as an image, but as an object. The canvases El-Salahi produced seemed to swing between two poles — some incredibly heavy with a thick impasto crust of paint (Victory of Truth (1962); Dry Months of the Fast (1962)), others with such thin layers of paint the image barely sits above the canvas, such as Vision of the Tomb (1965), whose crisp detail bespeaks traditional Arabic miniature painting. 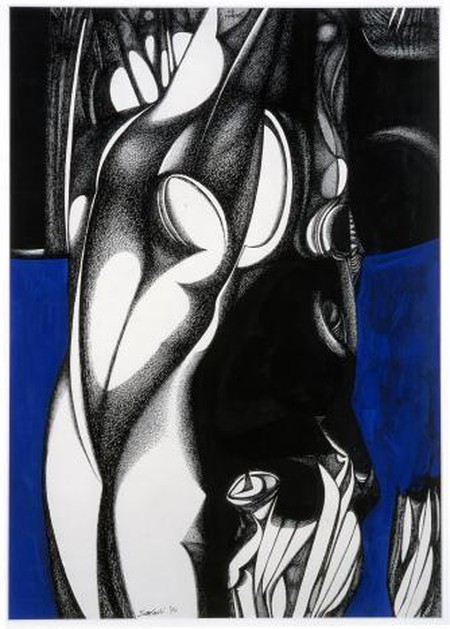 After working for the Sudanese Embassy in Britain for a time in the early 1970s, El-Salahi was offered the position of Deputy Under Secretary of Culture at the Ministry of Information in Sudan. At the time the country was under the military dictatorship of General Gaafar Nimeiry, but the artist still felt duty-bound to accept the post. Yet after a failed military coup, he was arrested in 1975, accused of anti-government activities and incarcerated for just over six months. El-Salahi is a Muslim of a Sufi sect, and during this trying time he discovered that the harrowing conditions he was subjected to could be escaped only through his deep spirituality. This was, according to the artist, a time of great personal change. Upon his release, the artist relocated to Qatar. The quiet pen and ink drawings and prose that make up Prison Notebook show a period of introspection and self-examination, with linear and fluid gestures that skirt tentatively across the page.

Then, again, in the late 1980s, another complete shift came about as El-Salahi began to absorb more of the forms of futurist figures. Still with the pen as his tool, he began to assert himself more powerfully onto the page; figures become machine-like, solid and heavy, composed of lines, tangents, and geometric shapes. The interlocking ellipses of Boccioni can be found in compositions such as The Inevitable (1984-85), and Female Tree (1994), and dense cross-hatched lines cement the image to its support. 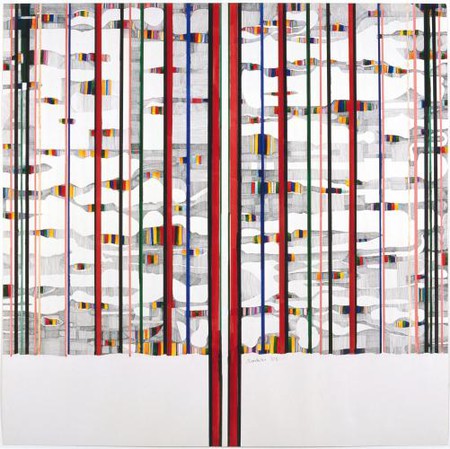 When in 1998 El-Salahi moved to Oxford, this new interest in bold geometric lines was pushed further. Using the English countryside as his subject, the artist began utilizing vertical parallel lines to describe the form of a tree across a series of paintings and drawings. The use of geometric shapes to evoke natural forms perhaps harks back to the Islamic tradition of using geometric pattern to describe the order of the world. Yet through the prism of El-Salahi’s oeuvre, works such as Tree (2008) become Mondrian-esque divisions of canvas; panels of color against white, that are nonetheless representational.

There is throughout his work a vertical aspect to his compositions that suggests painting as meditation or a means of transcendence. Often praying before beginning work, the artist says that he has little control over the final image on the canvas; the creation of his works becomes almost an auto-didactic gesture.
Unlike so many established painters, who in later life fall into a distinct, comfortable style, El-Salahi continues to experiment and test himself and his art. Although he has continued to employ the tropes of Western Modernism throughout, El-Salahi can hardly be seen to be acceding to any supposed superiority of Western culture. With its integration of Western and Sudanese influences, his work collectively can be seen as the relentless exploration of the boundaries of visual language, and the unwavering desire to transcend a fixed cultural identity.