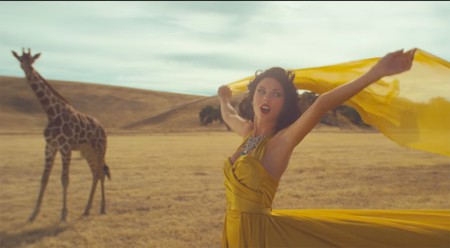 It’s difficult to parachute into a country or a continent and attempt to portray it accurately or reasonably in under four minutes—especially when its overlaid with a cheesy-pop song or lyrics about getting drunk in the club. While most musicians should simply not attempt it, here are a handful of artists—some of who even make remarkable music—who unfortunately didn’t seem to get the memo.

It’s hard not to love Beyoncé and fear her fierce following, but her recent pregnancy announcement left many scratching their heads and wondering if she may be guilty of cultural appropriation. Sure, she took a trip to Nigeria back in 2006, but does that give her a right to incorporate a mix of African symbolism and identities into her dress, videos, and Instagram shoots? While many praise her for attempting to connect to her African roots, there’s evidence to suggest that the iconic singer’s only connection to Nigeria is a princely payout from the then-president Goodluck Jonathan.

We would like to share our love and happiness. We have been blessed two times over. We are incredibly grateful that our family will be growing by two, and we thank you for your well wishes. – The Carters

The track Perfect Strangers is difficult enough to listen to, but throw it over a painful montage of Cape Town and it results in a fairly controversial musical package. This glossy video looks more like a low-budget tourism video found in an airport’s arrivals terminal. Shots of beautiful sunsets, white beaches, scenic hikes, and a tranquil aquarium are spliced with shots of dancing girls adorned with beads and face paint and kids using a paint tin as a drum. This leaves some thinking that Blue’s pre-shoot research consisted of nothing more than a budget one-day tour of the city with a quick visit to a local township to see the “real” Cape Town.

Hero-worshiped by thousands and reviled by a sizable number, Die Antwoord is a South-African band with a backstory few international fans really know. Those that praise this seemingly off-beat duo are usually totally oblivious to the fact that Ninja is little more than a carefully constructed façade. In fact, he’s really just a skinny white guy from Johannesburg. That accent and quick turn of ‘zef’ phrase? Not real. Rather, he meticulously curated his appearance by appropriating and exploiting several South-African identities and cultures into the persona seen in public.

French Montana’s Uganda video serves up a contradiction of emotions. Sure, the Moroccan-American hip-hop artist has made it clear he’s donated thousands of dollars to important African causes. And the stylised official-music video resolves some of the issue. However, does that excuse releasing a video that is little more than an awkward four-minute gaze at an entire country as informed by the opening title of ‘Uganda, Africa’? Montana has overlaid his track about getting drunk on Bacardi and admiring a girl across the room with long takes of “kids dancing barefoot in the mud and on rocks”, because, apparently, they matched the tempo of the song.

Toto’s Africa may be one of the most cheesy-pop anthems of the 1980s, but next time it comes on the radio on a Sunday afternoon, pause to consider the lyrics. Echoing drums, salvation, ancient melodies, Kilimanjaro, and a united rain than appears to fall over the entire 30 million square kilometre (around 11,583,064.8 square mile) continent make this track just a little bit outdated. Not convinced? Give the music video a watch and see how it manages to cram an entire glamourised colonial definition of Africa into one comically low-budget shoot.

It’s hard to imagine a band that makes such inoffensive music could ever create a problematic video, but Coldplay’s slick gloss over of Africa in Paradise falls into several unsurprising traps. Bad elephant costumes aside, the video—which gives at least a nod to a blissful post-Apartheid South Africa—does little to break the mold of Western views of the continent. Instead, it reinforces several problematic tropes and attempts to cast the South Africa as a generic paradise without any real insight or commentary. Accomplishing this may be a tall order for a short-pop video, but then why bother at all without at least trying to infuse something meaningful into it?

Lily Allen’s song Air Balloon starts out painful and ends up outright ridiculous. It’s clearly shot in Cape Town, references Timbuktu (which is a good 8000 kilometres (almost 4971 miles) away), rhymes that with “monkey who ran away from the zoo”, and then ends it all with riding a zebra and romping a cheetah.

According to Taylor Swift, her wildest dream of Africa is a land full of beautiful savannas teeming with wildlife, vintage biplanes, thrilling electrical storms, and not a single black person. In fact, watch a little further into the video for Wildest Dreams and see how she’s stumbled directly into the heart of a romanticised-colonial Africa film set. This is not only an uneducated, but, as NPR points out, bizarrely insensitive.

Solange’s Losing You video is difficult to criticise because it’s beautifully styled and shot. And in many ways, it makes a good attempt at doing away with the tired African tropes. She avoids depicting African people in the all-too-common frame of being poor and victimised, but in doing so, she smashes together a strange mix of African fashion, identities, and global iconography into one unrealistic vision of Africa.

Rick Ross’s strange documentary-style video of Botswana, which he used to promote his new album, may be the most offensive of the lot. He dives into the southern African country with gusto, talks about returning to the motherland and connecting with the people (“We’re here in Botswana”) before posing with the first people he can find before handing out wads of cash. “I just paid for your haircut for the year,” he boasts to an old man in a modest street-side barber. “You’re blessed, you’re a blessed man.” It’s unclear if Ross has any idea about the man’s history let alone how much a single hair cut costs at this small business.