This Campaign Opens up Communities By Shutting Down Cape Town's Streets 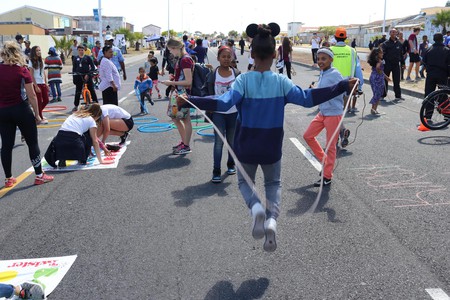 Shutting down a city’s major thoroughfares might seem like a counter-intuitive way to unite its people, but one group of intrepid entrepreneurs and social activists in Cape Town are doing just that – and to rousing support from residents and officials alike.

Shifting focus away from motorised transport

Open Streets Cape Town rose to prominence some time ago when they shut down the inner city’s usually bustling Bree Street. Granted, it was on a Sunday, when much of the vehicular traffic remains parked in garages far outside the Central Business District (CBD). Still, though, the logistics of closing down a major road in a city like Cape Town are daunting enough, as is filling the void with something constructive, inclusive, and engaging. For a city used to being confined to cars, buses, and taxis, the concept of walking down the heart of a busy road was strangely novel, and somewhat unsettling.

Cape Town, like much of South Africa, is inherently biased towards motorised transport. Although in recent years city officials have made an effort to cater to walkers and non-motorised transport, walking or cycling the city streets still comes at a marked risk.

Bicycle lanes often clog with parked cars, or end spontaneously, only to feed unassuming cyclists directly into major roadways. Pedestrian traffic lights make an effort to accommodate those on foot, but as any foreign tourist to the city will tell you, the three seconds of the green man (pedestrian right of way), rapid transition to the flashing red man (if you’re not already walking, wait – but cars must yield for you), and then the stoic, static red man (do not walk), coupled with the total disregard of most motorists for all of the above, make walking in the city confusing, if not outright dangerous. 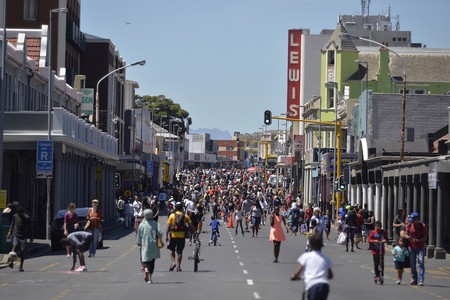 Inspired by a similar campaign in Colombia

Open Streets is a citizen-driven organisation that saw issues like these manifesting in the city, and they decided to do something about it. By shutting down major roads in and around the city to traffic during their Open Streets Days, and opening them up to everything else – from hovering acroyoga practitioners and street artists to free styling MCs and other non-governmental organisations – they’ve managed to shift how Capetonians “use, perceive and experience” their streets.

Surprisingly, despite its apparent anarchic theme, the campaign has also received buy-in from the city of Cape Town, and many local politicians now use the opportunity to walk the streets and engage with residents who might otherwise have been unavailable.

According to Operations Manager Rebecca Campbell, the idea is inspired by a similar campaign in Bogota’s Ciclovia, where they shut down streets on a weekly basis so that people can use them as public space.

“It is part of the character of the city and people have adopted it as a way of life,” says Campell about the Colombian example. “Since they started in the ’70s, it has spread to most Latin American cities and hundreds of cities around the world. We thought something similar could work in Cape Town.”

Although there are several ongoing campaigns that run under the Open Streets banner – including bike to work initiatives, and efforts to influence policy on street use – it’s the Open Streets Days that have garnered much of the attention and spearheaded the campaign.

“It is about raising awareness around issues of mobility in Cape Town, but more broadly to get people to experience their/our city differently,” says Campbell. “It is definitely about shaking up and shocking the system so that individuals can engage with the space in a ‘radical’ way. We think of Open Streets Days as moments to temporarily suspend reality and reimagine streets.” 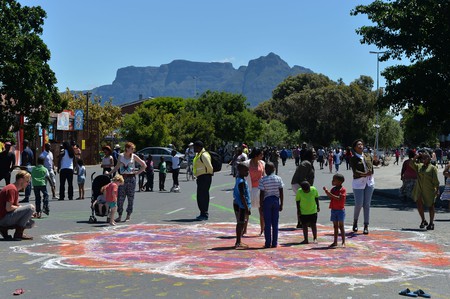 Through this process of suspending reality, Open Streets also hopes to bring people from all walks of life together. “When we started to have the conversation about what Open Streets could accomplish in Cape Town, it was clear that connecting people in a safe and inclusive environment would be at the top of the list of potential benefits,” explains Campbell.

After gaining traction in the CBD, the Open Streets Days now take place on major streets throughout Cape Town – including Observatory, Woodstock, Langa and Mitchells Plain. In doing so, according to Campbell, the events have helped surrounding communities to create a sense of place. “We’ve had small business owners in Langa share anecdotes of networking during Open Streets that led to new business and exposure they wouldn’t normally get. In Mitchells Plain, parents have shared how Open Streets is the only day in the year when their kids can play safely outside in the street,” she states.

Although it’s difficult to measure the specific impact of the campaign, a walk down a closed off street during one of their events is evidence enough that the project has the ability to change the mood and energy of a space previously dominated by impersonal modes of transport. With a focus more on simply being together, rather than harbouring an overtly commercial angle, Open Streets has been able to unite small pockets of the city.

According to Campbell, a united Cape Town is one where all citizens feel shared ownership of the city, particularly its streets: “One of our aims is to help create streets that embody respect for everyone, not just motor vehicles”.

Although truly bringing the city together takes more than a regular street closing event, this is one potent, and uplifting, weapon in Open Streets’ arsenal. And as more citizens start taking to the streets (both during and outside of the events), the campaign keeps finding strength in an unlikely source – the shutdown of the very infrastructure many believe critical to the city’s growth.