The Most Beautiful Buildings in Durban

Built in 1901, Durban City Hall was built to accommodate the seaside town’s growing city centre. Designed by architect Stanley Hudson, it has a distinctly dramatic style reminiscent of Edwardian Neo-baroque. The detailed roof’s design is reminiscent of Renaissance architecture and filled with statues of warriors, lions, and noblewomen. The detailed columns and pillars give it a sense of grandeur as it stands tall over the heart of the city centre next to the iconic Royal Hotel in the CBD. Within the gilded dome are wooden polished floors, marble pillars, ornate iron balustrades and detailed arches. The City Hall has a municipal chamber, an auditorium, the Durban Art Gallery, the Natural Science Museum, and a public library and the venue is often used for festivals and events. 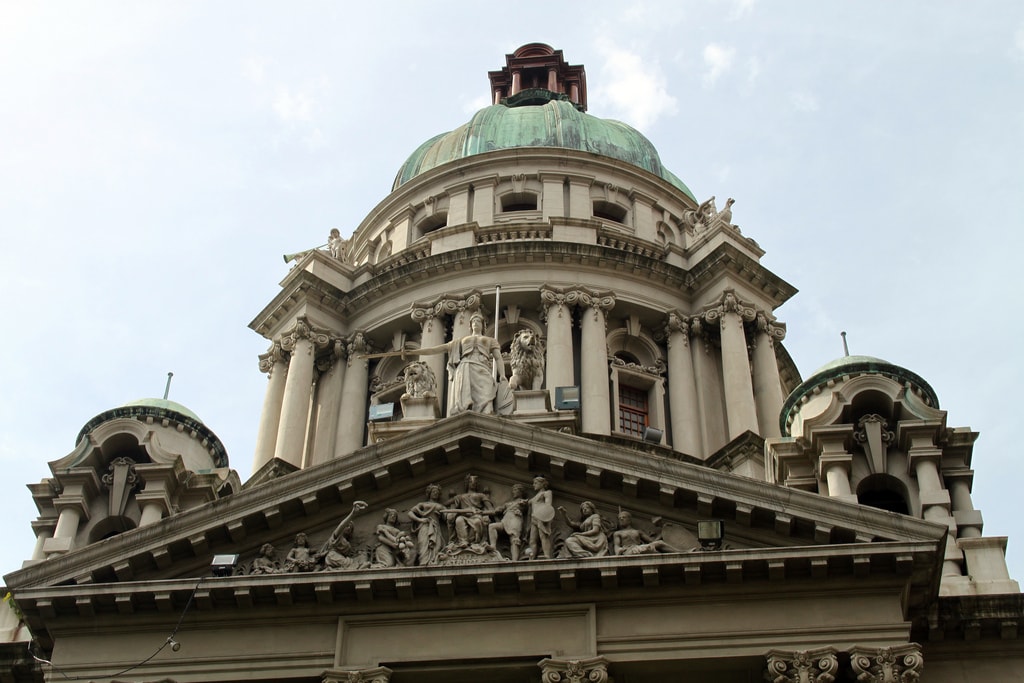 One of the landmarks that stand out in Durban is The Memorial Tower Building at Howard College at the University of KwaZulu-Natal. Howard College was completed in 1931, and the cost of the building was provided from TE Davies, a Durban businessman, whose son Howard, was killed in the Battle of the Somme in World War I. An important feature of this structure is its central tower with its Light of Remembrance. A landmark in the city, it serves as a permanent reminder of those who died in South Africa during the World Wars. The building of the tower cost £235,000 (€266,529.87; $314,843.60). Construction began in 1948 and was completed in 1972; it was opened by the Governor-General of South Africa, the Earl of Clarendon. 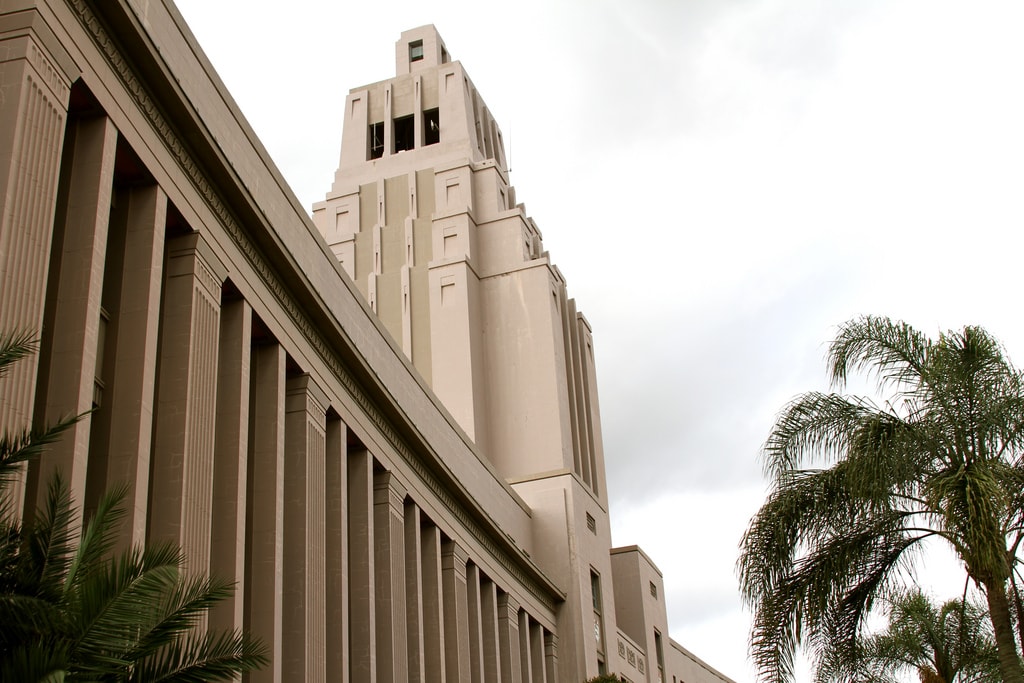 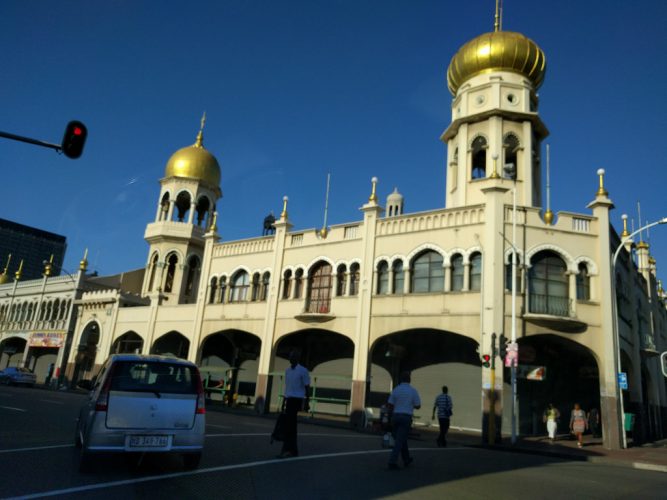 The magnificent Juma Masjid Mosque is Durban;s CBD is one of the largest mosques in the Southern Hemisphere. It dominates Durban’s central Indian district in the CBD and stands out from the busy streets with its gilt-domed minarets tower over the bustling commercial area. Despite the city bustle outside, the marbled worship hall inside is peaceful and quiet and the elegant ablution facilities even have fish swimming in them. On Friday the mosque is filled to capacity for the special afternoon prayers with many visitors having to pray outside the mosque. Off Grey Street is the Madressa Arcade where narrow lanes are filled with an array of interesting shops from tailors and tinkers to marriage specialists.

Originally built for the World Cup in 2010, the Moses Mabhida Stadium is one of the more modern buildings in Durban. Its distinct shape against the blue ocean is striking in the quickly evolving landscape of the city. The arch, 350-metre (1148.3-foot) long by 105-metre (344.5-foot) high, holds the roof of the stadium while the arch rises to 106 metres (347.8 feet) above the soccer pitch. The arch also represents the once divided nation coming together, inspired by the South African Flag with a similar design. A glass elevator carries visitors from the north side of the stadium to a viewing platform at the top of the arch and offers views of the city and ocean. The south side features a 550-step adventure walk for the more adventurous tourists. The stadium also houses a number of cafes, restaurants and even two gyms. It’s also the venue for Durban’s famous I heart Market. 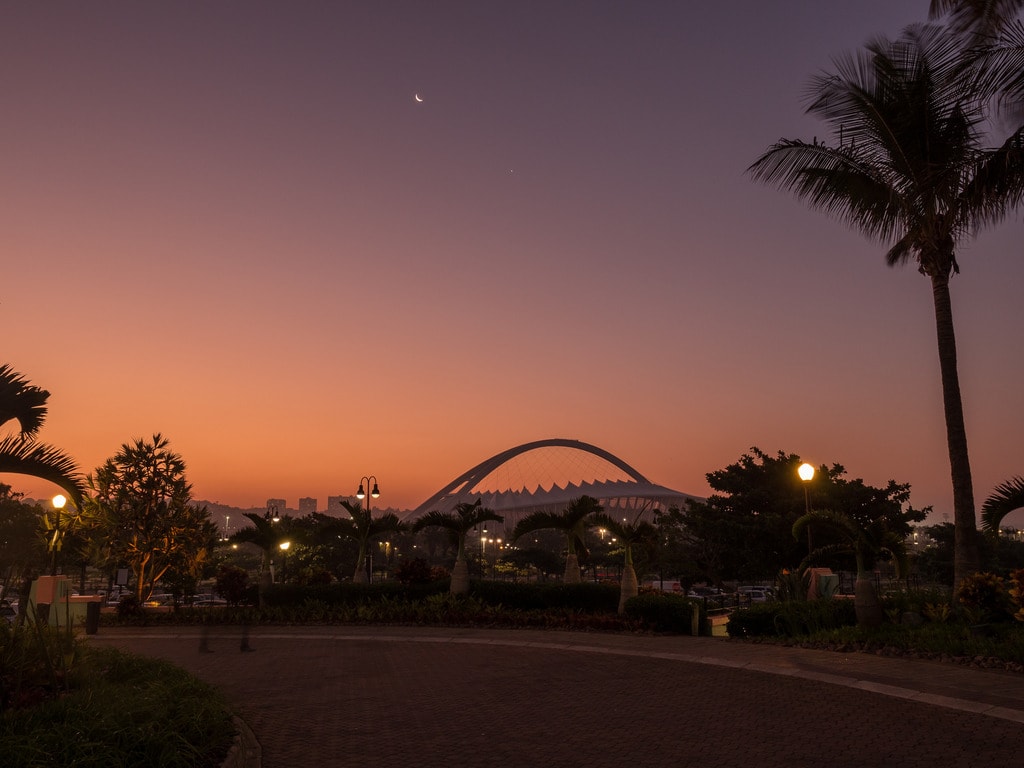 One of the famous art deco buildings in Durban, Victoria Mansions was built in 1935. Painted light blue and white and situated among palm trees, this building looks over the harbour and has a delightful Miami holiday atmosphere. Some of the motifs include kitschy maritime symbols like dolphins and fish and a tiled mural of a Union Castle Mailship entering Durban Harbour with the bluff as a backdrop. It has the traditional chevron bands associated with the deco style of that era. There is also a set of winged lions, two eagles that guard the entrance, and arched picture windows running across the building’s facade. The foyer contains a quaint wooden letterbox and is decorated with strong ziggurat steps. This building is one of many art deco buildings in Durban that took the city’s style by storm from the 1930s. 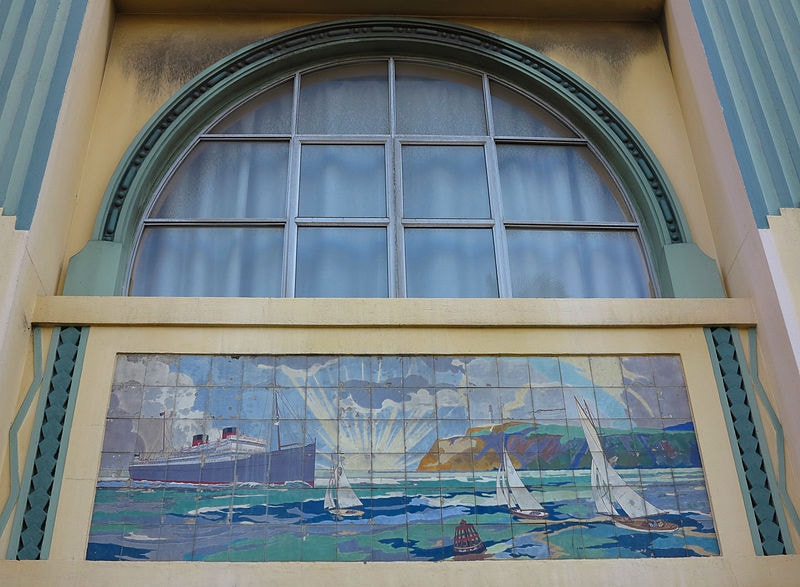 A first for Durban, the abandoned Aliwal Congregational Church was recently restored into a yet unnamed mosque. Built in 1903 close to the city hall, the church was sold in the 1990s and used for business thereafter. During World War I, the hall was used by British armed forces and decades later, the church was used as a furniture store and then a photographer’s studio. In 2016, work began to convert the building into a mosque to support Durban’s growing Muslim population in the CBD. Since the building is a heritage building, the exterior cannot be adjusted—making the exterior a church with a cross and the interior a mosque. The building is now being meticulously restored by heritage architect Lindsay Napier in conjunction with Architects Collaborative. Yusuf Patel, one of the architects working on the project, said that Moroccan artists were brought in to add an authentic touch to the old heritage building. Their fine plaster calligraphy adorns the inside of the holy space alongside with angels from the original church, truly making it one of the most ultimate places of prayer in South Africa.

Interior of The Church Mosque | Courtesy of Architects Collaborative

Designed by South African architect, Street Wilson nearly 100 years ago, this impressive cathedral has a cross designed out of Carrara marble from Italy from Empress Eugenie, wife of Napolean III of France. The cathedral which is in the heart of Durban’s CBD has been visited by dignitaries from around the world. The interior has figures of stone depicting the story of Jesus and the hall is flanked by large stain glass windows depicting the ‘stations of the cross’ donated by Princess Eugenie of France in honour of her son, Prince Imperial. The grounds are well maintained and the back of the church has stonework that is well worth further inspection. Despite the busy streets outside, the interior remains quiet and peaceful thanks to the layered structure of the well-maintained building. 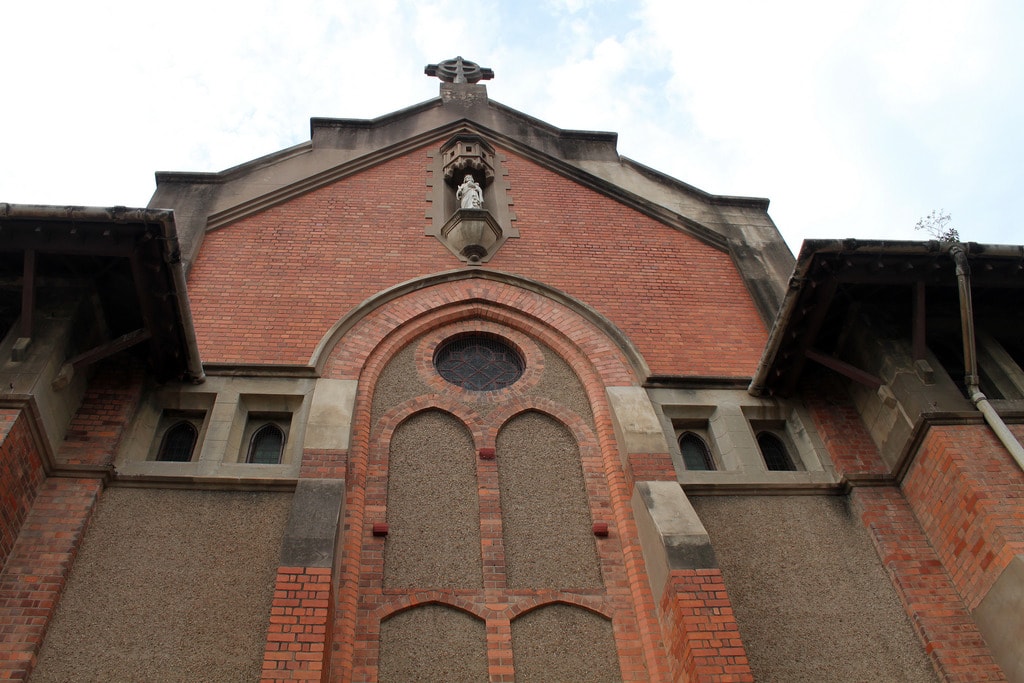