The Fearless Nature of These African Animals Will Surprise You 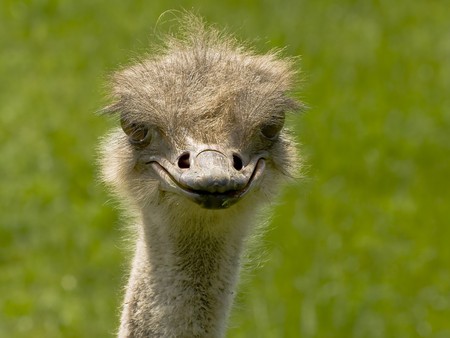 Africa is blessed with an amazing assortment of animals that are mesmerising to observe and stunning to behold. Here are a few that may not rank highly on a “must see” wildlife safari list but are nevertheless spectacular in their own way.

This unassuming and relatively small creature is considered the most fearless animal in the world, and they are notorious for their strength, ferocity, and toughness. They have been known to attack and repel some of the most fearsome animals in Africa, including lions, hyenas, and highly venomous snakes. They can wear out much larger animals in physical confrontations and are virtually tireless in combat, while their loose, thick skin allows the honey badgers to twist and turn and escape from predators. A small flat head, small eyes, and ears that are little more than ridges are other physical adaptions that the honey badger has to protect it during combat. Honey badgers are also renowned for their street smarts and can easily outwit other animals. Never one to decline a challenge, these feisty little animals have been known to rip the heads off poisonous snakes and are impervious to the dangerous spikes of porcupine quills. 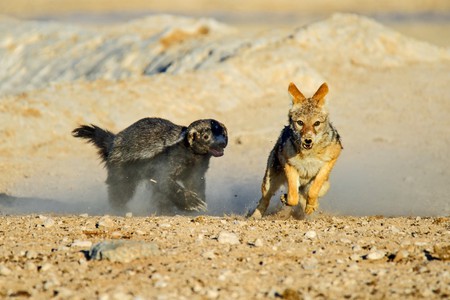 The striped polecat is a distant relative of the weasel with a small head and body, weighing less than two kilograms (4.4 pounds). Despite its miniature size, there is nothing else pint-sized about this animal, whose main mechanism of defense is the legendary foul-smelling substance that it secretes from its anal glands for protection. So powerful is this smell that observation from the Kruger National Park records a polecat standing its ground against three lions which eventually moved away after much lip curling. Female polecats will also fiercely protect their unborn offspring and, once pregnant, will fight off any other male that tries to mount her.

This lazy looking but highly venomous snake is found widely throughout the African continent and attacks with great accuracy and speed. Although puff adders don’t actively attack people, those that do get bitten most often stand on them or unknowingly get to close to a well-hidden snake. Puff adders are one of the most poisonous snakes in Africa and have a strike rate that is faster than that of a camera shutter, so if a puff adder strikes it usually hits its mark. Although they eat mostly rodents, puff adders have been known to devour small duikers (antelope) by first injecting the animal with its deadly venom to incapacitate it. Interestingly, puff adders are one of the few snake species that are ovoviviparous, meaning that the young develop within an egg that hatches inside the female’s body. 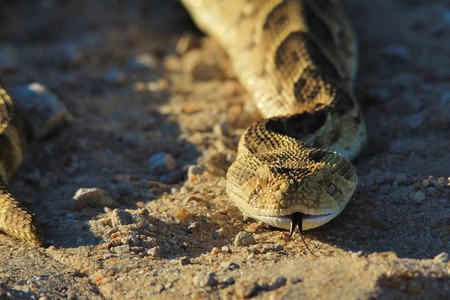 Large and flightless, this awkward looking bird is not to be taken lightly and can run faster than most people drive their cars around the city. Male ostriches are particularly fearless, especially when protecting a nest, and will chase down any danger before kicking it. A long, sharp, claw on each of its toes can rip through flesh like a hot knife cutting through soft butter and do serious damage to anything that gets in its way. While ostriches prefer flight before fight, they have been known to take on lions and other predators such as hyenas. 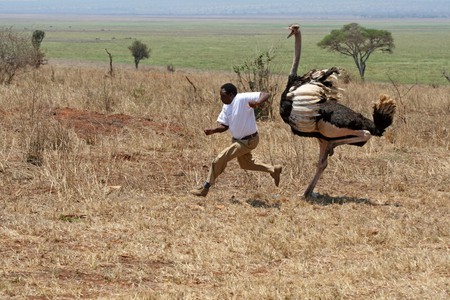 Although its size makes it fearsome looking, the hippo is often one of the most underrated animals in Africa in terms of its fearless and potentially bad-tempered nature. It is the third largest mammal on earth and causes more human deaths in Africa annually than lions, leopards, crocodiles, or any other of the major predators. Hippos are highly territorial and aggressive and most human deaths occur when people unwittingly wonder into a hippo’s personal space, only to get mowed down by its tank-like body that moves at surprisingly fast speeds. Hippos are especially dangerous in water and along river banks, where they guard their ground, but as long as humans keep a respectful distance there should be no trouble. Hippos will also take on crocodiles, lions, and each other, often dueling until death. 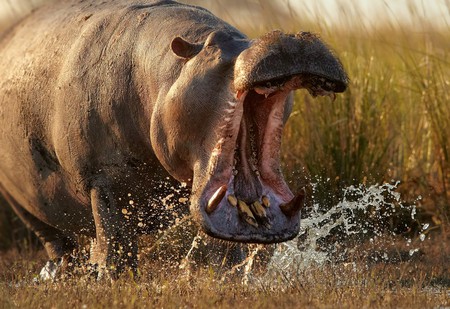 Their human-like behavior makes them fascinating to watch, but don’t be fooled, chimps are not all cute and cuddly and those in the wild should never be treated as pets. Chimps usually show their fearless and aggressive side in wars over territory, while some kill smaller species of primates to eat. Chimps have been observed to mourn death and display many emotions similar to humans, but they also display an inherent violent nature that can be seen from time to time. 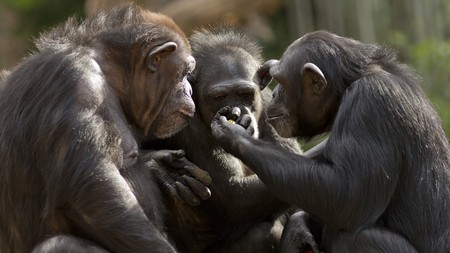 It’s all about attitude when it comes to these aggressive and fearless little birds that frequently display mobbing behavior and often attack much larger birds of prey when their nests or young are threatened. Their amazing aero-acrobatics are frequently seen while on safari drives in Africa and they often employ fake alarm calls to steal food from other birds. The drongo waits for smaller bird species to find food and then makes use of deceptive mimicked alarms, thus scoring themselves a free take-away meal. 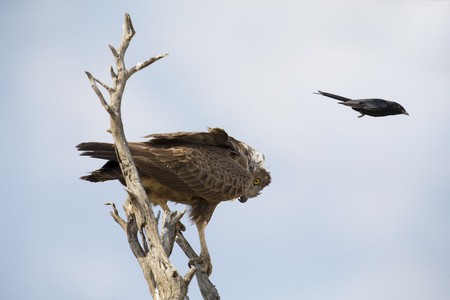 This little guy is far from dangerous but does rate as the strongest living creature on earth, with the male species able to lift objects that are 1,141 times heavier then its own body weight. That’s like your average-sized human lugging 80 tons around with them!