Since their first printed works appeared in the nineteenth century, South African writers have used literature as a means to confront the country’s socio-political issues. Olive Schreiner’s proto-feminist novel The Story of an African Farm appeared in 1883, and Sol Plaatje’s South African epic Mhudi. It’s 20th-century literature was primarily concerned with apartheid, the forced racial segregation between the nation’s Blacks and Whites that ended in 1994, along with the celebration of the Afrikaans language. Cape Town University’s currently runs a storied creative writing program has that has showcased some exciting new and original talent. We take a look at this city’s vibrant literary culture. 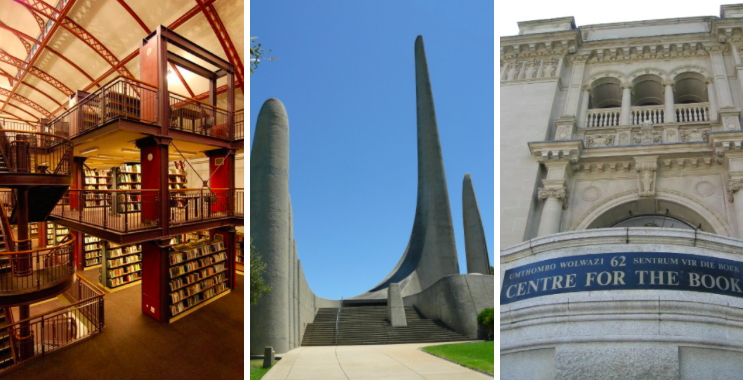 From L to R: Interior of Cape Town Central Library; the Afrikaans language monument; the Center for the Book

Central Library, Cape Town
This library is located within the renovated halls of an old military training facility. It is the only library in Cape Town to stock books in all 11 of SA’s official languages. Another notable feature is its unique music and arts archive in Cape Town (one of only two public arts archives in the country).

Afrikaans Language Monument, Paarl
Located roughly 60 km outside of Cape Town, this spiky monument commemorates the creation of the Afrikaans language. It was erected on the 100th anniversary of the founding of Genootskap van Regte Afrikaners (the Society of Real Afrikaners) who helped make the Afrikaans an official language of South Africa.

National English Literature Museum, Grahamstown
Tucked away in this small university town on the Eastern Cape, the museum is dedicated to the preservation of English literature by Southern African authors. Founded in 1972, the museum has since grown into a national resource of all types of written material funded by the South African government.

KwaZulu-Natal Literary Tour, Durban
The literary tourism project was established in 2002 and provides trained literary guides and detailed maps to avid bookish travelers who wish to embark on trails that touch upon places written in the works of dozens of writers including Alan Paton, Fatima Meer and Lewis Nkosi. 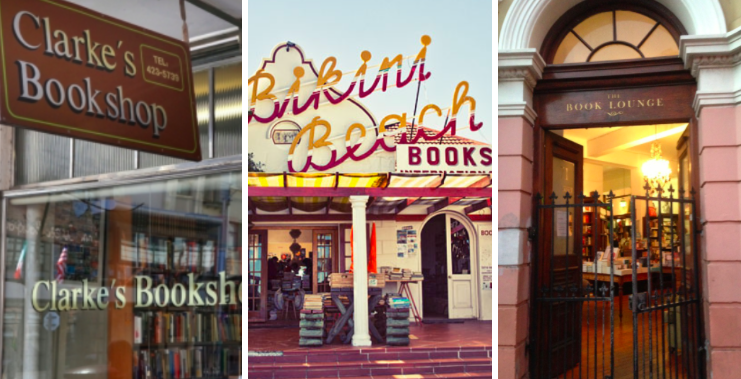 Clarke’s Bookshop
A Long Street institution since 1956, Clarke’s offers a wide selection of southern African fiction and nonfiction, and maintains an “Out of Print” section which can be viewed on their online catalog updated twice a year.

The Book Lounge
A revamped ye-olde world Victorian building brimming with various tomes of the latest releases as well as many classics. The Book Lounge is the hive of Cape Town literary activity, hosting book launches, author lectures, and a Saturday morning story time in the shop’s legendary children’s corner.

Kalk Bay Books
Often described as the bookstore with the most beautiful view in the world, this picturesque stone pub-turned-bookstore, a favorite for book clubs, is mere meters away from the sea and within walking distance of the Kalk Bay train station.

Select Books
A member of the Southern African Book Dealers’ Association, this charming bookstore specializes in buying and selling books relating to South African culture and history, and houses a number of rare books handpicked by its owner.

Bikini Beach Bookstore
For many years, this bookstore has maintained a “knock-only” policy and kept neither a website or even a telephone number. Its loyal patrons have since given the shop its own Facebook fan page. 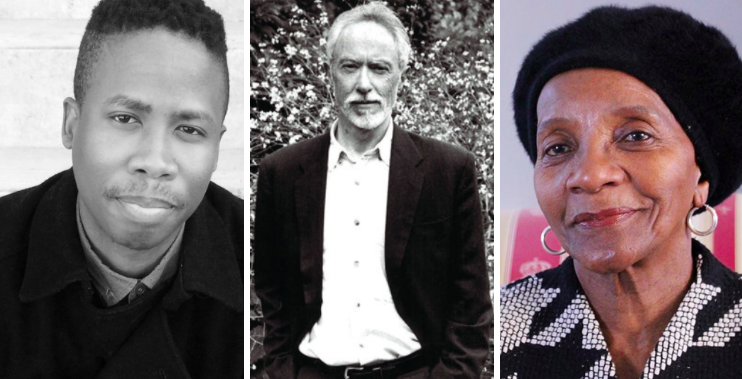 John Maxwell “J.M.” Coetzee
Coetzee’s novels are often set in the Western Cape and told by narrators who are caught between opposing forces (civil and race wars, “civilized” and savage societies). Coetzee was twice awarded the Man Booker prize (for the Life and Times of Michael K and for Disgrace respectively). The Swedish Academy awarded Coetzee the Nobel prize in 2003, citing the writer as someone “who in innumerable guises portrays the surprising involvement of the outside.”

Sindiwe Magona
Magona has had long and glorious careers in both social activism and literature. She cofounded the Women’s Peace Movement in 1976. Her most famous novel Mother to Mother is a fictional account of the controversial death of Fulbright Scholar Amy Biehl. Among her awards are the Order of iKhamanga, a Presidential Award and the highest such award in South Africa, and the Imbokodo Award, which she shared with Nadine Gordimer.

Breyten Breytenbach
A longtime literary activist, Breytenbach was famously thrown in prison for charges as innocuous as writing dissident poetry and as farcical as plotting to blow up Robben Island with a Russian submarine. He published his most famous work, the memoir The True Confessions of an Albino Terrorist, soon after his release. Breytenbach has since published several novels, essays, and volumes of poetry and has been cited as the poet laureate of the Afrikaans language.

Masande Ntshanga
A former Fulbright scholar, and one of the bright young talents emerging from South Africa, Ntshanga won the inaugural PEN International New Voices Award in 2013. His debut novel, The Reactive, about a trio of AIDS-postive drug dealers, was called by the Cape Town alternative newspaper City Press as “the hottest literary debut of 2014” and was later published in both the US and the UK. Ntshanga’s work has since appeared VICE, n + 1, and Rolling Stone.

Ingrid Jonker
Called the South African Sylvia Plath, the life of poet Ingrid Jonker has fascinated people to present day. Like Plath, her poetry is laced with searing emotion and difficult subject matter. And like the American poet, Jonker committed suicide while in her early 30s. Nelson Mandela read her poem “Die Kind” about a child killed from apartheid forces, during his first assembly as South Africa’s democratically elected president. Though she was the subject of an award-winning film biopic “Black Butterflies,” only a single translation of her poems exists in English. 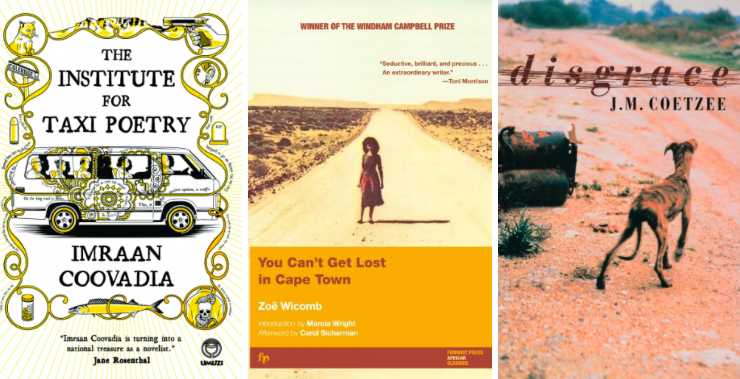 A Walk in the Night & Other Stories (1962)
A classic of Cape Town literature by SA activist and politician Alex Le Guma, A Walk in the Night was summarized by writer Liam Kruger as “a foundational Cape Town story, the way Great Expectations (and everything else of Dickens’) is a foundational London story.” On display here is 1960s Cape Town then in the early years of apartheid, where Blacks were forcibly removed from neighborhoods and many leaders were sent off to Robben Island.

You Can’t Get Lost in Cape Town (1987)
Zoë Wicomb’s You Can’t Get Lost in Cape Town is a powerful collection of stories concerned with race and femininity set in apartheid-era Cape Town. As “coloured” people, Wicomb’s characters occupy the space Black and Whites, the behaviors of the latter they are encouraged to mimic while hiding their mixed heritage. The collection turned many heads, including writer Siddartha Muhkerjee, who wrote in a rave review of the book for the New York Times.

Long Walk to Freedom (1995)
In Nelson Mandela’s riveting autobiography, the iconic South African president profiles his early life, his education and years as a political activist, and his notorious 27 years in prison (where he wrote part of his autobiography in secret). A compelling read, it paints a vivid picture of the extraordinary life of hardship and fortitude lead by Mandela on his quest for freedom in South Africa.

Disgrace (1999)
Set in post-apartheid South Africa, the story follows a middle-aged white professor at a Cape Town university who is dismissed for having a relationship with a student. This sets off a chain of events that will shatter his pride and leave him utterly dishonored. In his book, Coetzee deals with various themes such as exploitation, personal shame, the subjugation of women and a country in transition. Disgrace was awarded the Booker Prize the year it was published.

The Institute for Taxi Poetry (2012)
An ideal read for any Cape Town traveler, this novel by Imraan Coovadia imagines a Cape Town-based fleet of Taxi Cabs that promote poetry. Its protagonist, an instructor at the eponymous Institute of Taxi Poetry is set into a tailspin after his mentor is killed by a mysterious assailant. A witty and meditative novel love letter to Cape Town by a writer hailed by novelist Gary Shteyngart as “one of the best novelists to come out of South Africa in a long time.”

* This guide pulls from preexisting listicles curated by Lee-Shay Collison and Seanagh Palmer-Pilgrim for Culture Trip. As these previous lists may include items not shown here, links to these pieces have been hyperlinked in section titles.