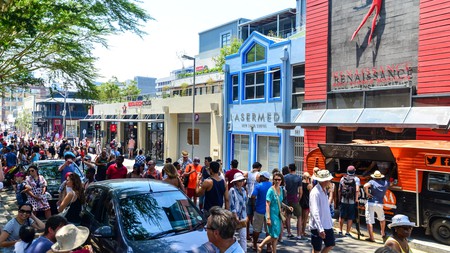 Bree Street, with its restaurants and shops, is among the coolest streets to explore in Cape Town | © jbdodane / Alamy Stock Photo

Cape Town is fortunate to have several famous streets that criss-cross major metropolitan areas. Some, such as Long Street and Kloof Street, are famous more for their nightlife than anything else. And others, including Bree Street, have earned reputations for their high-end restaurant offerings.

Although most Capetonians will have their favourite streets in the city, what many people forget is that it’s a spatially and socially divided city, says Rebecca Campbell, acting managing director at Open Streets.

“There are few public spaces that are welcoming for everyone, and many streets were designed to segregate people and control movement during apartheid,” says Rebecca. “Over the past few years, we’ve seen the amazing potential for the role that streets can play in Cape Town becoming a more integrated, safe, connected and vibrant city.”

“People can come together on these days to enjoy a car-free public space and experience streets as platforms for sustainable mobility, creative expression, local cultures and values, activism, economic opportunities and healthy recreation,” says Rebecca. For her, streets are platforms for art, culture, socialising and trading, and are often where the best experiences of the city can be found.

The following are some of Rebecca’s favourite streets in the city – and what she likes most about each. 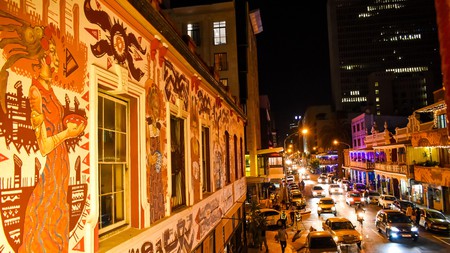 Long Street is one of the oldest – and in many ways most notorious – streets in Cape Town. It’s a mixed bag of restaurants, bars, nightclubs, bookshops, clothing stores and backpacker lodges.

In the late 1800s, it was the longest street in Cape Town, and today, it stretches from Cape Town Harbour to the suburb of Gardens.

It’s easily the loudest and most energetic thoroughfare in the city, especially after dark, and is best known for its buzzing nightlife and bohemian vibe. But bar and club-hopping aren’t the only highlights here – architects will delight in the Victorian buildings that have been restored over the years. Among these, you’ll find the oldest slave church in South Africa and the Palm Tree Mosque, dating back to 1820.

For Rebecca, there’s a special atmosphere on Long Street that’s not readily found elsewhere in Cape Town. She particularly likes the street’s energy – driven by the music – and the diversity of people who frequent it.

“Not everyone notices the trees on Bree Street, which contribute to the character of the street and make it more enjoyable because of the shade they provide,” says Rebecca.

Bree Street is another busy thoroughfare that runs parallel to Long Street, but it has a distinctly calmer feel than its neighbouring party street. That’s not because it’s devoid of nightlife, but likely because it attracts a slightly more mature crowd.

There’s a variety of popular restaurants on Bree Street that pull in crowds from early in the evening, and as the night wears, the bars and occasional clubs whirr to life. It’s also one of the few streets in Cape Town with designated cycle lanes, at least for half of its length, which makes it popular for non-motorised transport users. 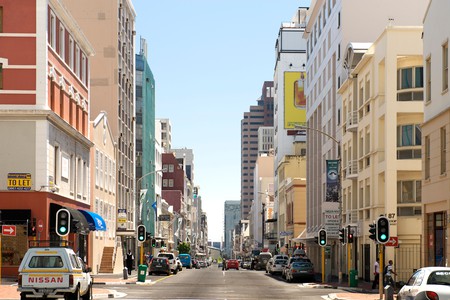 Loop Street is an often-forgotten one-way street tucked between Long and Bree. For many years, nothing really happened on Loop Street, but in recent years, developers have noticed its potential as a thriving thoroughfare in the heart of the CBD.

These days it offers a crop of nightclubs, cafés and restaurants. There are also several art galleries along Loop Street, spurred on by the popular monthly First Thursdays events.

Offerings on Loop Street are less established and predictable than those on its parallel neighbours, but its rapid and constant reinvention makes it a worthwhile one to explore on bicycle or foot.

“The light along Loop Street is also really beautiful at sunrise and sunset,” says Rebecca. “The tall buildings make it a great corridor to cycle down – just not during peak hour traffic!”

Kloof Street begins where Long Street ends, and it runs uphill towards the affluent suburb of Higgovale in the suburban Cape Town City Bowl.

On either side of the street, you’ll find fashion boutiques, art galleries, interior design shops and restaurants. It’s a great place to engage in some people-watching, too – Capetonians and tourists can be found going about their daily business, dining at sidewalk cafés, shopping for groceries or hitting the gym.

Most of the formal activity is centred around a shopping centre located on lower Kloof Street, but there are several quirky surprises hiding on its entire length, all the way to its upper reaches, marked by the truly bohemian Bombay Bicycle Club.

“I love the way Kloof Street is accessible by bus,” says Rebecca. “You can easily hop off and walk straight into a bar or restaurant.”

While Adderley Street is a lot less glamorous than its counterparts, it is the main street of Cape Town and worth a visit. It’s also Rebecca’s favourite street in the city.

“It’s my favourite street because of its scale and the amount of movement – commuters, shoppers, tons of people on foot,” she says. “It has so much potential to become a vibrant, people-friendly space.”

Adderley Street is where the city’s famous flower sellers are stationed. They set up daily along an alleyway adjacent to the Golden Acre Shopping Centre, where people buy roses, proteas, and other local flora.

Adderley Street is home to the oldest church in South Africa, the 300-year-old Dutch Reformed Groote Kerk, and around the corner on Wale Street is the beautiful St George’s Cathedral.

At the top of Adderley, where it transitions into Wale Street, is the Dutch East India Company’s Slave Lodge, now a fascinating museum, and the entrance to the Company’s Garden.

Locally known as “Obs”, Observatory is a bohemian suburb located a mere 10-minute drive from the Cape Town CBD.

This is where artists, hippies, backpackers, students and foodies come to hang out. But there’s also a growing middle class in the suburb living in beautiful Victorian homes, which adds another element to the street’s thriving nightlife and restaurant scene.

The road is also home to some of Cape Town’s best graffiti murals, and several colourful local characters, which is one of the reasons why Rebecca marks it as one of her favourites.

“You get to know the faces and characters,” she says. “There’s a sense of community that you don’t find in many parts of Cape Town.”

Rebecca says Kruskal Avenue, in the suburb of Bellville, is another worthy inclusion on any list of Cape Town’s coolest streets.

Although not on the radar of many Capetonians who don’t live in the immediate vicinity, it’s been earmarked by the city as one for future upgrading and development.

Bellville is a demographically affluent neighbourhood, and this diversity flows down on to the street that runs through its heart. If plans come to fruition, it’ll likely see several changes, including improved motorised and non-motorised transport options, in the future.

King Langalibalele Drive is one of the busiest streets in the suburb of Langa, and it serves as a popular addition to Opens Streets’ calendar of annual events.

The street was renamed in 2014 to honour amaHlubi chief Langalibalele, who was imprisoned on Robben Island in 1873. Today, it’s a fascinating stretch of road that’s been home to some of the country’s most famous musicians and sports stars, and this vibrancy, warmth and energy spills out on to the often bustling kerbsides.

“It has a rich history and is a guaranteed place to make new friends – and bump into old ones – if you’re on foot,” says Rebecca.

This is an updated version of a story created by Lee-Shay Collison.