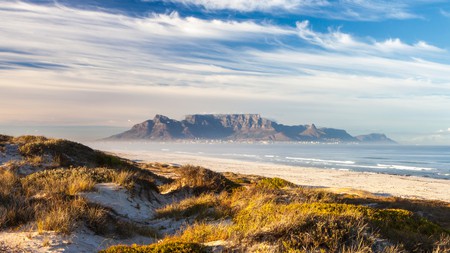 A postcard from Cape Town or drawing up any Google search of the city will no doubt feature a wide-angle shot of its best asset, Table Mountain. And all these photos are likely taken looking back from the Cape West Coast.

The Cape West Coast has the perfect vantage point of Table Mountain, which sits across the vast Table Bay and rises above Cape Town. But there’s more to the region than good views – it’s an adrenaline junkie’s paradise, home to some top-rated restaurants, beautifully unspoilt beaches and perfect locations for sundowners.

Exactly where the West Coast starts is a minor point of contention. To reach the official municipal border of the West Coast district means driving about an hour north of Cape Town. Technically, though, those iconic views, isolated beaches, a few quirky local hang-outs and stunning sunsets are only a short distance from the city.

The main reason most day visitors take a short drive up the Cape West Coast is to capture a shot of Table Mountain at its most impressive. It’s an easy trip to make – either by car, MyCiti bus or Uber – and there’s a remarkable vantage point of the flat-topped mountain within about 20 minutes of the city centre.

The popular Sunset Beach, Big Bay and Blouberg are all great places for an all-South African sundowner, and given that from most vantage points the sun actually sets over the ocean here while still offering views of the mountain, it’s a top pick for late afternoons. 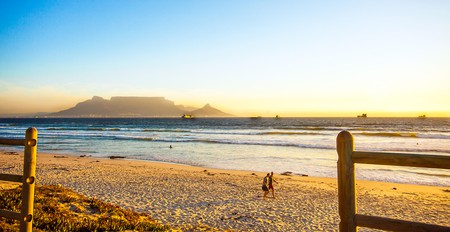 For a more formal environment from which to enjoy the views, there are several restaurants, bars and even a shopping mall dotted along the coastline.

Approximately 30 minutes outside the city is the first popular restaurant in the area – Blowfish, which offers sushi and other seafood with the famous backdrop of Table Bay and Table Mountain. Just a few hundred metres up the road is a stretch with some low-key takeaway joints and chains – popular among residents and great for an easy burger or pizza. Their location on the other side of the often-busy Otto du Plessis Drive does, however, detract from the atmosphere.

For laid-back dining options, Doodles and Cafe Blouberg are good options. And the pair of seafood-focussed restaurants On the Rocks and Ons Huisie deliver fresh seafood, set to great views.

Blue Peter, a local Cape Town institution, is famous for its sprawling green lawns, and its panoramic sea and mountain views are worth paying for, particularly for a cold beer in the late afternoon.

There are several dining options along the coastline, from formal restaurants to casual cafés | © Grobler du Preez / Alamy Stock Photo

Though it may seem like a contradiction to travel to one of the most beautiful vantage points of Table Mountain in order to disappear into the confines of a shopping centre, they do exist in these parts.

Eden on the Bay is a busy destination frequented mostly by residents. But there are several chain restaurants and takeaway spots here that offer decent views of the nearby beach.

A far more authentic shopping experience exists several kilometres south at Milnerton Flea Market; however, it’s only open on the weekends. This traditional flea market features a variety of traders set up in simple stalls selling anything from old cameras, books and furniture to cheap plastic items and assorted antiques. It’s a hit-or-miss affair that’s worth visiting as much for the atmosphere and people-watching as it is for the odd possibility of uncovering a diamond in the rough.

The northern suburbs are also a hub for adventurers. The surf along the West Coast is often hailed as one of the best breaks – though timing it correctly and knowing where to head is key. Big Bay, in particular, is hailed as a good wave. When it’s just right, it’s not too big for beginners, and it’s still fun enough for seasoned surfers.

But if there’s one sport that shines particularly brightly up the West Coast, from Blouberg to Langebaan, it’s kitesurfing. The wind in this part of the world blows consistently enough to make it a celebrated kiteboarding destination. It’s possible to catch the wind throughout the year, but it’s best in summer, which is also when the famous Red Bull King of the Air takes place.

Several stores in the coastal suburbs of Table View and Blouberg allow kite-less visitors to rent or buy all the necessary equipment. 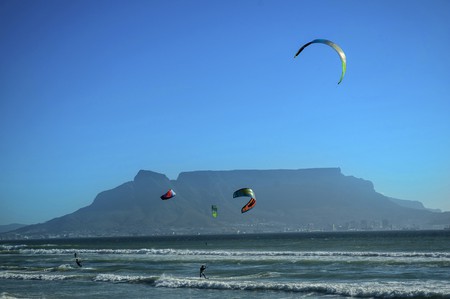 The Cape West Coast stretches north, much farther than the suburban towns around Blouberg and Table View, however. There are several destinations worth visiting that are a slightly longer drive out of town – be it as a long day trip or with an overnight stop.

Melkbosstrand is a great compromise in this regard; it’s far enough out of town to feel new and intriguing yet still easily reached in under one hour. It has a beautiful beach, distant views of Table Mountain, as well as several restaurants and coffee shops. Die Strandloper Seafood Boma is an open-air fish braai restaurant on the beach worthy of a special mention.

The next stop along R27 is Yzerfontein. It’s a tranquil, largely unspoilt coastal village perfect for escaping the crowds and enjoying the authentic, low-key West Coast lifestyle. It’s just over one hour from the city.

The town of Langebaan is known around the world for its famous water sports. It’s particularly famous for its persistent winds that attract kitesurfers from around the world, but it’s also a popular destination for kayaking, stand-up paddleboarding, windsurfing and yachting. The town is built around water sports, so it’s possible to rent everything you’ll need here. It’s approximately 90 minutes from Cape Town.

Paternoster is perhaps the most famous, true West Coast town close to Cape Town. It’s a quaint village made up primarily of whitewashed fishing cottages and some more modern interpretations. There are dozens of accommodation options in Paternoster, from budget to extravagant, and in recent years, it has developed a reputation as one of the foodie capitals of the country. It boasts several of the Cape’s highest-rated restaurants, such as 2019’s restaurant of the year, Wolfgat. At just over 90 minutes out of town, it’s the perfect overnight break from the hustle of Cape Town. 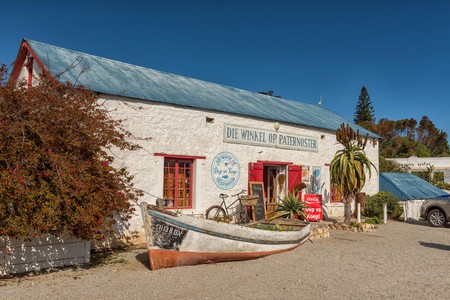