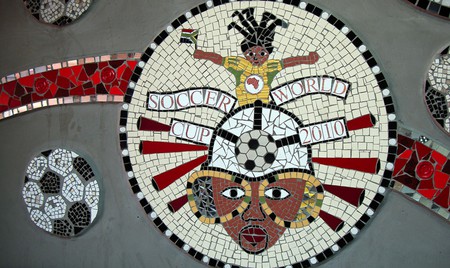 Public art in Cape Town has been a fairly contentious issue for some time. Though some installations have been ill-considered, insensitive and problematic, others serve a greater purpose of provoking thought and lighting up public spaces.

‘Arch for Arch’ celebrates the work of a local hero 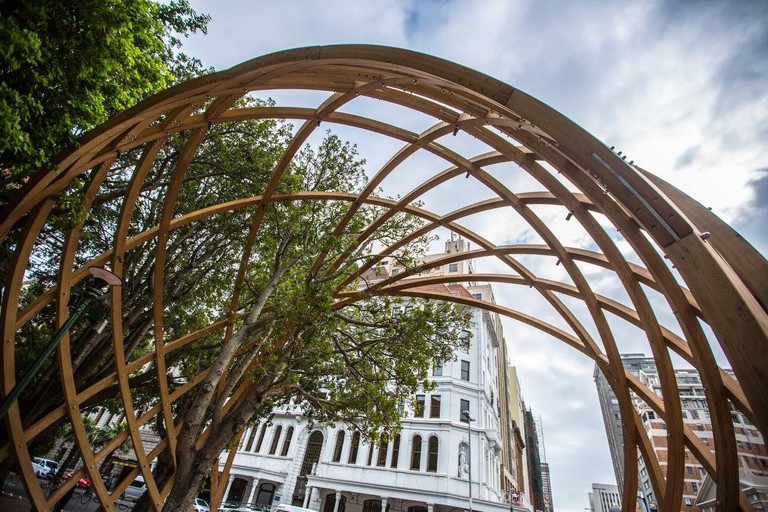 The name Arch for Arch is a clever pun – the wooden structure, which was designed by Norwegian architects Snøhetta, commemorates the life and work of Archbishop Desmond Tutu, whose nickname is ‘The Arch’. Tutu, who won the Nobel Peace Prize in 1984, is one of the most celebrated South Africans of all time and has a personal connection to Cape Town, as he was the city’s first black archbishop. The beautiful, light structure carrying his name was unveiled in 2017 and is located next to St George’s Cathedral. Its design welcomes interaction and is open to everyone, a fitting tribute to a champion of human rights and a key figure in the fight against apartheid.

Journey through the city at Es Devlin’s ‘Zoetrope’ 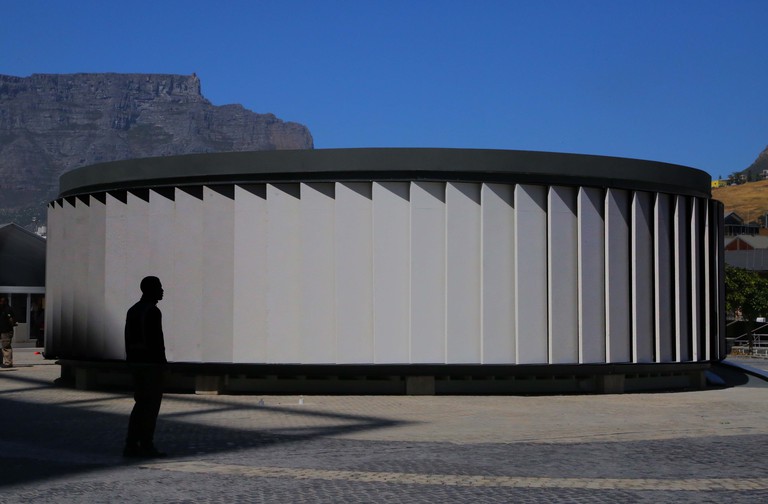 A visit to Cape Town’s vibrant V&A Waterfront area would not be not complete without checking out Es Devlin’s interactive installation Zoetrope (2018). The solar-powered pavilion houses a theatre that screens 12 one-minute films, which were made by Devlin in collaboration with South African filmmakers. The films depict locations close to the site and showcase everything from a football match on a rooftop to an underwater kelp forest, while the pavilion itself was constructed from concrete made using sand sourced from the featured locations. Devlin’s creation was commissioned by Mercedes-Benz South Africa and aims to take visitors on a journey through the films. It envisions a future where solar-powered, site-specific installations function as a “charging station for the mind of the driver”, and is open, free of charge, until 1 November 2019. 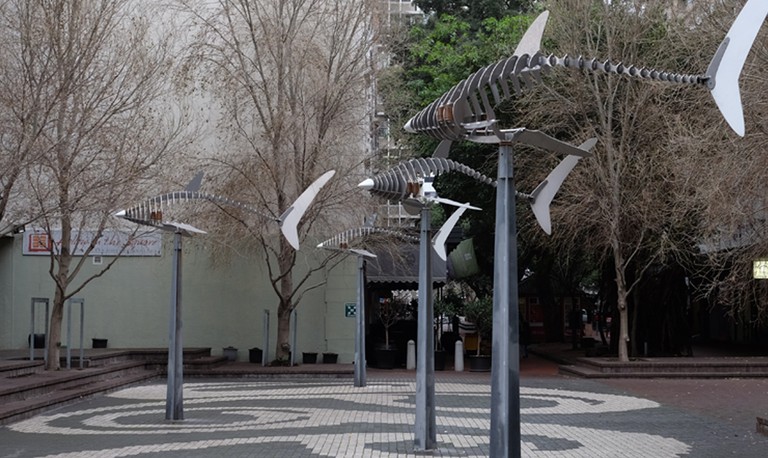 The ‘Ghost Sharks’ sculptures are in Cape Town’s Foreshore | © Andrew Thompson
Cape Town’s Foreshore may not be the most picturesque. In spite – or perhaps because – of this, it’s home to some of the city’s most intriguing public art. Ralph Borland’s Ghost Sharks (2005) installation sits in the middle of the public space on Jetty Square. The group of five skeletal shark sculptures float three metres (10 feet) above the ground, and though initially designed to follow passersby via built-in motion sensors, they now just seem to pivot ominously with the changing winds. The installation is particularly appropriate given that the sculptures are situated on reclaimed land, which is represented by a motif of bricks that reference the ocean waters that once swirled below.
Open In Google Maps
Jetty Street, Foreshore, Cape Town, 8000, South Africa
Give us feedback 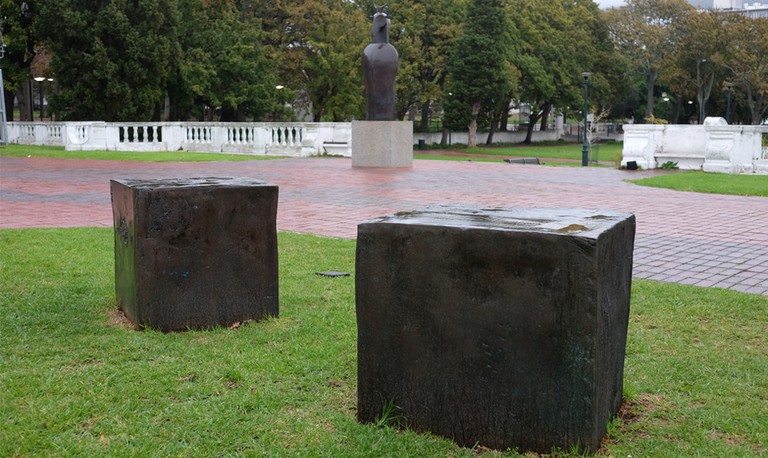 People often use Rosenclaire’s ‘Soap Boxes’ as platforms for debates, performances and silent protests | © Andrew Thompson
The grounds outside the South African National Gallery are no stranger to unusual and thought-provoking public art, and Rosenclaire’s Soap Boxes (2003) is no exception. The two bronze boxes sit inconspicuously adjacent to the gallery steps, and turn the typical public art approach on its head by offering people podiums for debates, performances and silent protests.
Open In Google Maps
Government Avenue, Cape Town City Centre, Cape Town, 8000, South Africa
Give us feedback

Look out for ‘Human Sculptures’ among the crowds 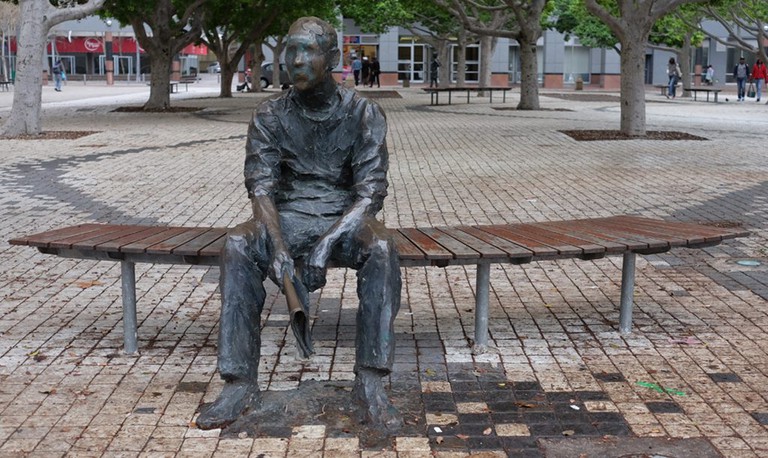 Egon Tania’s ‘Human Sculptures’ blend seamlessly into their surroundings | © Andrew Thompson
Renowned South African artist Egon Tania has contributed to the transformation of the city’s Foreshore region with a selection of lifelike statues. The sculptures, which depict people reading newspapers and talking on mobile phones, blend into the surrounding bustle of the square – so much so that it’s easy to mistake them for real Capetonians. Tania’s sculptures add personal charm to an otherwise unremarkable public space.
Open In Google Maps
31 Heerengracht Street, Cape Town City Centre, Cape Town, 8000, South Africa
Give us feedback

Get close to a slab of the Berlin Wall, a genuine piece of world history 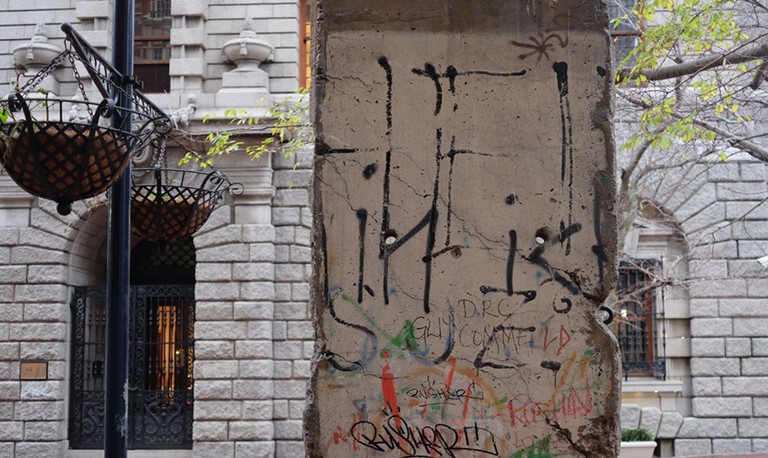 Nelson Mandela was given the piece of the Berlin Wall in 1996 | © Andrew Thompson
At the top of the often frenetic St George’s Mall is a humble piece of the Berlin Wall that many hurried visitors fail to even notice. The German government gifted the slab of concrete lifted from the wall to former president Nelson Mandela following a visit to Germany in 1996. Though an unconventional piece of public art, its location and placement has been carefully considered. Set outside the Mandela Rhodes Building, and positioned to point down St George’s Mall, it’s almost deliberately easy to miss, but its influence on passersby who stumble across it appears to be more profound as a result.
Open In Google Maps
St George’s Mall, Cape Town City Centre, Cape Town, South Africa
Give us feedback 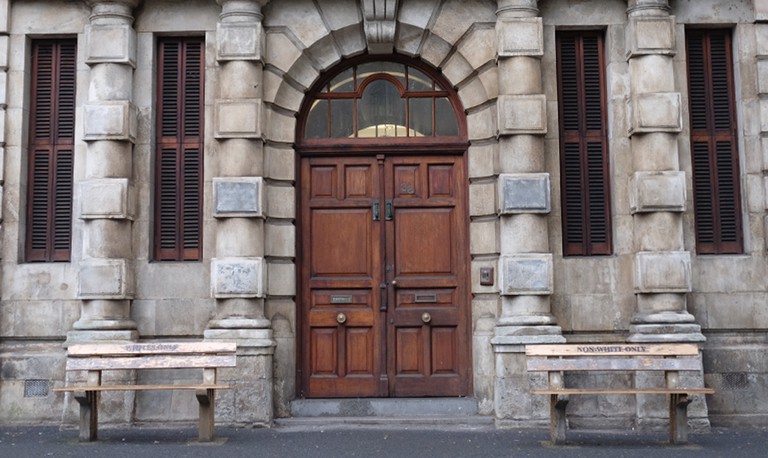 Take a break on a bench installed and decorated by Rock Girl, a group working hard to protect women from abuse

Rock Girl is an impressive organisation that creates both symbolic and real safe spaces across South Africa. They partner with artists, who create striking benches in symbolic locations and pair these with physical safe spaces for vulnerable girls and women. You’ll find the benches dotted throughout Cape Town, including Signal Hill, The Company’s Garden, St George’s Mall and the Cape Town International Convention Centre. Each bench is worth engaging with for its artistic beauty, as well as its greater role in a city where violence against women and girls is all too prevalent. 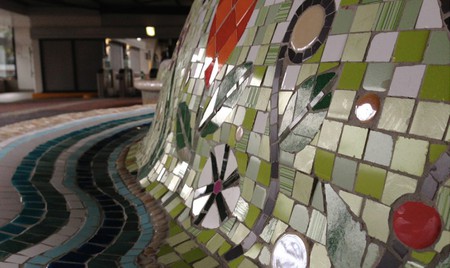 Cape Town’s mass bus-based public transport system, MyCiTi, is a triumph for public art in the city. Local artists have transformed most of the city’s major stations into vibrant works of art. Though easy to miss if you’re commuting to and from work, as a visitor it pays to slow your day down and take in the beauty at most fixed bus stations in and around the city.