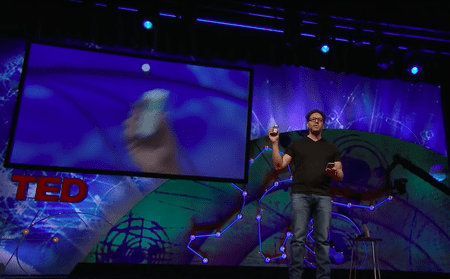 Toby Shapshak: You don’t need an app for that | © TED Talks

South Africa is full of inspiring individuals and impressive success stories. Many of these don’t receive the attention they deserve. In recent years, TED (Technology, Entertainment, Design) has provided a platform for people from South Africa to share their unique insights on both global and local problems. Here are seven inspiring TED Talks that highlight just some of the country’s entrepreneurial successes and untapped resources.

Ludwick Marishane: A bath without water

Ludwick Marishane’s story is an inspiring one. Not only because he developed a remarkable product that solves a significant problem around in the developing world. But also because as a young, motivated entrepreneur with limited resources, he was able to channel his passion and enthusiasm to create a groundbreaking product. In spite of his limited resources, his TED Talk, given in Johannesburg in 2012, makes it clear that what he has done is no different to how many entrepreneurs around the world respond to similar problems. He also offers some inspiring quotes for aspiring entrepreneurs. “On the gravel roads of Limpopo with an allowance of R50 per week, I came up with a way for the world not to bath,” he says towards the end of his talk. “What’s stopping you?”

Boyd Varty: What I learned from Nelson Mandela

Though titled “What I learned from Nelson Mandela”, this talk by Boyd Varty’s is more about perseverance, loyalty and unity. Varty, who grew up in the South African bush, had a close relationship with wild animals and the people who live among them. He shares two stories about his childhood that relate to the somewhat overused term of Ubuntu. But considered in the right context, these tales will serve as inspiration for a wide slice of life, including business.

Toby Shapshak: You don’t need an app for that

South African tech journalist Toby Shapshak used his talk at TED Edinburgh to shed some light on just how many technological advancements have emerged from the African continent. As Shapshak points out, many people around the world still see Africa as “The Dark Continent”. He debunks this myth of Africa being a technological backwater, and instead spreads an inspirational message with real-world examples of just how industrious and genuinely innovative the continent is.

Social entrepreneur Bruce Dube opens his TEDxPretoria talk with a story that could fit into many global societies. He was trapped in a job he hated and realised it was leaving him feeling largely frustrated and unfulfilled. From there, his story is anything but ordinary. He speaks about his life from childhood to adulthood, and how he was able to capitalise on digital and social media and South Africa’s demographic dividend. It’s a remarkable story about seeing a gap and taking it, regardless of your personal background or situation.

Vusi Thembekwayo is one of South Africa’s most respected entrepreneurs and public speakers, and his inspiring TEDxUniversityofNamiba talk highlights some of the country’s best ideas. At the same time, he identifies just how much potential remains untapped in the country. By drawing on successful small businesses and their limited large scale success, he attempts to provide guidance, suggestions and real world examples on why there is no reason why small entrepreneurs can’t turn their operations into big business.

Kopano Matlwa Mabaso: What to do when a moonshot falls short

South African doctor Kopano Matlwa Mabaso talks about how she and friend Chrystelle Wedi had a vision of setting up mobile ultrasound scan clinics in remote parts of Africa. These clinics have the potential to save thousands of lives across the continent. But everything did not go as they expected. Mabaso’s talk is a sobering reminder of the difficulties many African women still face, how social entrepreneurs play a critical role on the continent, and how difficult it can be to succeed. More than anything, it’s a talk about how to pick yourself up and keep going in the face of setbacks and adversity.

Elon Musk is the poster child for South African entrepreneurial success. Though Musk is without doubt the country’s most prolific entrepreneur and businessman, many around the world are unaware that he had his start in South Africa. Though this is not a traditional TED Talk, the insights and interviews that Musk shares during the TED interview are not only fascinating and insightful, but should serve as inspiration for any entrepreneur, South African or not.