South African wildlife faces a huge threat from poachers, numbers of which seem to increase every year with the rise in demand for ivory around the world. The continued success of private game reserves like Kwandwe might be the only way to keep entire species from becoming extinct within our lifetime.

The safari jeep presses on through thick shrubland, over plants, river beds and termite mounds. Each customised Toyota is equipped with tough suspension, roll cages and a spotter’s chair on the bonnet. It comes to a shuddering stop by a thicket surrounded by black rhino dung, so pungent you know it’s fresh.

The rangers hop out taking the wooden, single-action rifle with them and untying a small sock knotted at one end from their belts. A quick flick of the wrist releases a small cloud of talcum powder and ash, revealing the wind direction.

‘This way,’ says the head ranger. ‘And be careful not to kick any rocks or step on any branches. The whole point is to be in and out, without the animal ever knowing you’re there.’ It’s not rhino that the rangers and their group are there to track, but rather two elephants spotted feeding on the slopes ahead – the mineral-rich bark and sweet leaves are irresistible to these modern-day mammoths.

Inching their way single file through the shrubland, the safety of the jeep now far behind, the head ranger’s raised hand signals the group to stop. Cupping hands to their ears, they listen for the unmistakable sound of feeding elephants, first the crack of the branch and then the gentle chewing. They’re close, but in this thick vegetation it’s hard to tell exactly by how much. 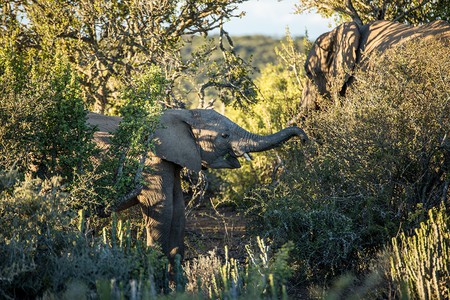 On walking safaris like these, groups sometimes startle unsuspecting animals taking shelter in the bush. It’s when caught off guard that even docile game can become dangerous. On this occasion the group moves like ghosts through the thicket, careful to stay downwind so the animals don’t know they’re there.

This is just one of the close encounters with wildlife you’ll experience at a private game reserve like Kwandwe. A two-hour drive from Port Elizabeth on the Eastern Cape, Kwandwe is home to thousands of species, including cheetah, antelope, ostrich, jackal and the ‘big five’. 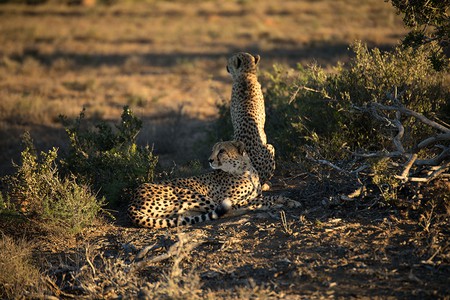 A coalition of cheetah relaxing before a hunt | © Culture Trip

Bought in 2012 by American oil and shipping magnates, the reserve covers 22,000 hectares (54,363 acres) – an area almost the size of Malta. In the last few decades, private game reserves have become one of the only ways to secure the welfare and continuing repopulation of endangered species in Sub-Saharan Africa in a never-ending war with poachers.

The Kowie River basin, not far from Kwandwe’s borders, was once roamed by elephants and buffalo, but after early European settlers drove them out or killed them for ivory they haven’t been seen for 300 years. Last month a herd of 10 elephants were reintroduced to the basin, including two bulls from Kwandwe. 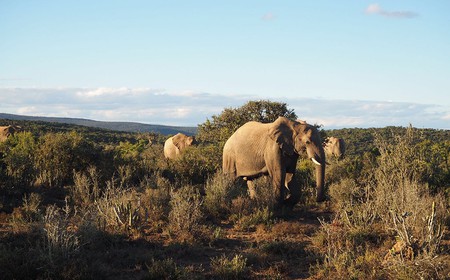 A herd of elephants moves through the bushveld | © Culture Trip

‘The difference between South Africa and Eastern Africa is the approach to sustainable utilization,’ says Kwandwe’s General Manager Graeme Mann. ‘In the 1930s strict conservation in Kenya saw numbers plummet. In the same period, South Africa has seen numbers rise by 70%.’

It’s in the interest of private owners to protect their investment – female white rhino cost anywhere between 1.8 million and 2.5 million rand (UK£105,000–UK£150,000) – meaning tougher security and better medical care. A helicopter patrols the reserve twice a day and there are look-out towers with powerful telescopes manned around the clock. 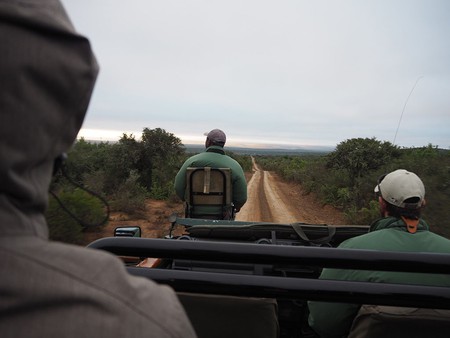 If a lion falls ill in Kwandwe it will be sedated, treated by veterinarians and released back into the wild without the animal ever knowing. The laws of nature still apply but there needs to be the occasional helping hand to protect this delicate ecosystem, which can take years to find balance.

Kwandwe is small enough to be managed by a team of 60 full-time staff including rangers, spotters and anti-poachers. Take a national park like Kruger, at two million hectares it’s almost 100 times the size – policing such an enormous area becomes nearly impossible. 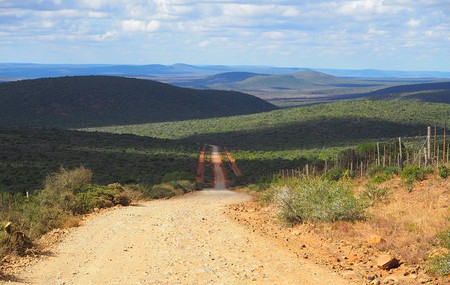 Privately run concessions within Kruger look after their own game, but the government funded agencies – like all-female patrol unit the Black Mambas – tasked with keeping at-risk animals safe in the rest of the park have to be eternally vigilant. Poachers are increasingly well equipped and use legal loopholes to escape conviction.

With powdered rhino horn selling for US$1,000 per gram on the black market and exported to the Middle East and Asia, where it is used to make daggers and other carved ornaments, it’s no wonder that white rhino have been given 15 years until they’re rendered extinct. 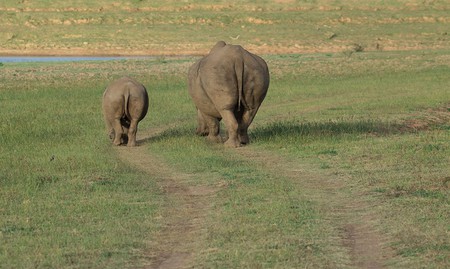 A mother and baby rhino go for a walk | © Culture Trip

According to Save the Rhino, poaching has skyrocketed since 2008 and it is estimated that a rhino is killed every seven hours for its ivory. After years of debate, the South African government has made it legal to trade rhino horn in the hope that better regulation and a crowded market will deter opportunists from killing wild rhino. The horn, made from keratin, can just as easily be cultivated in a breeding farm without harming the animal.

A private game reserve like Kwandwe, which also happens to be one of Africa’s most stylish safari lodges, is the closest you can get to these amazing creatures in the wild. Educating local communities is also key to the survival of these private projects. Rhodes University in nearby Grahamstown planted 80 cameras around the reserve to study the behaviour of leopards and many students carry out their postgraduate research on animal behaviour here. 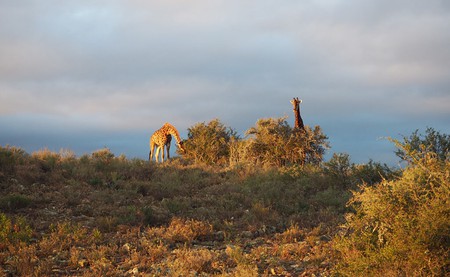 A journey of giraffes feeding in the evening sun | © Culture Trip

‘A private game reserve like Kwandwe will never be as profitable as a hunting or breeding farm,’ says Mann. ‘If you wanted to turn it into a money making machine you’d add another four lodges and have 30 vehicles packed with tourists.’

‘In hospitality sometimes conservation comes secondary to community projects, but if done properly, one will follow the other.’ It seems as though these privately funded reserves might hold the key to ensuring that South Africa’s incredibly diverse wildlife is around for future generations to enjoy.

To organise tours to Kwandwe and more, visit rhinoafrica.com. Africa’s leading tour operator, based in Cape Town, specialises in tailor made travel experiences in Southern Africa.