South Africa's 10 Young Artists and Where to Find Them

South Africa boasts a wealth of artistic talent and the new crop of artists are no exception. All under 35, these artists explore concepts ranging from fashion and identity politics to observations of the past and present. As varied in their mediums as they are in their concerns, these artists represent just a selection of the variety of work emerging from South Africa today. We discover more about the ten best young artists in South Africa. 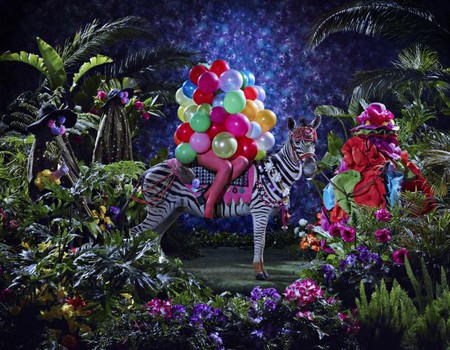 Athi Patra-Ruga, The Night of the Long Knives, 2013. Archival inkjet Print on Photorag Baryta Edition of 5 150 x 190 cm 2013. Courtesy of the artist and Whatiftheworld

Athi Patra-Ruga is fast becoming one of South Africa’s most sought-after artists. He was named as one of the 100 best artists under the age of 33 in Phaidon’s ‘Younger than Jesus’, his work has been featured on the cover of Art South Africa magazine and he featured prominently at the recent 1:54 Contemporary African Art Fair in London. Patra-Ruga works across a range of genres, interrogating fashion, performance and art. His work is jarringly bright and colourful, with intentionally clashing prints and textures. In The Future White Women of Azania Saga – his most recent solo show in Cape Town – he explored ideas of utopia and dystopia in the context of post-apartheid South Africa. With his bold style and underlying sense of humour, he seamlessly merges history, pop culture and mythology, creating a body of work that engages with contentious issues in contemporary culture.

Athi Patra-Ruga is represented by: Whatiftheworld 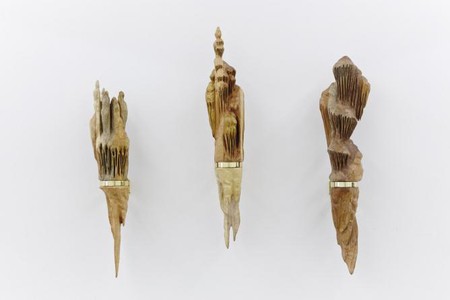 Daniella Mooney, The Road to Eleusis with Demeter and Persephone, 2014. 9 wood varieties, 193 x 262 x 50 cm. Courtesy of the artist and Whatiftheworld

Working predominantly in sculpture and installation, Daniella Mooney manages to effortlessly combine the monumental with the ephemeral, the natural with the mystical. She uses materials including wood, stone and crystal in her work, emphasising mankind’s relationship with these differing mediums, creating a reverence for the natural world. The beauty of her works belies the complex ideas of mythology and narrative that she explores. Everything is considered – light, sound and space all play an integral part in her installations. With two solo exhibitions to date, we can hope to see more of Mooney’s thoughtful and engaging work in the future.

Daniella Mooney is represented by: Whatiftheworld 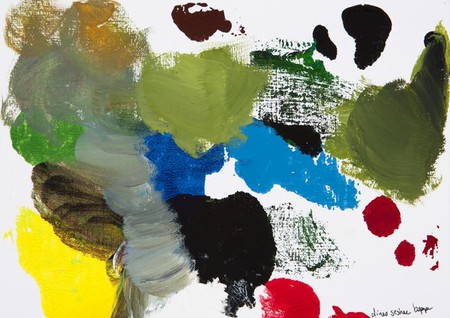 Dineo Sheshee Bopape has lived and worked all over the world, studying in South Africa, Amsterdam and New York. She integrates drawing, painting, performance and installation into her layered artworks, drawing on her own experiences to explore issues of gender, identity and race. Her installations are bright, garish and full-bodied. She creates an immersive environment in her artistry, combining video work with cluttered objects. Each object alludes to a deeper meaning, yet a clear explanation always remains just out of reach. Bopape’s works invites the viewer to attribute their own interpretation to her deeply personal explorations. 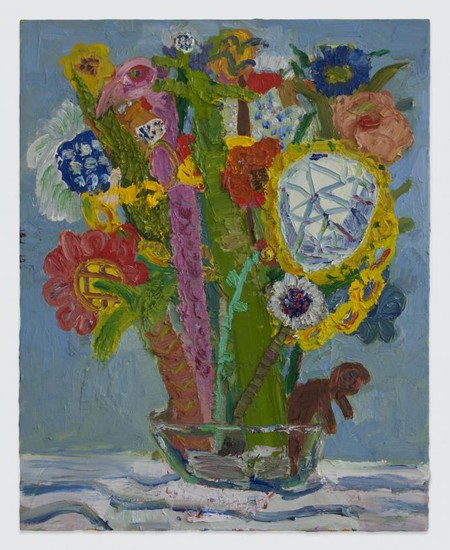 Georgina Gratrix is well known for her distinctive paintings, but thanks to an ongoing collaboration with Warren Editions in Cape Town, she also has an impressive collection of prints. Her loose, playful style, with thick layers of impasto paint is instantly recognisable. Gratrix explores notions of celebrity, personality and pop-culture in relation to the history of painting, with subject matter and titles that humorously gesture towards contemporary life. Represented by SMAC Gallery in Cape Town, she has participated in multiple exhibitions in South Africa and abroad. 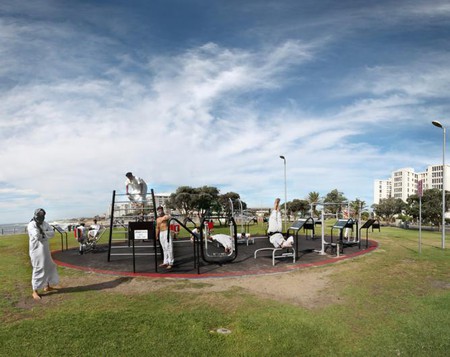 Twin brothers and artistic collaborators, Hasan & Hussain Essop already have an extensive body of work at the young age of 29. They use photography to create narratives and characters; telling a story in each image. They describe their work as exploring the stereotypes of East and West, two cultures that loom large in their daily lives. They use their personal experiences to inform the images, while at the same time inviting the viewer to explore their own preconceptions. Their work is a personal exploration into the many cultural indicators relevant to their lives as part of the young Muslim community in Cape Town, critically examining the meaning in the multitude of cultures surrounding them.

Hasan and Hussian Essop are represented by: Goodman Gallery 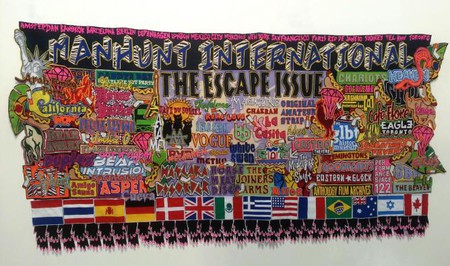 A relative new-comer, Jody Paulsen is the youngest artist on this list. Having graduated with a Masters in Art in 2013, Paulsen has been making a name for himself ever since, both through art and fashion. Exploring consumerism and the culture surrounding it, Paulsen creates vibrant, layered felt collages with clashing colours, featuring many recognisable logos and brands. Paulsen’s clear fascination with fashion and brands is evident, demonstrated through his collaboration with South African label Adriaan Kuiters for a collection shown at Mercedes Benz Fashion Week. As an artist at the beginning of an exciting artistic career, Jody Paulsen is already one to watch.

Jody Paulsen is an associated artist at Brundyn+ 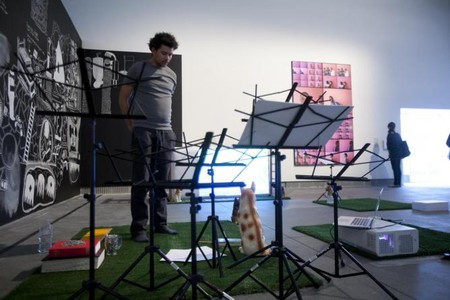 Kemang Wa Lehulere, The Grass is Always Greener on the Other Side, 2014, Installation. Yerba Buena Center for the Arts, San Francisco, USA. Courtesy of Stevenson.

Kemang Wa Lehulere works with drawing, installation and performance. He uses these mediums to explore the personal and the historical, focusing on the unreliability of memory. His works can be monumental or small, both ambitious and impermanent. Using himself in many of his performances to enact the process of digging, he simultaneously uncovers and destroys. By performing the work himself, he looks at his personal narratives, while making the viewer implicit in this mutual uncovering and destruction of an archive. Looking at the past and the future, and the impermanence of both, Wa Lehulere’s work forces us to look at the narratives we subscribe to and create. 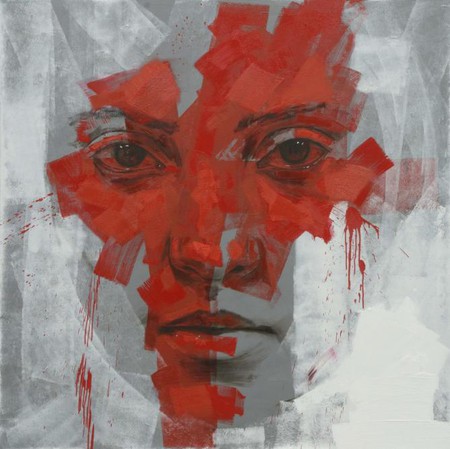 Widely collected and exhibited in art fairs around the world, Lionel Smit’s monumental works remain ever-popular. His large portraits combine realism with expressive mark-making and bold colour. The closely-cropped faces of Smit’s portraits often look directly at the viewer, their strength enhanced by the striking colours and thick brush-marks. Smit’s bronze sculptures evoke the same strength as his paintings: ‘Morphous’, shown recently at CIRCA in Johannesburg, is a huge two-headed bust of a woman. Smit translates the expressive brushstrokes of his paintings in the surface of the bronze, the texture of the sculpture echoing his iconic painting style. Chosen as the face of the BP Portrait Awards in London in 2013, Smit’s work is as celebrated internationally as it is in his home country.

Lionel Smit has is represented by multiple galleries worldwide, including: Everad Read 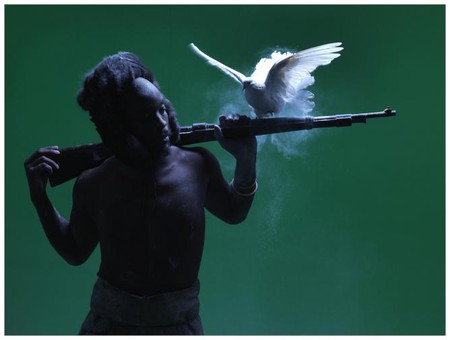 Mohau Modisakeng is a young South African artist who attempts to directly address the historical issues of racism in South Africa. Working with sculpture, video and performance, the artist often features in his own work. His work is highly symbolic, using cloth, land and weaponry to reference colonialism and conflict. He does not shy away from contentious issues in South African and African society, instead using his art to question and bring attention to them. Bravely forcing his audience to confront issues of identity and race, his work is powerful in its symbolism. As well as exhibiting extensively in South Africa, Modisakeng has exhibited in art centres around the world, including New York, Basel and London. 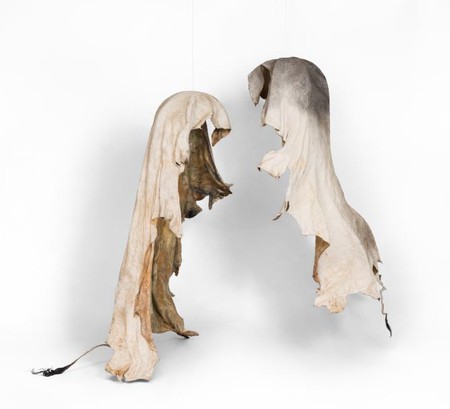 Nandipha Mntambo has exhibited extensively in South Africa and internationally, her sculptural works having captured the imagination of audiences worldwide. Born in Swaziland and based in South Africa, Mntambo works with personal ideas of history, heritage and culture. She is most well-known for works using cowhide, where she actively subverts the traditional cultural uses associated with this medium. Modelling the hide on the female body, she creates mystical sculptures that both allude to a physical body whilst pointing to the lack of one. Mntambo likes to play with the attraction and repulsion that cowhide evokes in the viewer. Rather than her works being read in simplistic terms, as merely cultural or feminist explorations, she encourages ambiguity in the reading of her works. For such a young artist, she already has a well-established body of work and will no doubt continue to be a prominent figure in the art world.

Nandipha Mntambo is represented by: Stevenson