The Unexpected Origins of South Africa's Most Important Textile 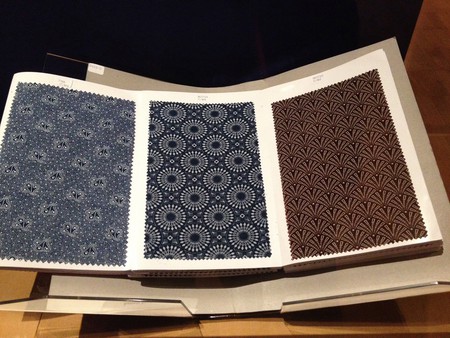 Shweshwe is South Africa’s most important textile, even though it has its roots deep in the indigo garment trade of 17th-century Europe. Few would have predicted that the rolls of indigo fabric would ultimately be considered to be as timeless and versatile as the likes of denim and tartan.

As South African as shweshwe is now, the cloth is not indigenous to the country. Shweshwe actually evolved from indigo-coloured textiles that arrived along with the continent’s first settlers in the mid-1600s, although in its present form it is considered almost entirely South African.

The material was initially only available in indigo, but now comes in various colours. Since its early days, the fabric featured intricate and repetitive white-patterned designs, which are still a defining element.

Settlers often clothed slaves, soldiers and Khoi-San in these indigo textiles, most of which came from either the Netherlands or India, and it slowly spread across the country – usually surrounding mission posts in remote destinations.

At that stage, indigo was still extracted from plants, and was only rarely used in clothing. It was only in the 18th century that a German chemist developed synthetic indigo, and around the same time, European manufacturers developed a reliable way to print patterns on the fabric, which would ultimately give shweshwe its distinct look.

The story then goes that French missionaries working in Southern Africa in the 1840s gifted the fabric to the then king of Lesotho, Moshoeshoe I. Shortly thereafter, the fabric became known as shoeshoe, later changing to the present-day name.

The epicentre of shweshwe in South Africa has always been the Eastern Cape, thanks in large part to the German settlers who wore the fabric, which was reminiscent of the Blaudruck fabric that they knew from back home.

Xhosa women who were influenced by the settlers in the Eastern Cape absorbed European styles into their own clothing, and slowly the textile’s popularity spread throughout the country. As it did, so it took on various cultural meanings and uses.

Shweshwe’s traditional use is primarily for celebratory dresses worn on special occasions such as birthdays and weddings – a tradition that remains to this day. But its usage has since expanded to be incorporated into everyday items like blankets, aprons, dishcloths and other household items.

Though shweshwe’s popularity may have waned in the late 1990s, this has started to change, and it is now back in vogue. In 2013 it featured in an exhibition in the British Museum, and its appearance in the television show The No. 1 Ladies’ Detective Agency, as the textile of choice for lead character Mma Precious Ramotswe, saw it catapulted back into the global spotlight.

As shweshwe’s popularity has grown, so there’s been an increase in fake materials flooding the market. Factories in the Far East have been accused of counterfeiting the original material, even going so far as to produce patterns incorporating famous South African political leaders.

Officially speaking, however, there’s only one authentic shweshwe in the world, and it comes from a factory in South Africa’s Eastern Cape province. Textile company Da Gama Textiles purchased the sole rights to the iconic ‘Three Cats‘ designs in the mid-’90s, and they are now the only company authorised to produce the original. They print up to five million metres of shweshwe per year at this factory, and they currently have their hands full protecting their trademark, with much of the material now on the market considered counterfeit. 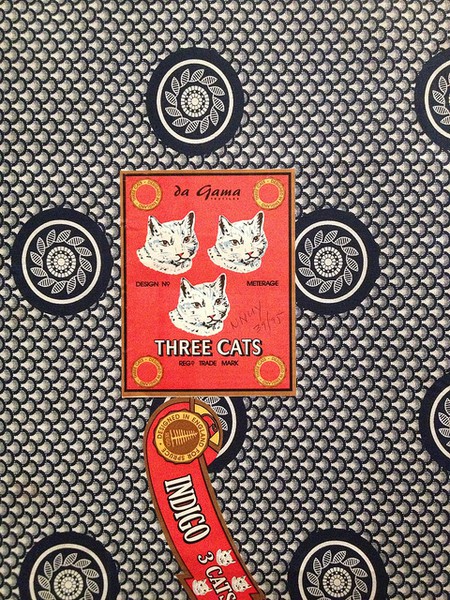 Still, according to those in the know, it’s easy to tell the difference between authentic and knock-off shweshwe. The original material has a distinctive smell, feel and even taste. Unwashed, it also has a trademark stiffness – a throwback to when it was starched to prevent damage from damp while being transported by ship from Europe. Cheap knock-off shweshwe retains this stiffness after washing, and designs often fade, which are clear signs of inauthenticity.

Fortunately, there’s another way for purchasers to examine authenticity – all items of original shweshwe from the Eastern Cape factory have a Three Cats backstamp.

In an attempt to maintain relevance in the current market, parent company Da Gama Textiles has introduced a range of new designs, many of which are tied to current affairs and South African political icons. Da Gama has released commemorative ranges for the likes of Archbishop Denis Hurley, struggle stalwart Albertina Sisulu and Nelson Mandela, which they sell as extended fabric rolls or made up into various fashionable items.

Although shweshwe has its roots deep in the European textile trade, it’s all but shrugged off its past and has become a textile that is now synonymous with South Africa. With these limited editions celebrating iconic South African figures, and its incorporation into a wide range of everyday items, it’s remaining both relevant and true to its early days on the continent.