Portrait of an Artist | Marlene Dumas

At first glance, South African Marlene Dumas’s art may seem shocking, titillating or offensive. She is known for paintings of strippers and for broaching tense subjects such as race. One of her paintings once drew the highest price at auction for a living woman artist. While the sensationalism may be unwarranted, there is good cause for the brouhaha. We learn more about Marlene Dumas and her insightful study of portraiture. 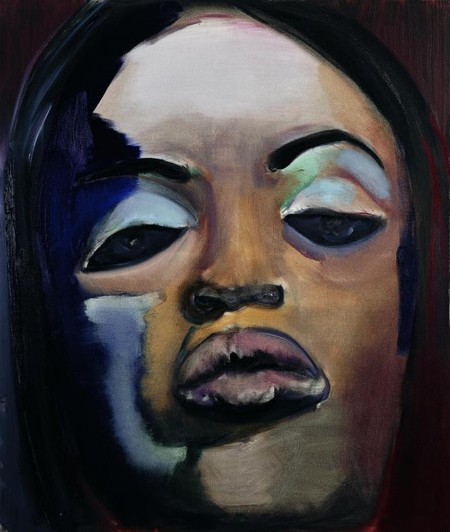 ‘Naomi’ (1995) is an intriguing painting, half beckoning, half shy. It has the screen-print look and pop culture reference of an Andy Warhol. It does not stare at you with the sultry come-hither of his ‘Marilyn Diptych’(1962) however, nor the vacant smiles of his other prints. This woman meets our gaze, but cautiously from under lowered lids. As viewers, it makes us a little more subservient to the image, a little less able to take charge of what we look at. Its vivid coloring, so similar to ‘Marilyn’, takes Warhol back to the paintbrush and suggests the work of artistry that goes into creating a painting and the making of a cultural icon.
In works like ‘Naomi’, with insouciance and delicacy, depth and flippancy, Dumas’s work explores what it means to look at people in pictures – to paint a model, to look at a painting of a person, to model, to be painted, to show, to stare back from a painting, to look at a picture of a painting of a person, to paint from a picture of a painting of a person – somehow to connect with that person at whatever remove they are in the specificity of their situation and ours, or not, and the distortions, subversions, fictions and beliefs these induce. As viewer, artist, intentional or unintentional model, Marlene Dumas asks, how do we feel the weights and responsibilities of these relations?
Marlene Dumas was born in Kuils River near Cape Town, South Africa, still under apartheid in 1953. Her South African language was Afrikaans and she studied at Cape Town’s Michaelis School of Fine Art before moving to Amsterdam on a scholarship to study at de Ateliers in 1976, a school that has artists teach artists.
At first, Dumas worked with collages, but shortly after she turned definitively towards painting and portraiture. From about the eighties, her work began to show portraits worked from polaroids and photographs of herself and her friends, from magazine and newspaper clippings. In pale ink washes and smudgy oil on canvas, Dumas had already begun to evolve the signature perspectives she would become known for. 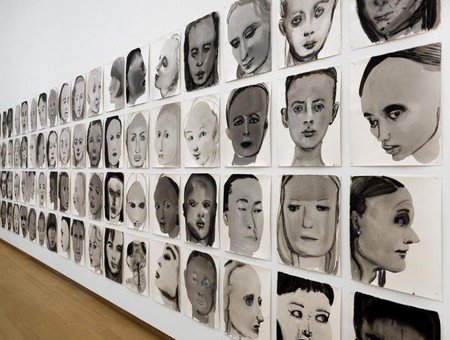 A painting like ‘Models’(1994) shows us some of the preoccupations that imbue Dumas’s work. ‘Models’ is displayed as a large installation in a Warhol-like assembly. Unlike Andy Warhol paintings however, where perception stops at the celebration of the link between art and commercial reproduction, Dumas leads us back from the artful commodity to the person or the fiction of the person.
‘Models’opens up a conversation about turning women into subjects or objects, whether in the media or art. But unlike Warhol’s Campbell soup tins or Madonna visages, where a single iconic reproduced image fills every frame, ‘Models’puts together images of recognizable cultural and political figures, as well as Marlene’s friends. The work speaks at many levels. It speaks of the endless variety and individuality of female archetypes. It also marks for us the acts by which we recognize certain individuals and not others, or what we recognize individuals as and how the ways we look changes in each case. It asks what might be the measure, the convergences and rifts, between a portrait, the subject of the portrait and the person it might refer to. 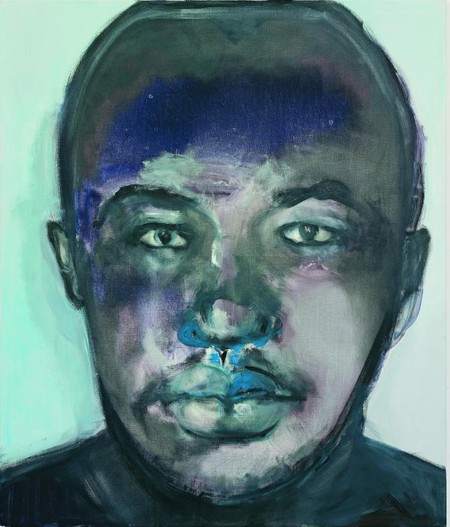 To understand this process further, it helps to listen to Dumas describing the painting of her friend in ‘Moshekwa’(2006) which, she explains, rises from somewhere between her knowledge of his character as an artist and friend, and the simultaneous acknowledgement that his character cannot be pinned down. She says, ‘the essence of life is mysterious’ and states, ‘I am not trying to categorize and define something in a static way’.
Dumas’s paintings are always conscious of these lags between painter, viewer and subject, and the critique and creativity they engender. Sometimes, a painting might refer to a construct a portrait can evoke instead of persons themselves. ‘Dead Marilyn’(2008), it is suggested, is less about Marilyn than a consideration of death and mourning. The painting relates to other depictions of mourning, like the woman in ‘The Mother’(2009) mourning her dead son, painted after the death of Dumas’s mother. 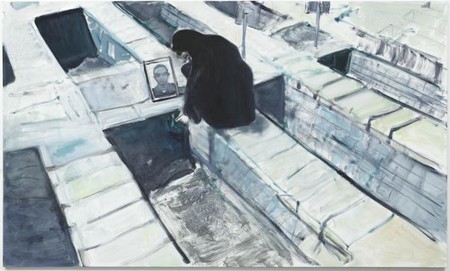 In these and other portraits, Dumas delves into the crucial experiences of human life, of death, birth, eroticism, weeping and joy. Or, paintings like those of Osama Bin Laden and Lawrence of Arabia (from the film where he is portrayed by Peter O’Toole, but also painted by Augustus John) attempt to query the viewer about who they see in these faces rather than suggest a particular aspect to them.
In works like ‘Naomi’ and ‘Models’, Dumas discusses celebrity and iconography. She is also sensationally known for her work with voyeurism and images that border on pornography. Many of these are however, really a continued discussion, a psychological quest, to understand what is transacted in a look.
Dumas began painting strippers during her early years in Amsterdam and continued that conversation in some of her later work. She explains this as understanding the gaze of the viewer and what is shown by the one viewed when she writes, ‘I don’t know how I look when I look at you’. She recalls too the early stages of the search for the subjectivity of a woman artist when she tried to ‘use the things that women are supposed to be busy with like love stories, like being second best etc. and make that into positive things’. This instinct to face and consider the types, stereotypes and cliché’s that surround portraits of women is possibly what leads Dumas to study images of women celebrities, beauty contests and strippers, in classical art and the media. 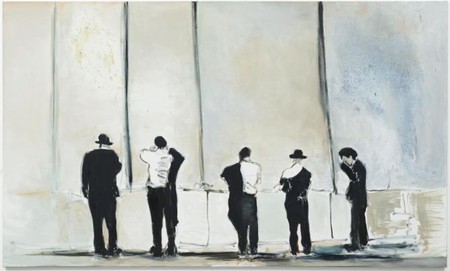 Some of these tensions are evident in a works like ‘Magdalena (Newman’s Zip)’ (2005)which creates an abstract design in response to both the figure of Naomi Campbell in the media and Mary Magdalene in Renaissance art, and ‘Head Rest’(2001)which shows the contortions of a stripper’s body, striving against the frame of the painting, to twist to reveal herself and gaze back at herself and the viewer.
‘Immaculate’ (1994) squarely frames a vaginal view, open at the center to the viewer. For a painting that appears to be quite explicit in its subject, Dumas speaks of its reticence. In a commentary on the painting she refuses to explain it too much, saying, ‘I do believe that not all things necessarily should be said, I do believe in secrets also’. She has written about it though, and the prose poem suggests themes of death, rejection, loss of emotional life, both loneliness and being alone. It notes too the response to conceptualize what is being viewed, whether in the aesthetic mode of ‘the nude’ or as the symbolic and material ‘First Cause’.
The honesty and immediacy with which Dumas paints these result in, as critic Richard Schiff puts it, images that are more alive than their photographic source and more naked than a nude. In fact, both Dumas and art critics, have noticed how in various ways, Dumas’s methodology is important to the questions she asks. By painting from photographs or images of people, and not from real life models, Dumas finds a degree of distance from the person who models and her perceptions of the person. It is in this distance that she anchors her portraits and lets them find creative life.
This exploration of how we look is equally at work in paintings of other subjects. In a 2009 exhibition entitled Against The Wall, Dumas also worked with stilllifes and figures in landscapes. Particularly noteworthy are her portrayals of Palestinans lined up against a wall being searched by Israeli policemen in ‘Wall Wailing’ and ‘Wall Weeping’ and the companion piece ‘The Wall’ showing Orthodox Jewish men at Rachel’s burial site (which also beautifully depicts their movements in putting their coats back on). 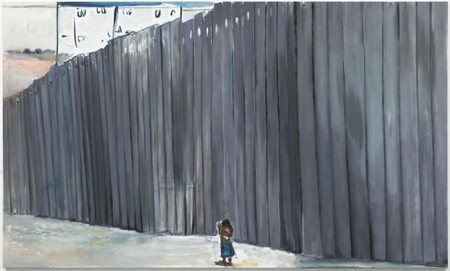 Together they suggest more than a simple comparison of Jewish freedom and Palestinan persecution. Rather, they show the common situations of liberty and oppression for both. They raise questions about the walls that might bind and release both and the complicity of images in the process.

Similarly, ‘Figure In a Landscape’features a small silhouette of a girl child all but swallowed up by the tall fence that dominates the scene. It speaks of how an identity might be formed with and against the setting in which it stands.
In an exhibition titled Against the Wall, which conceives of painting as needing ‘a wall to object to, literally,’ these images also suggest an analogy between human situations and portraiture, and the complex process and the creative possibilities of finding expression within a frame and against a wall.