One of the World's Oldest Men Wants to Quit Smoking 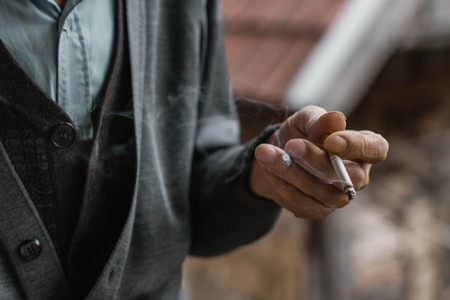 A South African man might soon be recognised as the oldest in the world, and, surprisingly, he still smokes at least two to three cigarettes a day. Even though it’s appeared to have had little impact on his health, he recently expressed his desire to quit.

Freddie Blom was born in apartheid South Africa in 1904, where he was employed as a farm labourer for much of his life. He later moved to a company installing pre-cast concrete walls, where he worked well into his eighties.

Although Blom gave up drinking alcohol several years ago, he still smokes about three rolled cigarettes per day. In spite of this, Blom is a picture of health, considering his advanced age. At 114, he only recalls going to hospital some time ago for a bothersome knee, and today he walks slowly and is slightly hard of hearing. Apart from these issues, he has no significant health complaints.

At 114, Blom is believed to be the world’s oldest living person after Jamaican Violet Moss-Brown died at 117 last year. Although the former farmworker has not yet been recognised by Guinness World Records as the oldest in the world, he is in possession of an official South African birth certificate that verifies his age.

Throughout his life, Blom survived white minority rule under apartheid and saw the arrival of a new democratic government in South Africa. He currently lives with his wife of 48 years, who is in her eighties, in the Cape Town suburb of Delft. According to Blom, much has changed there in recent years due to gang violence and crime – a problem he did not have to deal with in his youth.

As people have learned of the man’s age, he has become somewhat of a minor celebrity in the region, with politicians, media and even neighbours popping in to pay their respects.

Although he worked hard for the majority of his life, these days he doesn’t do much. He’s still strong enough to dress himself, save for his shoes, but prefers to spend his day sitting just outside his house, where he rolls and smokes his cigarettes. Although he still enjoys this pastime, he’s well aware it’s an unhealthy habit. Talking to the BBC, he said: ‘The urge to smoke is so strong. Sometimes I tell myself I’m going to stop but it’s just me lying to myself. My chest chases me to have a puff…’