Meet The 11-Year-Old Fighting for Rhinos in South Africa 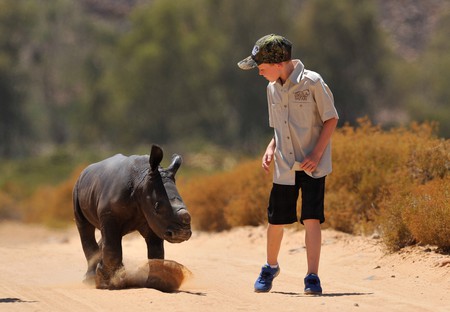 Hunter Mitchell with a baby rhino | © Save the Baby Rhino

South Africa’s rhino poaching issue has captured the world’s attention. According to official figures, 1,028 rhinos were poached in 2017 alone. Now, 11-year-old South African Hunter Mitchell has decided to take matters into his own hands, and he is fighting back against the scourge of the poachers.

After Capetonian Hunter Mitchell met a baby rhino who’d been abandoned by its mother, he decided to raise funds to help care for the young calf. He started out by donating his own pocket money, with the humble target of raising R1,000, or £50. But in just a few months he flew past his original target, and has now raised over £11,500. 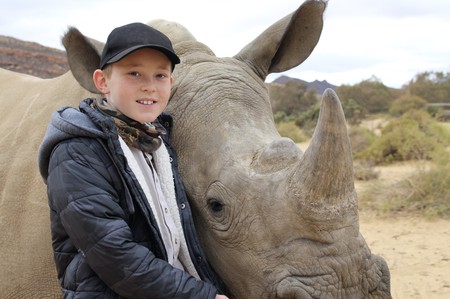 Hunter Mitchell with an adult rhino | © Save the Baby Rhino

The young activist’s work for rhinos earned him second place in the International Young Eco-Hero award from environmental organisation Action for Nature.

“In South Africa we are so privileged to be home to some of the world’s most incredible animals,” says Mitchell. “I remember when I was very little, most kids would be watching Thomas the Tank Engine or something like that on TV, but I loved watching Animal Planet or National Geographic.”

But it was on New Year’s Eve, 2015, that his interest turned into a focussed drive. “I heard about a baby rhino, Osita, that had been abandoned by his mother in the middle of the night,” he explains. “I spent the whole day waiting for updates on social media from my mom, and I was so relieved when Aquila Private Game Reserve announced that they had rescued him and that he was safe.”

It was at that moment that he knew he wanted to do something more than just be a casual observer. “Every rhino needed every chance to survive as they are so endangered, and every single rhino life is important and worth fighting for!” he says.

So he started off by donating his pocket money, and then asked his friends and family in South Africa and abroad to help.

“I was aiming for R1,000, and was so happy that after just two weeks I had raised nearly R10,000. I have now raised over R225,000 to help rescue, raise and rehabilitate orphaned and injured rhino.”

In spite of the success, Mitchell isn’t done with the project. “Through my journey helping Osita, I learned so much more about the poaching crisis facing our precious rhino,” he says. “My dream of helping to save just one rhino has turned into a goal of helping to save all of our rhino.” 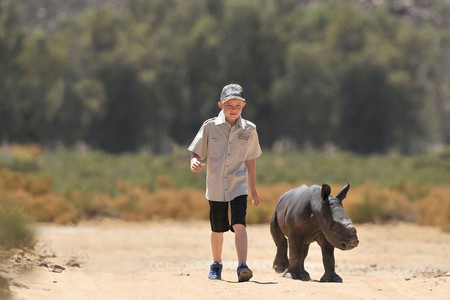 Taking a walk with a baby rhino | © Save the Baby Rhino

His passion for rhinos is now stronger than ever, and he has a special appreciation for their human-like personalities. “They can be naughty and shy and funny and cheeky, and even jealous,” says Mitchell. “They have feelings like us, and they are a massive part of our heritage and what makes South Africa unique.”

Mitchell believes that people around the world need to know what is happening to South Africa’s rhino population, and that opportunities to reverse their plight are running out. He’s particularly determined to get more young activists involved.

“We as kids are the future of our planet, and we need to stand up now and make a difference before it’s too late. I don’t want to grow up without the privilege of having these amazing animals in my future, or my children to grow up without ever seeing them in the wild.”

Mitchell’s efforts are still ongoing, and he’s encouraging anyone interested in contributing to his project, or tracking the development of young Osita, to follow him on his Facebook page, Save the Baby Rhino.