We now live in an age more globalized and digitalized than ever before, and as global tech giants like Google and Facebook begin to wield more and more control, many are complaining that they’re policing and restricting cultural practices that were around long before social media.

In many cases, this new homogenized online culture will be prescribed by people many thousands of miles away, with little knowledge of the idiosyncrasies of people around the world. It’s easy to think that because we live in a connected world, where someone from a different country or culture is just a click away, that there’s one universal standard or norm when it comes to belief systems and practices. But as large tech giants grapple with the notion of how to offer products that are respectful and representative of the world’s myriad cultures, many are starting to claim that their cultures are being censored, rather than incorporated.

Earlier this month, a group of young girls marched through the streets of Johannesburg, South Africa, demanding respect for African culture from Facebook and Google. Central to their concern was that social media companies are censoring African cultural content. In some cases, social media platforms removed videos and images that featured bare-breasted women, in spite of this being commonplace in many African cultures.

According to Lazi Dlamini, the march organizer, these moves are insulting and insensitive to African culture. Dlamini told Times LIVE that “African cultural content has been classified as inappropriate and has been removed by both companies for no valid reason. This is an insult to us because there is nothing sexual about our culture. These are Africans celebrating their culture. Google and Facebook must respect us because they are operating in an African land.”

In 2016, Dlamini launched YouTube channel TV Yabantu, which quickly gained good traction. But within a few months, the video sharing platform started flagging their videos as adult content and unsuitable for most advertisers. This had a direct impact on their channel growth, subscriber numbers, and ultimately, any advertising revenue.

Dlamini approached Google to explain that the videos were not inappropriate, but simply reflected cultural practices that have been taking place in South African for hundreds of years. Google refused to accept the reasoning, citing that bare breasts violate the platform’s standards, regardless of context.

The debate around the topic follows a similar thread to that of women exposing bare breasts in the name of protests. Earlier this year, South African women caused a stir when they protested against university fees and rape on campuses by baring their breasts. Many claimed that the actions were inappropriate, but they hit back that there is nothing sexual about the approach.

After the initial waves of protests against Google’s censorship of these cultural videos, they appeared to backtrack. After an article appeared in the Mail & Guardian, Google issued a statement saying they had lifted the restrictions as “it is not our policy to restrict nudity in such instances where it is culturally or traditionally appropriate.” 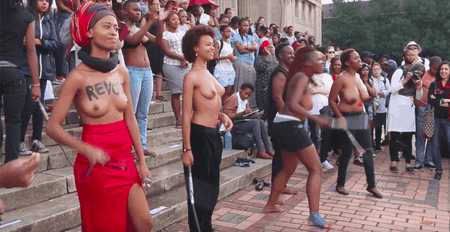 Earlier this year, women protested at universities by baring their breasts | © YouTube / CityPress

Yet it appears as if this is likely to be an uphill battle for those wishing to combine traditional cultures and practices with social media platforms. Although it’s easy for tech giants to place a blanket censorship on nudity, with nudity-spotting algorithms doing most of the work automatically these days, it’s significantly more complex to make allowances for cultural practices and nuances.

At the moment, it seems as if the approach is one that treats Western cultures as the norm, but as more people from around the world continue to join social platforms, activists like Dlamini claim international corporations are starting to police African culture, and it is becoming harder for people to hold on to traditions.

According to social activist Nobukhosi Mtshali, this censorship is also about normalizing certain nudity, such as that in music videos, and labeling others offensive. Speaking to the Mail & Guardian, she said: “I, as a South African, want to celebrate my culture. Having my photos labeled as inappropriate or regarded as porn, I take that as a direct attack on my cultural heritage. I take it as a sign of ignorance. If I’m posing in a sexually suggestive manner that is one thing, but if I’m posting pictures of me standing there in my traditional attire, that is a completely different context.”