An Introduction To Die Antwoord in 10 Songs 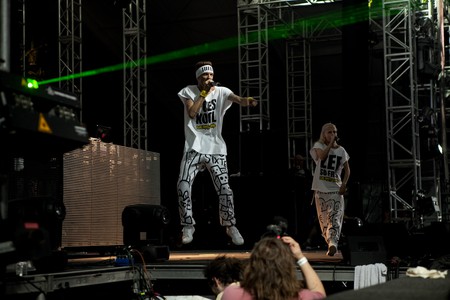 Hailing from Cape Town, South Africa, Die Antwoord is a rap-rave outfit formed in 2008 by Watkin Tudor Jones (also known as Ninja), Yolandi Visser and DJ Hi-Tek. The group rose to fame in 2009 after their music videos for Enter the Ninja and Zef Side became viral hits. We take a look at the eccentric group’s best songs.

Die Antwoord (Afrikaans for ‘The Answer’) is famous for their controversial personas and vulgar lyrics inspired by a subculture known as ‘zef’ — Afrikaans slang for ‘redneck’ or ‘trailer trash’. Their music is a combination of rap, electronica and rave and features lyrics in English, Afrikaans and South African slang. Arguably the most successful South African rap group of all time, Ninja and Yolandi are unapologetic about their explicit lyrics and contentious music videos which have garnered them a cult following.

Enter the Ninja is one of Die Antwoord’s most popular songs from their 2009 debut album $O$. The catchy track is peppered with Ninja’s fast rap lyrics while Yolandi sings the hook in her trademark high-pitched voice. Enter the Ninja reflects on zef culture and Ninja’s self-promotional status as ‘someone who is not to be messed with’. The song was listed at number 37 on the UK Music Chart in 2010. Try this video if the below is blocked in your country.

I Fink U Freeky is a popular song on Die Antwoord’s second studio album Tension, debuting at number 20 on the Billboard Dance/Electronic Albums chart in 2012. A play on the words ‘I think you’re freaky’, the techno-rave dance track sees Yolandi and Ninja wax lyrical about being the main attraction at a nightclub. In the song, Ninja’s rap style is reminiscent of an early Eminem. The black-and-white music video has since garnered more than 83 million views on YouTube.

Ugly Boy delves into ‘love’ and is as normal as it gets with these crazy two. The song is more mainstream with a strong pop sound that’s uncharacteristic for the duo, but perfect for the music video which features Carla Delevingne, Dita Von Teese, Marilyn Manson and Jack Black.

Banana Brain is the third track on Mount Ninji and Da Nice Time Kid — Die Antwoord’s fourth studio album due for release on September 16th. The song is a hard-hitting lead single that will appeal to electro-dance lovers.

In Cookie Thumper, Yolandi spurts out cleverly-written lines interspersed with overtly sexual language regarding her relationship with ‘Anies’, a bad boy and ex-convict. The song, from their third studio album Donker Mag, infers to gang culture in Cape Town and the Numbers Gang that operates primarily in Western Cape prisons.

Gucci Coochie is a track off Suck on This — Die Antwoord’s EP released in May this year. Featuring a suggestive title, the fast-paced EDM track warns men not to get involved with a woman who has expensive tastes and ‘gets everything she wants’. The song features the voice of Dita Von Teese who also appears in the soon-to-be released music video. See a teaser of the video below.

Ninja and Yolandi rap about freedom and living life without any rules in this menacing, techno-infused track from the Donker Mag album. If you’re an avid gamer, you might notice a sampling of ‘Expander’, a track from the game Streets of Rage 2.

We Have Candy is the title track on Die Antwoord’s forthcoming studio album. The song is a typically bizarre production featuring Ninja and Yolandi’s signature banter and a haunting background choir. The song makes use of typically innocent words like ‘black coffee’ and ‘lollipop’ to refer to drugs.

Pitbull Terrier samples a song from the soundtrack of the critically-acclaimed Serbian comedy, Black Cat, White Cat. The disturbing music video pictures Ninja as a man-dog who gets off his leash and attacks innocent bystanders before being killed and then brought back to life by Yolandi.