We Spoke With the Founders of South Africa's First Literary Review

Title Logo of the Johannesburg Review of Books

As we recently reported, the Johannesburg Review of Books launched in April setting out to fill “a conspicuous gap in world letters,” that of a conversation around contemporary African literarture and voices. Founded by former Sunday Times book editor Ben Williams who will serve as its Publisher, and writer and critic Jennifer Malec who will serve as its Editor, the Review will, as Williams wrote in its mission statement, “provide a new space for writers from South Africa, Africa and beyond to ruminate on culture, politics, history and the arts, publishing pieces that stand up both to intellectual scrutiny and to the great wash of information that nowadays causes all but the most memorable writing to fade.”

Williams and Malec were kind enough to answer the following questions about their new endeavor, the necessity for an African-based literary review, and their excellent first issue.

Tell me about the origins of The JRB. How long did you develop the review before you launched it? What was that process like?
Both Ben Williams, the publisher, and I have been in the South African book world for some time, and we both have experience with digital and print media, so establishing The JRB seemed like a good next step. (Ben founded Books LIVE, South Africa’s equivalent of Publisher’s Weekly, which I edited for several years; and Ben was also the literary editor for the Sunday Times, South Africa’s highest-circulation English-language newspaper.) The idea for The JRB had been percolating in Ben’s mind for some time, and once we started mooting it to our contacts it didn’t take long to find contributors and advisors. We broke digital ground in January of this year and launched in May, which we think was reasonably quick. Our masthead took quite a bit of thought and effort to compile, and includes a number of respected South African, African and international writers, including Rabih Alameddine, Ellah Wakatama Allfrey, Patrick Flanery, Petina Gappah, Philip Gourevitch, Rustum Kozain, Antjie Krog, Bongani Madondo and many others. We’re also honoured to have three writers of international acclaim who are firmly rooted in Johannesburg as our Patrons: Achmat Dangor, Ivan Vladislavić and Makhosazana Xaba. To some extent, in our setup, we’re following in the footsteps of the established city reviews of books, including those in New York and London, but we also want to be known as a more ‘desultory’ publication, in the classic sense of that word: able to leap spryly from one channel to another, developing a unique digital footprint in the process (with print as another potential channel next year). 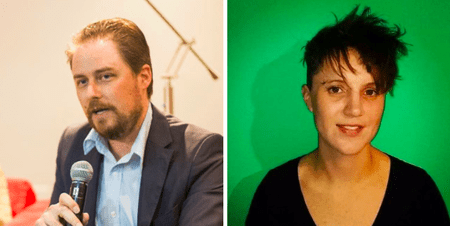 You are filling a void of an Africa-centric (though not exclusive) literary review, but why is that void there in the first place? What kind of landscape is the JRB entering?
The literary landscape in Africa is an extremely busy and dynamic place, with many very popular websites dedicated to showcasing African work. And of course, Africa being quite fashionable at the moment, our letters are well-circulated in the global academy. However, it is not as easy to find the work of reviewers and cultural critics from Africa commenting on new fiction and non-fiction from the rest of the world. What we want to do is to ‘write back’ to the established arbiters of taste, while at the same time treating African literature with the respect it deserves. So one of our main focuses is to amplify critical voices from Africa, ensuring they’re heard in global literary conversations. In addition to discussing African books, then, we will publish serious, lengthy reviews of important international books from the UK, US and elsewhere, ensuring an African perspective is in the mix on these works.

What distinguishes contemporary African literature, especially post-apartheid literature, from its 20th-century counterpart? Do contemporary South African writers have a hard time stepping out of the shadow of Coetzee and Gordimer?
A key problem for books from Africa has always been their perceived literary-ness: it means that the majority of our novels and non-fiction works are saddled with the burden of worthiness, which turns the act of reading them, for many, into something like taking a kind of literary medicine. Across the continent, this is changing: African books are leaving the no-man’s-land of ‘world literature’ and entering commercial genres like crime fiction, Romance, sci-fi, popular essays and so on. At the same time, African authors whose works count as ‘literary’ are enjoying wider exposure in major reading markets: the proliferation of small and independent presses that has happened over the last two decades has ensured that rights deals are being done on an entirely new scale, and thus local and translated editions of African works are appearing everywhere.

South African literature specifically has a reputation – mainly among those who don’t read it – of being dreary, didactic or tediously political (many South Africans will tell you they prefer to read international bestsellers). The reality is much richer and more complex. There is a big market for hard-hitting political non-fiction and local thrillers, and our literary fiction is known for its innovation, having emerged from what might be called ‘apartheid social realism’ into a space that caters for dystopian visions, speculative thrusts into the near future, Afro-punk and counterfactual narratives, while still allowing space for the standard ‘farm novel’. Every year our publishing industry takes new directions, and more and more of our young writers are being recognised internationally. It’s a very exciting space.

Scrolling through the reviews I spot several names I don’t recognize that might in fact be very familiar to African readers. How do you seek to balance an international readership with a continental one?
At the moment our international focus could broadly be defined as being on ‘big books’ – books of any genre that have a significant cultural impact. We anticipate that our reviews of these works, by dint of the books’ very nature, will attract international attention. Our African focus, meanwhile, is both on ‘big’ local books, and on promoting major critical voices from Africa who don’t receive enough attention. We’re hoping our support of these voices – and indeed the fact that we’re intent on helping debut new ones – won’t go unnoticed in the broader African literary community. 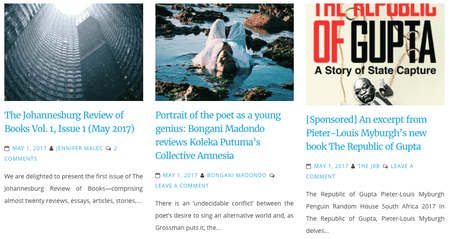 What are some of the stand-out pieces and features of the first issue, and what do you have planned for the second and future issues?
All in all, we published some twenty pieces for our first issue, and feel that each can hold its own, in terms of what other major literary reviews have to offer. What’s especially interesting is the unexpected ‘meta index’ that the pieces in Vol 1, Issue 1 of The JRB generate among themselves: so many have modernity, feminism and other key topics in common that it’s almost like we planned it. We didn’t; the marvelous internal coherence of the first issue is simply (and happily) how it shook out.

Highlights include the inimitable South African writer Bongani Madondo, who wrote a long, serious-but-playful review of the debut collection of a young poet named Koleka Putuma. His piece was very well-received, which was encouraging: it showed us that longer pieces of writing can work in a world of soundbites and listicles. We also published a fantastic interview with Philip Gourevitch on ‘the art of the literary review’ (I see us referring back to it often as a kind of litmag user’s manual); an academic treatment of Grace A Musila’s A Death Retold in Truth and Rumour: Kenya, Britain and the Julie Ward Murder, which a number of people have told us they bought after reading the piece; and a sublime take on Naomi Alderman’s Bailey’s Prize-shortlisted novel The Power.

Without giving too much away, in our second issue we have a wonderful long interview with Abubakar Adam Ibrahim, whose debut novel Season of Crimson Blossoms won the $100 000 Nigeria Prize For Literature; a report by Kenyan literary blogger James Murua on his visit to Conakry, the capital of the Republic of Guinea, for the recent World Book Capital celebrations; and a non-fiction piece by a very promising young South African writer. The new issue will be published on 5 June, the first Monday of the month.