How Post-Apartheid Cape Town Remains Segregated by Its Infrastructure 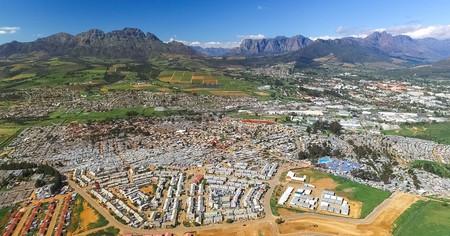 Though two-decades into democracy, many South African cities are still deeply segregated. Nowhere is this more apparent than in the city of Cape Town.

On a clear day, passengers flying in to Cape Town are treated to a dramatic scenic arrival. For first-time visitors, it’s particularly remarkable. Depending on the approach, the flight serves up panoramic views of jagged peaks; pristine farmlands; linear vineyards; vast blue bays; and then a shimmering city — with the iconic Table Mountain backdrop.

But as the landing gear lowers and the cabin crew take their seats for landing, passengers may get a glimpse of an altogether different side of the city — a patchwork of densely packed informal houses on flat, infertile land, far from the commercial hub of the city.

These townships, home to the vast majority of Capetonians and still largely segregated by race, are the legacy of apartheid spacial planning. The apartheid government actively separated races in such a way that white people received the best, most fertile and convenient land and infrastructure. 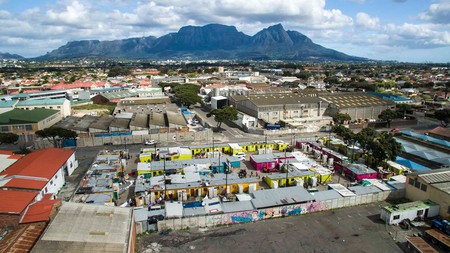 Apartheid was as much about economic divisions as it was social and spatial segregation. Though 23 years have passed since the legal restrictions have fallen, many physical scars and barriers remain in Cape Town.

The drive from the airport towards the city reveals many of these reminders – informal housing turns to city-built low-cost developments, which morphs dramatically into apartments and houses on some of the continent’s most sought after and expensive land, at the foot of Table Mountain.

Perhaps the most jarring example of the city’s divisions is District Six. To an uninformed outsider it may look like prime land awaiting development, which in many ways it is. But this scar on the outskirts of the Cape Town CBD tells a story about a time when black people were forcibly removed from white areas. The apartheid government, determined to purge the best land of non-white people, stormed into suburbs like District Six and relocated thousands to the outskirts of the city. It is here that many families, forcibly removed during apartheid remain, years after the fall of the divisive regime. 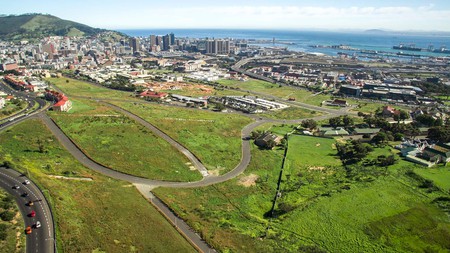 Seeking out less obvious signs of the past

Other examples linger throughout the city, but are perhaps better disguised. The train station in the Cape Town City Centre, for example, is a thriving transportation hub that has its core in segregation. It’s a critical albeit inadequate node of public transportation for thousands of Capetonians who use it to commute to and from work from outlying areas, and is a clear example of apartheid-era architecture. The flat, wide design of the station building was driven primarily by the government of the time wanting to separate races upon arrival at the station.

The station, like most structures in South Africa, has seen refurbishments that plastered over the obvious signs of segregation. And as Next City points out, the inclusion of affordable retail, informal trading and open spaces has gone some way to make it a more inclusionary place. But the core design remains an important reminder of the city’s past. 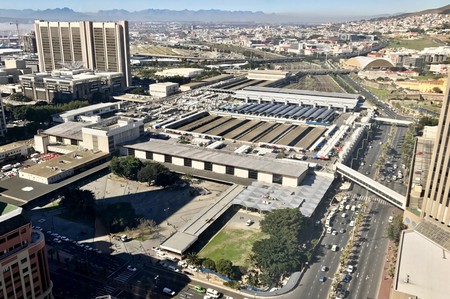 Unequal scenes from above

Though these types of refurbishments go some way towards erasing the past, there are some barriers that are far more permanent and may take many generations to reverse.

As the Africandrone project Unequal Scenes has documented with the use of drone photography, natural and manmade divides continue to separate wealthy and poor suburbs. Golf courses, highways, green belts, and in some cases simply high walls continue separate the rich from the poor.

Though not exclusively a Cape Town or even South African issue, it’s particularly pronounced in the city. Unequal Scenes shows just how close, and yet divided, Cape Town truly is. Africandrone’s Johnny Miller, who headed up the project, says wanted to draw attention to the architecture of apartheid that many Capetonians appeared oblivious to.

“I felt that it had become mundane. I felt that people had developed a certain complacency towards this incredible inequality, which to me was even more shocking than the poverty itself.”

Many of these divides mean the rich and poor live closer than city residents realise, or choose to acknowledge. And given South Africa’s history of economic divides along race lines, it’s no surprise, but no less shocking, that in most cases these remain a form of segregation between racial groups. 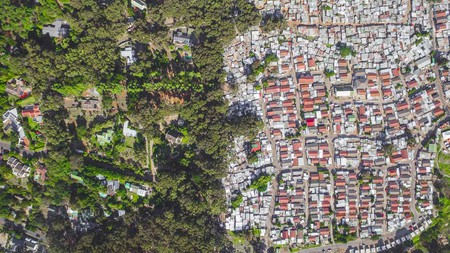 Separated by lack of infrastructure

Though the infrastructural divides made visible by the Africandrone project serve as jarring reminders, it’s the lack of infrastructure that may just be the biggest segregator of a city like Cape Town.

The daily poverty that goes unseen or ignored by all but those who experience it daily is the ultimate legacy still haunting post-apartheid Cape Town.

Both local and national government have policies aimed at overcoming this historical inequality, but in those densely packed neighbourhoods surrounding Cape Town International Airport, for example, many still do not have access to running water, toilets, electricity, paved roads and adequate transport. Which, though easier to ignore for those who do not have to confront it daily, is without doubt one of the biggest dividers that continues to haunt the city. 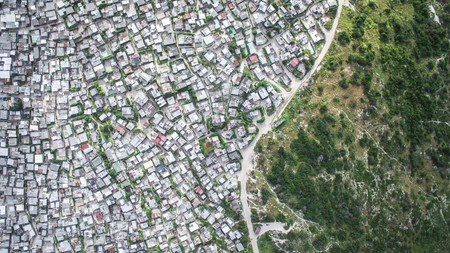