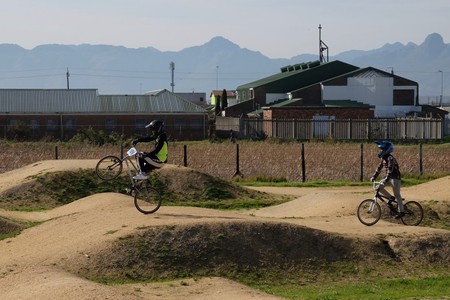 South Africa has a growing problem with education because many children simply do not have access to high-quality schooling and must handle serious lifestyle issues relating to poverty and inequality. However, one non-profit organisation based in the heart of the issue is solving this problem one child—and bicycle—at a time.

There’s a humble non-profit organisation in a Cape Town township that’s produced six BMXers and several pro road cyclists now living in Italy. They also have a team currently making waves on the local road cycling circuit, picking up podium finishes alongside some of the most privileged riders out there. And yet, when young kids come knocking on their door looking to follow in their heroes’ footsteps, Velokhaya is only interested in their commitment to a positive, healthy lifestyle that starts with a commitment to education.

Not everyone who walks through the modest gate at Velokhaya will be a champion. Even though they’ve produced some remarkable success stories, the reality is that most budding pro cyclists, no matter their walk of life, won’t make it to the very top. This is why this unique bicycle-based non-profit has spent years ensuring that anyone who does walk through their Khayelitsha gate feels welcome and accepted while remembering that school will always come first. 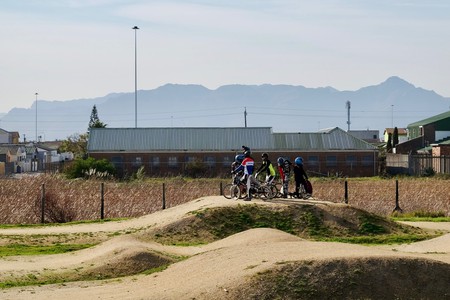 Khayelitsha is one of the largest of townships in South Africa and easily the most populated in the province of Western Cape. The township sits on a desolate piece of land on the outskirts of the city that was previously allocated to non-white people under Apartheid government rule.

There’s little in the way of vegetation. The ground is often fine beach sand and when the wind picks up, it whips across the roads and against the walls of the thousands of small houses and informal tin shacks.

The eastern peaks of Table Mountain serve as a backdrop to Khayelitsha, and in the far distance ahead are the picturesque Hottentots Hollands Mountains. But in the immediate foreground, a crew of helmeted kids line up their small BMX bikes on a metal starting gate on the far side of a dusty track.

They lean forward, resting their weight on their front tires, and someone shouts an instruction above the growing gale. “Riders ready?” And then a dramatic pause before they hear “Go!”

They burst out of the starting gate and then immediately rise and dip over a table-top type obstacle constructed out of the dirt. The youngsters make their way around the banked corners, or berms, and launch themselves over jumps and rollers. The bigger kids stretch ahead while the others struggle to keep up.

In the middle of the pack is Anita Zenani, one of the organisation’s resounding success stories. “She was number six in the world at one stage,” says Shaun Doch, a Velokhaya alumni, as he watches them pedal the track in front of him. “She’s lost a bit of pace. Been studying too hard.” 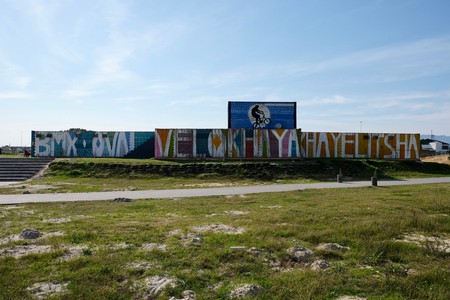 Noise from a tinny public address system somewhere nearby washes over the course. It’s school holidays in Khayelitsha, and there’s an entertainment event going on at the nearby stadium to keep the children occupied. However, these young riders, who could be anywhere on the streets of Khayelitsha or watching a few skits on a stage at the stadium, are instead riding constant loops around the BMX course.

“University is holding me tough this year,” Zenani says after the practice day on the tracks. “That’s why I’ve lost a bit of pace. But I still love being here.” She pauses, and then adds: “BMX has definitely changed my life.”

Though being entrenched in her second year at the University of the Western Cape has meant that she can’t train as hard or compete as often as she’d like, the team behind Velokhaya see that as a mark of success, not one of failure.

Sipho Mona, the general manager at Velokhaya, explains that their goal from the outset was really just to get kids off the street and give them something healthy and productive to do in their spare time. Velokhaya simply aimed to give children bicycles as tools to promote education, and then something miraculous happened: they uncovered raw talent in many of the young riders, which they nurtured over the years. This resulted in fantastic race wins and a few of their members turning professional. “In many ways,” Mona says, “the competitive side of things was all serendipitous.” 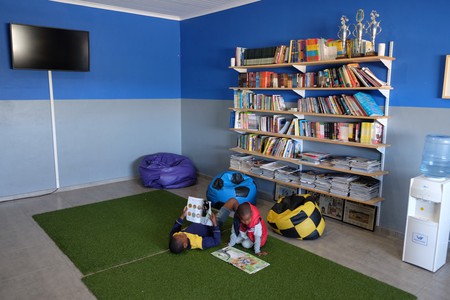 A walk around Velokhaya’s headquarters mirrors this sentiment. There’s a spinning room and a small mechanic’s workshop within the recently built structure, but they’ve dedicated the majority of their floor space to education. A library takes up one wall of their entertainment room, and there’s a large computer laboratory set up on the far side.

“This is purely for educational purposes,” Doch says as he walks me around the lab. “We offer tutorials and extra lessons to the riders. They know they must finish all their school work before they can head out on the bikes.”

We continue walking down the corridor to the mechanic’s workshop in the back. In the back of the small room, Anele Madlolo, the in-house bike mechanic, is quietly threading new brake cables onto a road bike. His eyes light up when he talks about the success behind Velokhaya.

“You know,” Madlolo says, still threading the cable, “People tell us that our riders stand out from other kids in this community. Based purely on how they listen and interact with others.”

Through its holistic approach to cycling, Velokhaya instills riders with a sense of purpose, responsibility, and pride that follows them around in their daily lives, regardless of what difficulties they may face back home.

The riders at Velokhaya, past and present, have a strong connection to the establishment and the greater cause of improving the lives of children who’ve had few advantages in life. Those who have made it as professional cyclists still use every opportunity to praise the work that they do while those still on the ground in Khayelitsha serve as inspiration for the younger riders. 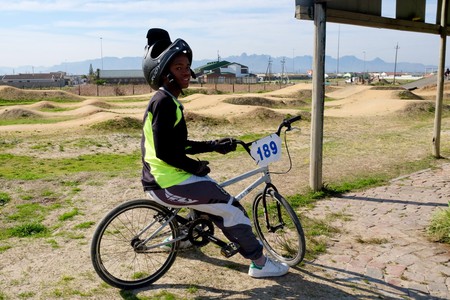 “I see myself as a role model,” Zenani, the hard-working BMX rider/university student says. “Some of these younger riders came to Velokhaya because of me.” Though she may not be high on the current BMX rankings, she takes riding and her role at Velokhaya very seriously. “I motivate the younger riders to carry on with this sport. And the more I talk to them about BMX, the more my passion for it grows.”

Eventually, the young children peel off the BMX track and head on home. Many children, Doch says, have very little to return to. And yet most are beaming and chatting enthusiastically after a morning on the tracks.

When the last of the riders leaves through the gates, the once vibrant and active BMX track falls quiet and only a few people remain on the Velokhaya grounds. Come the same time tomorrow, though, there’s no doubt the committed riders will be back on their bikes, counting down from the start gate, and spending a productive day snaking around the unique BMX track in the heart of Khayelitsha.