A History Of The Cape Town Minstrel Festival 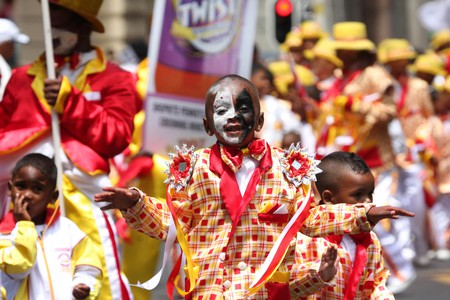 The Cape Town Minstrel Festival explodes onto the streets of Cape Town in a flurry of color, song and dance every year on January 2. It forms an integral part of Cape Town culture and is steeped in history and tradition, dating back to the time of slavery in South Africa. The Culture Trip takes a look at the origins of the vibrant festival and its relevance to South African history.

The Cape Town Minstrel Festival features thousands of flamboyantly-dressed, face-painted minstrels from the colored community of Cape Town (some as young as four), who march through the streets playing musical instruments, dancing and singing on Tweede Nuwe Jaar (Second New Year).

The festival is one of the longest-held Cape Town traditions, attracting thousands of spectators who gather along the roadside to watch the spirited Kaapse Klopse (Cape Troupes) parade from District Six to the city center.

The free festival provides a platform for the minstrels to showcase their talents while dancing to the sounds of the ghoema (drum).

The Origin of the Festival

The Minstrel Carnival, as an organisation, dates back to 1890, but its social roots can be traced back even further to the colonial era in Cape Town.

Dutch colonialists first included slaves in their New Year celebrations in the mid 1800s, giving them a day off on January 2 to celebrate in their own manner. When slavery was abolished in South Africa in 1834, and the subsequent four-year ‘apprenticeship’ ended in 1838, Tweede Nuwe Jaar became a celebration of freedom characterized by street processions, music and song. 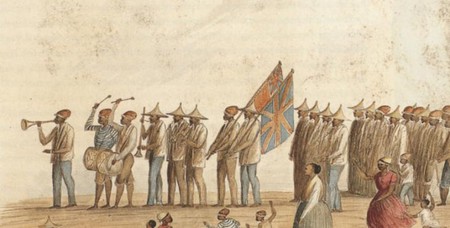 After emancipation, freed slaves and their descendants formed dance bands and were in huge demand across all classes. They played mainly European music, which they had learned from their slave masters, but later developed creole repertoires, mixing Eastern and European musical elements.

The freed slaves’ New Year celebrations, especially among people of color, were significantly influenced by American minstrel troupes who visited Cape Town in the late 1800s.

These minstrels were initially comprised of white performers in ‘blackface’ who would impersonate African-American slaves by blackening their faces with burnt cork giving them the appearance of a raccoon.

Humorous skits, the singing of ‘negro’ songs and playing of instruments such as the violin and banjo were essential elements of their act. They also wore eccentric clothing such as colorful tailcoats to emulate the upper class of society. 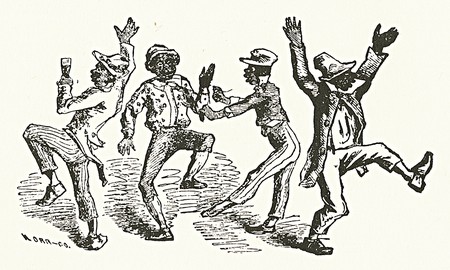 An illustration depicting Bryant's Minstrels, an American blackface minstrel troupe that performed in New York during the mid-19th century

Within this context, they were referred to as coons, a racist term for black people, which became the local festival title (‘Coon Carnival’) for many years until it was changed by local authorities to avoid offending tourists.

Despite the negative connotations attached to this term, many klopse still prefer to use this term even in the present day.

The first formal carnival took place at the Green Point Track in 1907. Eventually, competitions were organised during the 1920s and 1930s, bringing together minstrels, brass bands, Christmas choirs and nagtroepe (Malay choirs). These societies prepared special costumes for the January 2 parade, which became a crucial part of the event.

The modern-day costumes consist of bright suits and hats in official troupe colors. They also tout umbrellas while some of them carry sticks which they stomp to the ground as they sing and dance.

As minstrel troupes are fiercely competitive, costumes and performances remain a closely-guarded secret until the big day. 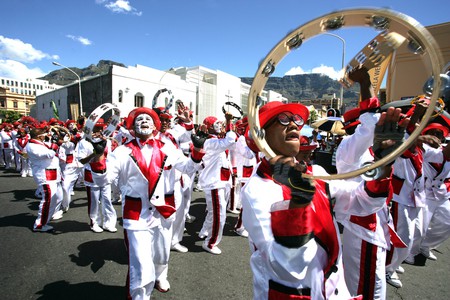 Today the Cape Town Minstrel Carnival Association oversees the organisation of the carnival and competition, which takes place on January 1-2 and every Saturday until mid-February at the Athlone Stadium on the Cape Flats. Troupes are judged on dress, singing ability, and various other performances.

The Minstrel Carnival is a stark reminder of Cape Town’s slavery past and the importance of music and dance as a celebration of freedom. Minstrel troupes give a sense of pride and community to the group members, many of whom come from disadvantaged backgrounds.

The carnival has also played a significant role in addressing racial tensions in the community, and provides all role-players with valuable skills and employment.