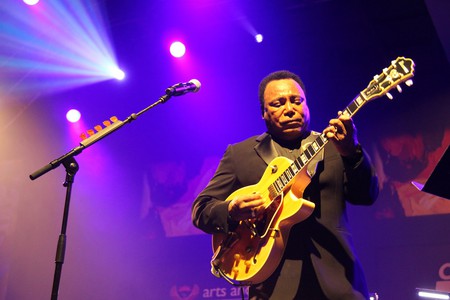 South Africa has had a love affair with jazz since the 1920s. With its roots in the townships of Johannesburg, South African jazz has birthed many iconic styles such as marabi and kwela, and inspired a generation of musician activists during the anti-apartheid movement.

During apartheid, exiled musicians such as Abdullah Ibrahim and Miriam Makeba introduced local jazz to the world. As such, it is fitting that a festival dedicated to this beloved genre is hosted on South African soil.

Now in its 18th year, the CTIJF is a highlight on Cape Town’s social calendar, bringing together thousands of music lovers from around the world to dance and sing along to their favorite jazz, hip-hop and soul artists.

American superstar George Benson has performed several times in South Africa. The Grammy-award winning artist is well-loved by South African jazz enthusiasts for his epic guitar skills and smooth vocals. In 2010, Benson electrified the jazz fest crowd with mega hits such as “The Masquerade,” “On Broadway,” and “Give me the Night.” He also paid tribute to music legend Nat King Cole, which saw him performing with a 28-piece orchestra from South Africa.

South Africa’s legendary jazz singer, known as Mama Africa, performed some of her most iconic songs to an adoring crowd at the 7th CTIJF in 2006. Makeba, who was the first African music artist to win a Grammy award, joked with the audience and gave a spirited performance of hits such as “Pata Pata,” “Nomeva” and “Malaika.” Her performance at the Cape Town Jazz Festival was her last before she set off on her Grand Finale Tour to mark the end of an illustrious 50-year career.

Performing as jazz group BWB, renowned guitarist Norman Brown teamed up with acclaimed saxophonist Kirk Whalum and trumpeter Rick Braun in 2013. Together they rocked the house with a mix of hip-shaking hits, from Michael Jackson’s “Billy Jean” to the Jackson 5’s “Shake Your Body Down to the Ground.”

In 2011, South African jazz icon Hugh Masekela delighted the audience with his unrivaled trumpet skills and magnetic personality. Masekela performed with long-time friend and musician Larry Willis and renowned bassist Victor Masondo. In 2015 Bra Hugh, as he is affectionately known, received the PPL Lifetime Achievement award for his contribution to music globally.

Tribute Mboweni is an up-and-coming jazz singer and songwriter from Mpumalanga in South Africa. In 2016, she enthralled music lovers with her soulful voice, performing songs from her debut album Birdie. Her sound is a blend of neo-soul, pop, and jazz.