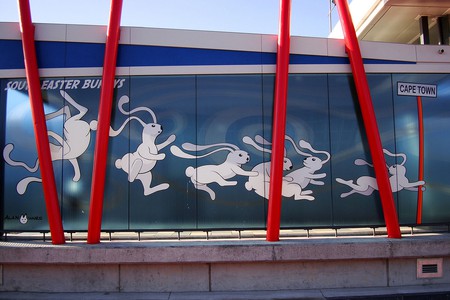 The artworks pay tribute to various aspects of Cape Town life, such as the infamous south-easterly winds | © Warrenski / Flickr

Cape Town’s history with public art is tumultuous, with many installations provoking heated debates and sparking protests. But the city’s most widespread public-art initiative, which allowed local artists to use its MyCiti bus stations as canvases, is more subtle, and far less polarising in its approach.

Even though many commuters who use the city’s bus network on a daily basis may not realise it, every major station in the city has been carefully considered by the country’s most respected artists. The works have different themes, usually tied in to the station’s immediate surroundings, and all have the individual flair of the artist commissioned to do the work. The initiative has successfully shown how public art can improve the lives of those who encounter it, if only for a fleeting moment. 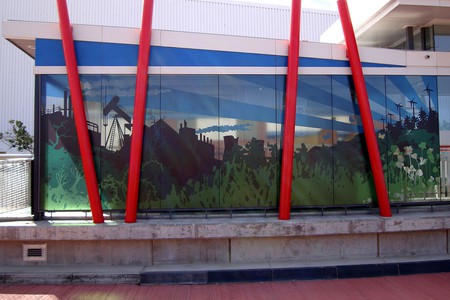 According to Roger van Wyk, curator of the project, the art component of the MyCiti bus project was initiated by its architects, who suggested that art would be important as an aspect of the station design.

Van Wyk then worked with a widespread selection of craftspeople, from sculptors to graffiti artists, to produce unique works that would have permanent homes at major bus stations around the city.

“There’s been a great commitment on behalf of the artists to really try and do something exceptional for the city,” he says. “A lot of them have gone beyond the call of duty to make that possible.”

At least 35 different artists of various ages and backgrounds contributed to the project. Artists had to submit proposals within set themes, which generally related to the location of the stops. They then had free rein to transform most elements within the spaces, from glass dividers and sound barriers to floors, benches and walls. 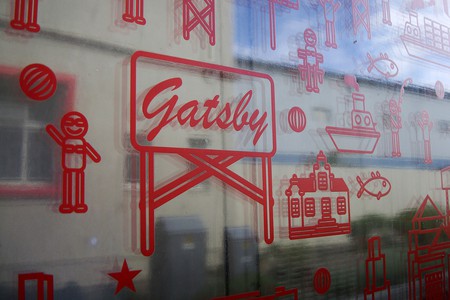 Street artists in the mix

Some artists who participated in the programme, such as Faith47, Tony Coetzee, Ricky Lee Gordon, Wayne Beukes and Thami Mbenekazi, are no strangers to the public art realm – they are celebrated street artists with works dotted on walls all over the world.

Faith47, for example, has received international acclaim for her works, which can be found in cities around the world, including Los Angeles, Vancouver, New York, Johannesburg and Manchester. The same is true for Gordon – his works have appeared in Berlin, Istanbul, Barcelona and Amsterdam.

According to Mbenekazi, who painted the Killarney MyCiti station, he was working on a third-year university project when he heard of the call for submissions. “I gave it a try, and it worked,” he says. “I didn’t know if I was going to get selected.”

Mbenekazi painted cows in bright orange suits, which he says are intended to be a metaphor for family.

“When I started out, my work was purely based on family; in most black cultures families are started, and ended, with a cow. You pay lobola to start a family, to get a wife. And should you lose a family member, you will sacrifice a cow to feed all the people coming to the funeral.” 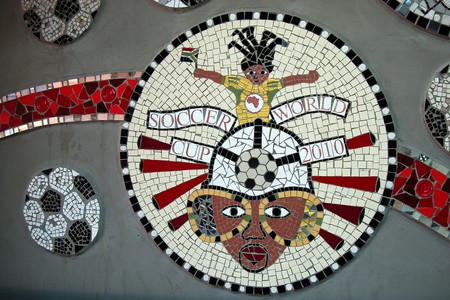 Inclusion of other contemporary artists

Not all the artists are known for street art. Sue Williams, born in England in 1941, but now a Cape Town resident, is a trained printmaker who works in a variety of media. She painted the MyCiti bus stop at Cape Town International Airport, and used the opportunity to offer commuters some insight into the city. According to Williams, her artwork “covers the history of Cape Town, as seen through the eyes of travellers and visitors to Cape Town, from the 1400s right through to 1994”.

Her work includes quotes about food, Table Mountain, slaves and various other key elements of the city, which have all been engraved into the glass walls on the backs of clouds that hover above a panoramic etching of the city.

Williams created the artwork as part of the public-transport infrastructure improvements that were made to the city ahead of South Africa’s hosting of the 2010 FIFA World Cup. “I wanted to make a piece that people who were waiting for the bus from the airport – possibly for the first time into Cape Town– could stand and get some kind of idea of what Cape Town is about.”

The artworks pay tribute to various aspects of Cape Town life, such as the infamous south-easterly winds | © Warrenski / Flickr

Although many of the artworks incorporate important historical and contemporary messages about the city – many deal with topics such as reclaimed land, the changing cityscape and Cape Town’s turbulent political history – others simply aim to make commuting more enjoyable.

Strijdom van der Merwe, who took over Janssens Station, decided to do exactly that with his approach. “Whenever you take a bus, or public transport, part of that will always be waiting. Either waiting for the bus, or arriving and waiting for somebody to pick you up,” he says. “And people are always trying to find a place to sit.”

And so van der Merwe decided to create large metal sculptures of humans sitting on concrete benches, that waiting commuters can share. “It’s a nice way for people to interact with the work and to sit next to it, and maybe they might have a kind of a conversation with an unknown person, while they’re waiting for the bus.”

Although many commuters in Cape Town might not realise it, each MyCiti bus station now serves as a small slice of artistic relief. And whether it’s the subtle nature of the work incorporated into a mundane feature, or the way in which the curator and his or her team implemented it, this is one public art project that hasn’t divided the city.