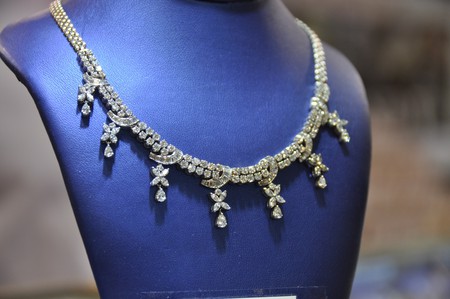 South Africa is renowned for its production of top quality diamonds, platinum and gold that are exported all around the world. This homegrown advantage has enabled many South Africans to establish successful jewelry businesses over the years. Take a look at the top five luxury jewelry stores located in Cape Town.

Shop
Facebook
Email
Twitter
Pinterest
Copy link
Share
Map View
From humble beginnings, Yair Shimansky has established one of South Africa’s most recognized jewelry brands in just over two decades. As a young man, Yair spent two years in Japan where he studied diamond cutting and polishing. The Japanese culture of perfection had left an impression on Yair and inspired him to launch his own line of jewelry. After a year of selling self-designed jewelry at a beachfront flea market in Durban, Yair opened his first store in the early 1990s, where the brand grew into the empire that it is today. With stores across South Africa, Shimansky offers a diverse range of rings, earrings and pendants made from the highest quality diamonds, platinum and tanzanite. Shimansky jewelry has been worn by a number of celebrities including Charlize Theron, Christina Aguilera, Vera Farmiga, Bill Clinton and Nelson Mandela.

Kirsten Goss offers an eclectic collection of diamond, silver and 18 carat gold jewelry. Her diamond range steps away from the conventional, utilizing not only the white diamond but the sleek black diamond as well. Her range includes unique handcrafted earrings, bracelets, necklaces and rings in a myriad of styles crafted from metals and semi-precious stones. The brand also features options to personalize jewelry, such as name and initial engraving as well as birthstone jewelry. The Durban-born jeweler launched her brand in London in 2012 and has since collaborated with local handbag brand Missibaba to open stores in Cape Town and Johannesburg. Kirsten counts Sarah Jessica Parker, Rosamund Pike and even British royalty among her fans. In 2011, she designed pieces for Prince William and Kate Middleton’s wedding.

How beautiful are these Fabrix earnings from @kirstengosslon I'm such a fan! WIN them over on my blog this week… Link in Bio #earrings #jewellery #fashion #kirstengoss #fabrix #win #competitions

Shop, Store
Facebook
Email
Twitter
Pinterest
Copy link
Share
Map View
This luxury jewelry store in the heart of Constantia was established in 1984 by Peter Gilder, after he sought to build his own brand after working for a family friend’s jewelry business. The brand’s reputation for excellent quality and service have spread, increasing demand; today, Peter has a team of goldsmiths who work on-site in the store workshop to produce exquisite ready-to-wear or bespoke jewelry designs. The brand offers elegant pieces crafted from diamonds, gold, tanzanite, freshwater pearls and gemstones. Peter’s daughter, Mandy, also produces her own range of fashion-forward pieces that are available in store.

Shop, Store
Facebook
Email
Twitter
Pinterest
Copy link
Share
Map View
The Kamaldien family has been in the jewelry industry for over 40 years and has built a name synonymous with quality and excellent service. From humble beginnings and many challenges posed by apartheid South Africa, Cape Town-born Yusuf Kamaldien went from being a manual laborer to establishing his own successful jewelry business. Now run by his son, Abdul Kariem, Kamaldien Jewellers offer a timeless collection of jewelry made from diamonds, 18ct gold and platinum. The brand has two stores in Cape Town with its flagship store and workshop located in the V&A Waterfront.

Shop, Store
Facebook
Email
Twitter
Pinterest
Copy link
Share
Map View
Alon Shina African Designs specializes in the design and manufacturing of unique, handcrafted jewelry, utilizing top quality gemstones. Established in 2002, the brand combines African aesthetics with contemporary jewelry trends, resulting in an opulent collection of dazzling pieces. The designs feature colorful gemstones set in 18 or 22 carat gold in an array of styles. Situated at the V&A Waterfront, visitors have the opportunity to be a part of the design process at the on-site workshop or choose from the ready-to-wear collection in store. Alon Shina’s eclectic jewelry has been featured in a number of fashion magazines, including Marie Claire, Oprah Magazine and Glamour.
Give us feedback