The Best Hotels in Plettenberg Bay for Every Traveller 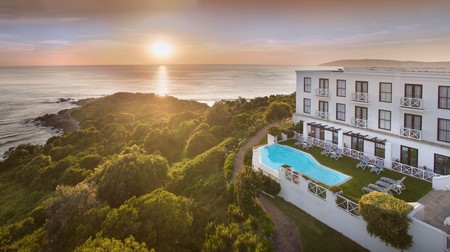 A playground for South Africa’s rich and famous, Plett has both the pristine pale beaches of Formosa Bay with the Outeniqua Mountains, all ready for you to explore from this selection of the best hotels in Plettenberg Bay.

Plettenberg Bay is loaded with history, dating back to the 15th century when Portuguese explorers called regularly, and gourmet attractions, from some of the country’s top restaurants to Mampoer and Witblits distilleries. But its main attraction is its outdoor pleasures – from yachting and cruising to kitesurfing, bungee jumping, abseiling and polo. 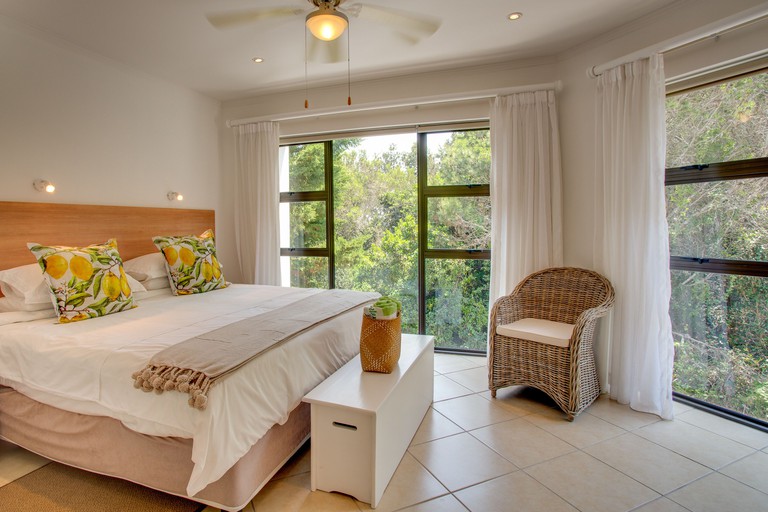 Courtesy of Limoni Luxury Suites / Expedia
View Rooms
Just a block back from the beach, these five luxury suites allow you to self-cater with the wealth of produce available at local food markets and bakeries (the rye sourdough from le Fournil de Plett is a winner), and to take advantage of the great restaurants. Book the penthouse if possible, all blonde wood and pale walls, with a huge patio above the view. It’s also a fitting base for skydiving, blackwater tubing and encounters with eagles at the local rehabilitation centre, or with elephants at Elephant Park.
More info

Named for the Cape Seal Lighthouse at the tip of the Robberg (Seal Mountain), which at 146m (479ft) above sea level, claims to be the highest on the South African coast. The clinker-brick and wood house is a short drive from the beach and just a stroll from the lagoon. It has five rooms with private entrances that open on to a small garden or wooden deck. Friendly hosts Maria and Tony Kinahan will help you plan your day. 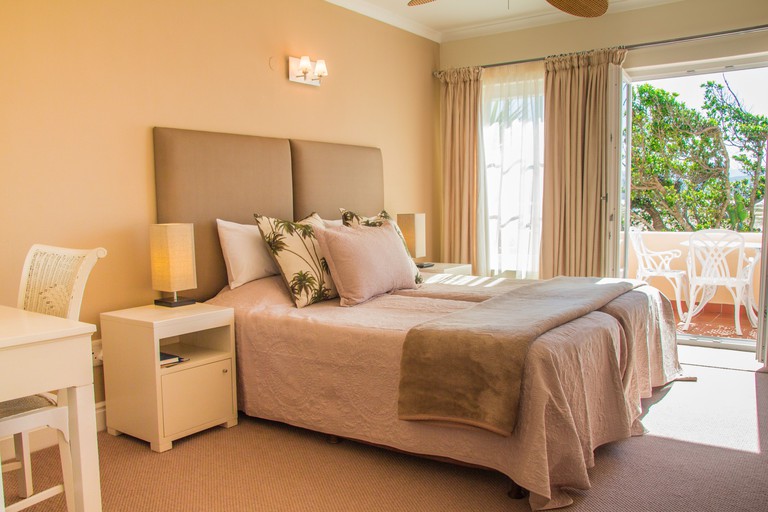 Courtesy of Milkwood Manor on Sea / Expedia
View Rooms
At the end of a cul-de-sac on its own little peninsula, this four-star guesthouse and its terraced Lemon Grass Seaside Restaurant have one of Plett’s, and some say the world’s, most romantic settings, overlooking the sea, lagoon and Tsitsikamma Mountains. Decorated in palest shades of sand, sea and filtered sunshine, with occasional botanical prints, it’s a great retreat for honeymooners and those celebrating anniversaries. Paddle a Milkwood kayak to a deserted beach, and you’ll feel like the only couple on earth.
More info 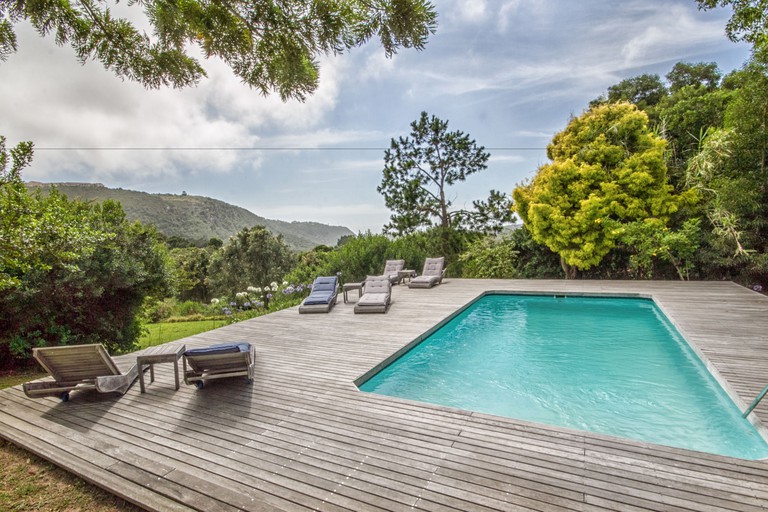 Courtesy of Piesang Valley Lodge / Expedia
View Rooms
Set back from the sea in a garden tamed from six hectares (15 acres) of lush bush, this four-star guesthouse has six log-cabin bedrooms with simple wooden furnishings, earthy rugs and their own entrances and patios for chilling above the valley. Breakfasts are farm-style spreads on the terrace beside the pool, and for suppers, the eateries of Plett are a short drive away.
More info 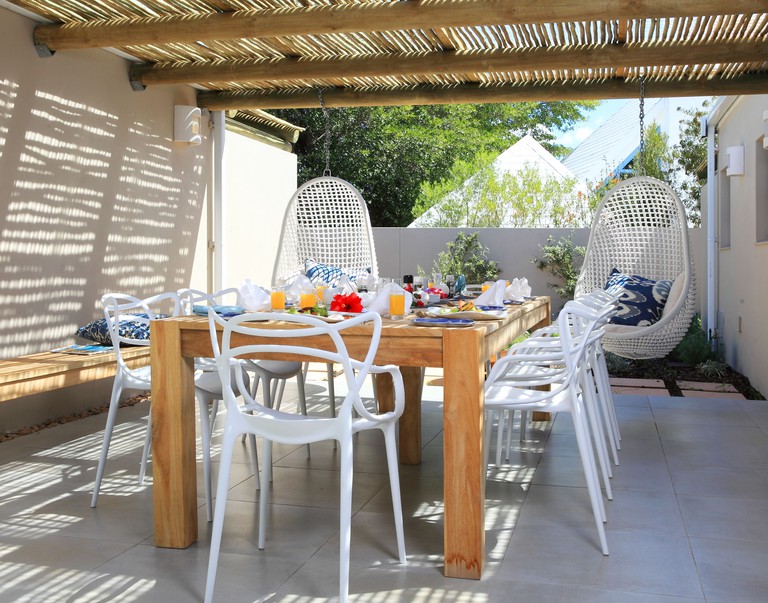 Courtesy of Scallop Lodge / Expedia
View Rooms
This secluded escape is 10 minutes from the Blue-Flag-waving Robberg Beach. It has five airy suites with high white ceilings with exposed wooden trusses, lines as clean as those of the shells it’s named for, natural wood finishes and modern artworks inspired by the surrounds. The dining area opens to a veranda above the rim-flow pool, perfect to unwind after a day at the beach, on the golf course or on a whale and dolphin discovery cruise.
More info 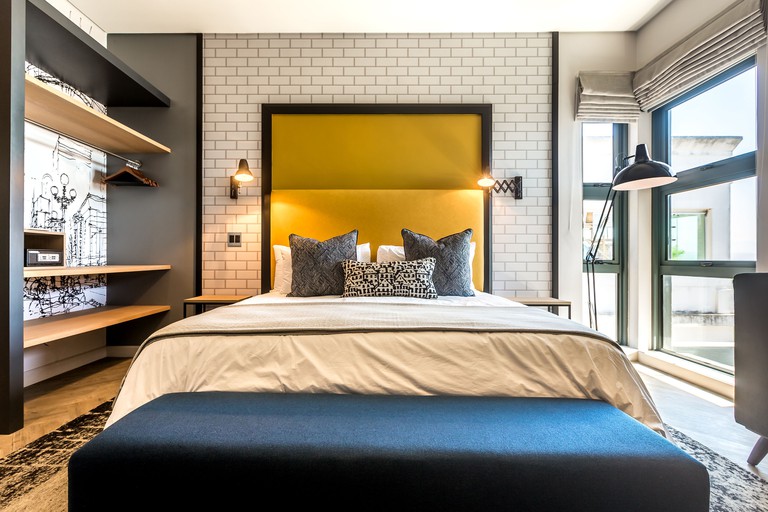 Courtesy of The Junction Boutique Hotel / Expedia
View Rooms
Slap bang in the centre of Plett, this hotel blends brushed steel and industrial chic with rich woods and plush upholstery in bright, open rooms with cool urban views. The smell of roasted coffee beans lurks on the pavement outside, and draws you to coffee bars, restaurants and boutique shops before you head out to the beach or a wildlife adventure. But don’t forget the Junction’s own vibey Café Pure, renowned for its cheesecake.
More info 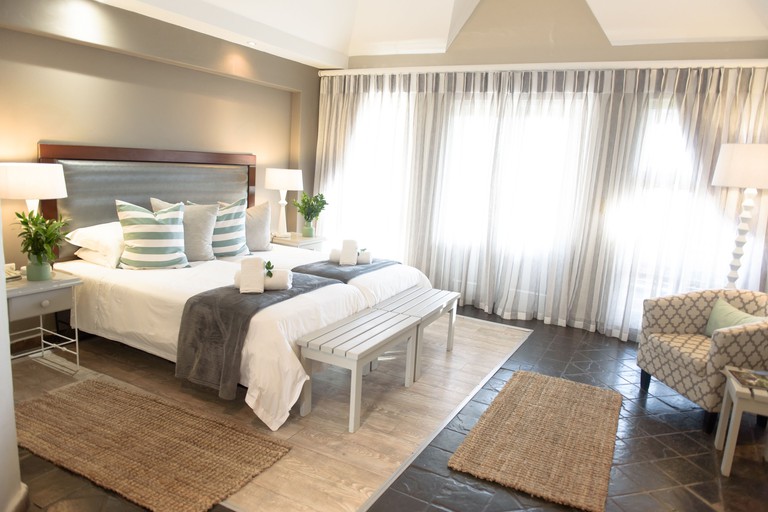 Courtesy of Whalesong Hotel / Expedia
View Rooms
Two dozen thatched rooms are staggered around the rolling grounds, some double-storey, and most with surprisingly contemporary interiors in colours of the sea. Each has its own viewing deck to take in the Keurbooms coastline and Tsitsikamma range. When you’re not out exploring these, Whalesong has a pool and wellness centre, craft gin tastings and an outdoor cinema. The Blue Whale restaurant serves casual meals on a covered sundeck.
More info 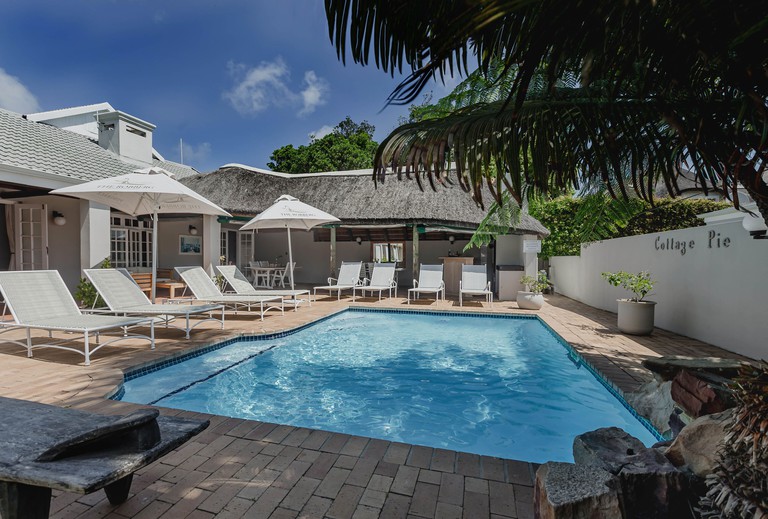 Courtesy of Robberg Beach Lodge / Expedia
View Rooms
What began as the beach home of the owners’ parents on Robberg Beach has been added to over the years, first with the deliciously named Cottage Pie Guest House next door, then several villas. The result is a choice of rooms, from relaxed beach-cottage-style, in its quiet crescent garden, to sleek luxury suites at Beachy Head Villa on a dune above the Blue Flag beach.
More info 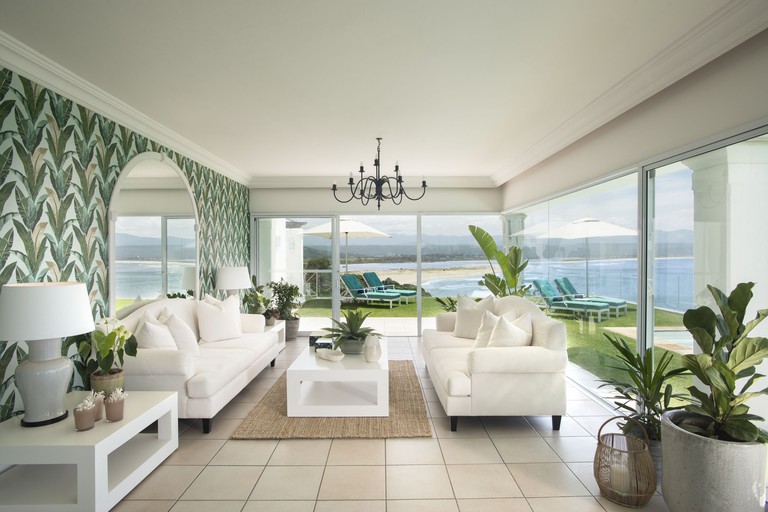 Courtesy of The Plettenberg Hotel / Expedia
View Rooms
Set on a rocky headland in the bay, this hotel gives a choice of 35 rooms and two villas, all with head-smacking views. Ask for Lookout Villa, where dolphins pass by most days, and whales in season. Pampering starts with a welcoming drink and extends to a complimentary minibar and a classic turndown at night. Seafood at the Plettenberg draws diners from around the bay with imaginative sustainable seafood dishes such as Blackened Tuna Tataki. A casual café menu includes “proper” fish & chips, a highlight for many.
More info 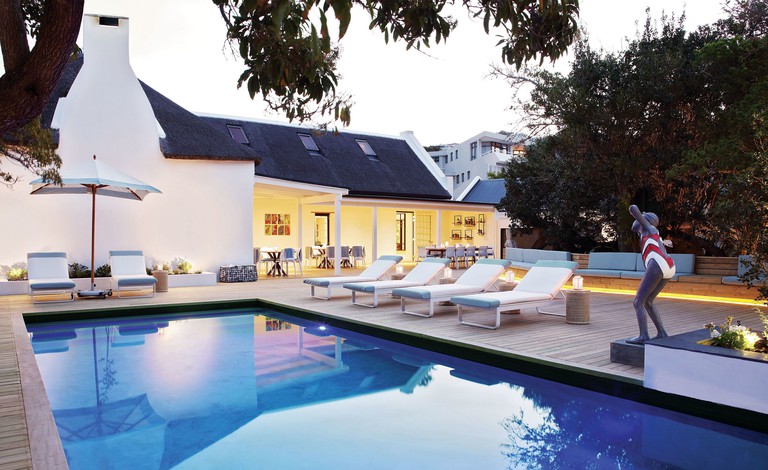 Courtesy of The Old Rectory / Expedia
View Rooms
Built in 1777 in what is now the heart of town, and the oldest surviving building in Plett, the rectory has been turned into one of its most striking boutique hotels. The 18 suites all have king-sized beds with rain showers, outside baths and private terraces or gardens, and furnishings are fresh and funky. Restaurant 1777 is one of the best in the Cape, with seasonal fresh ingredients respected and celebrated by chef Justin Kotze. Midweek meals served under the stars are not soon forgotten.
More info 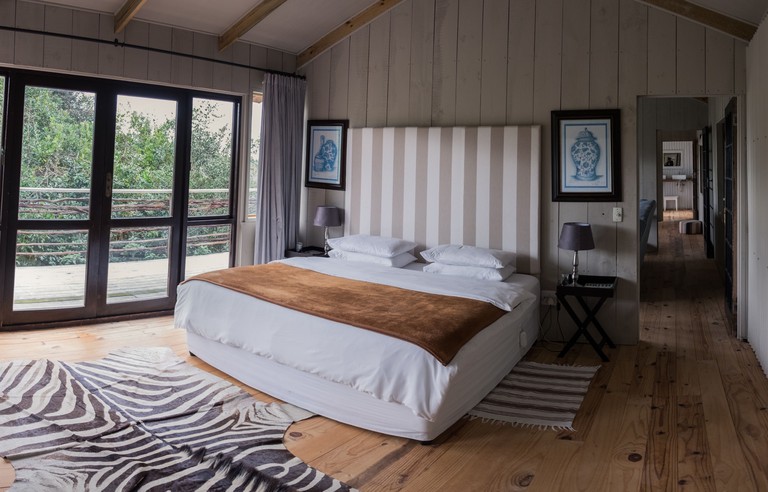 Courtesy of Plettenberg Bay Game Reserve / Expedia
View Rooms
Just a 20-minute drive from Plett is a reserve that’s home to the Big Five, with game drives and horse safaris. The Baroness Lodge is being rebranded as Belle Balance, but hopefully Out of Africa (1985) features like local stone walls, exposed wooden trusses and billowing netting around the beds will remain – along with the dinners served beside the lake.
More info 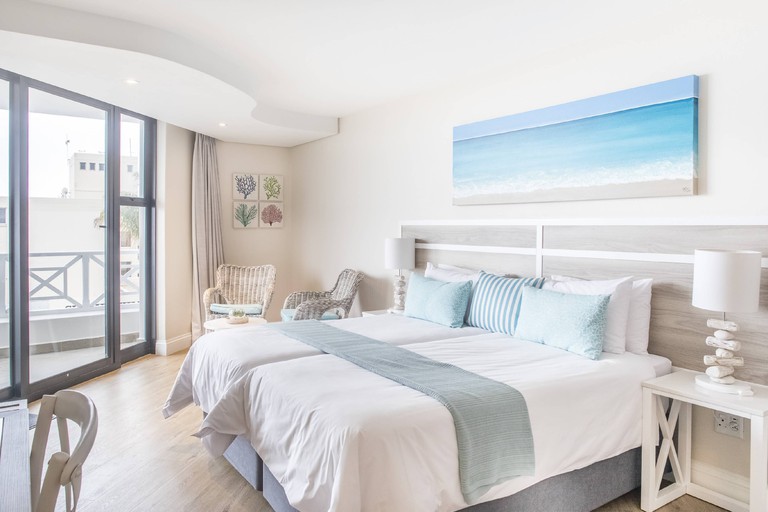 Courtesy of Bayview Hotel / Expedia
View Rooms
The Bayview’s 36 suites range from self-catering deluxe to honeymoon, newly refurbished with king-sized beds in soothing hues echoing the view. In the heart of Plett, it’s a great base for venturing out to the likes of Monkeyland, the world’s first free-roaming multi-species primate sanctuary, Birds of Eden, the world’s biggest free-flight aviary and the Bloukrans Bungy Experience, one of the world’s biggest adrenaline rushes as you leap off Africa’s biggest bridge.
More info
Give us feedback