At the Docks with Cape Town's Kalk Bay Fishermen 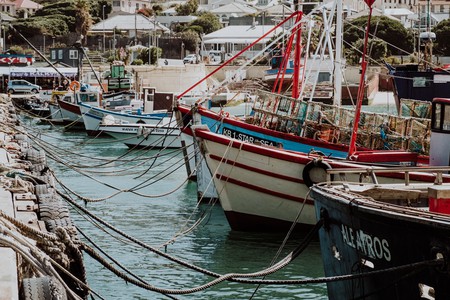 Kalk Bay is known for its faded wooden fishing boats and guffawing seals. It’s a popular tourist stop en-route to Cape Point, but as the fishing industry changes, the quaint charm of the harbour is under threat.

A typical weekday morning at Kalk Bay harbour is a tranquil affair. The small slither of land between the mountain and the ocean is occupied by a few houses, a single lane road and a railway track. Every few minutes, a rusted train jangles past, often with doors wide open and passengers taking in the sweeping view of the False Bay coastline. 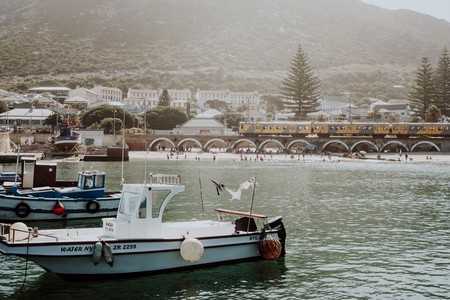 If the weather is fair, many of the licensed boats in Kalk Bay harbour will have departed well before sunrise to lay crayfish traps deep on the ocean floor. Others, a few hours behind, will be gearing up in the early morning light.

Yawning crews climb aboard the brightly painted but weathered wooden boats. They strip down and don thick bright yellow plastic dungarees and rubber boots in preparation for the haul while trading light-hearted South African slang-heavy jabs. 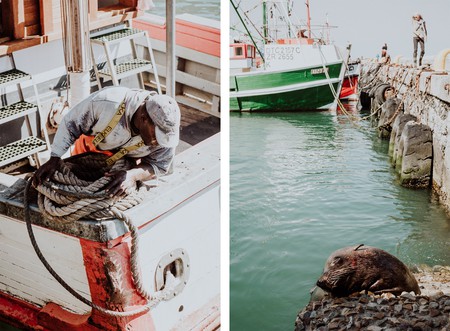 The ship’s engine whirrs to life, interrupting the silence, water spurts out the sides and thickset crewmen begin winding in the ropes that kept them attached to the concrete dock.

With the bait already loaded and the crayfish traps stacked high, all that’s left to do is for the boat to pivot out of its tight parking space and splutter toward the open waters in the distance. 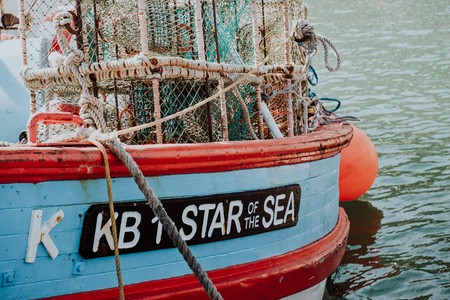 “A lot has changed around here,” says Ken Hart, a fish reseller who’s lived at the harbour all his life. He’s perched on a wooden stool outside a small office overlooking the water. Though his arthritic fingers, deeply-lined face and long wisps of white hair hanging out from beneath a baseball cap reveal something about his age, his quick wit and occasionally foul mouth suggest he’s still very much on the ball.

“I first started coming here, well…” he pauses and looks out over the water. “A bloody long time ago! I was a naughty little bastard. I used to bunk school and come fishing down here,” he chuckles to himself. 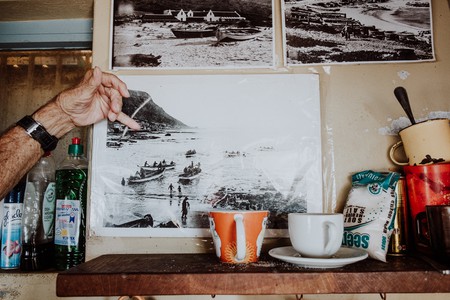 These days, he earns a living as a fish broker of sorts, but with strong winds preventing the ships from heading out to sea, there’s no stock to buy. So on some days, like today, Ken has little to do but sit on his stool overlooking the water.

“Kalk Bay has changed dramatically,” he says again. He looks over his shoulder towards a fleet of approximately 10 low lying fishing boats bobbing on the waves.

“Those boats over there were all line fishing boats,” he says. “They all had dedicated crews and they all went to sea on them together. But now, there are only a couple of crayfish boats that still go to sea.” 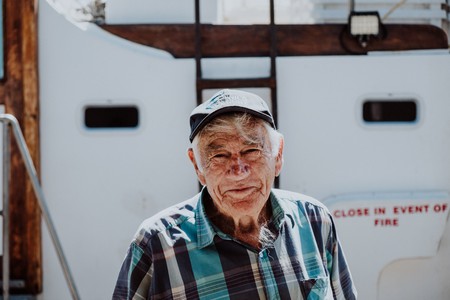 Ken mostly blames declining fish stocks and modern technology for the change. He believes overfishing and flouting of size regulations are major causes of the problem, but also blames the seals and cormorants who feed on large numbers of fish in False Bay.

As if on cue, one of the large seals that had been sunning itself on the pier behind him flops up onto its flippers and waddles toward the parking lot. Although the seals in Kalk Bay harbour are a hit with the tourists, those who work there now consider them a pest. 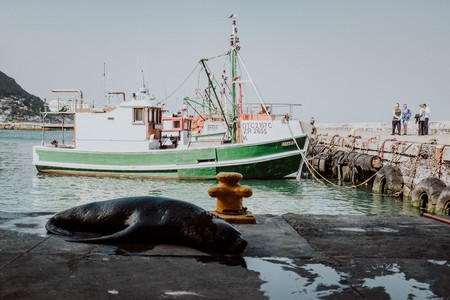 “They are not good,” he says, barely batting an eyelid as the massive creature comes within a metre of his chair. “The day before yesterday, one bit a woman. I’ve seen several people bitten.”

On the other side of the harbour, fisherman Michael Shenxane wanders casually along the pier, glancing into boats. He’s waiting to head out to sea, he says, but the boat he usually works on is up on the dry dock receiving some attention to its hull.

Michael lives in Khayelitsha, approximately 25 kilometres away from the harbour. “I have to leave early in the morning to get here,” he says. “I usually travel by taxi and it’s so expensive – it costs me R20 (USD $1.5) one way, R40 return. But we fish from January to August, Monday to Friday, if the weather is alright.” 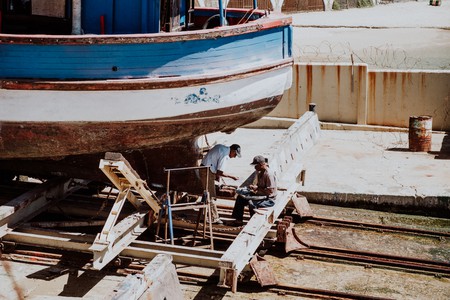 He points towards a stack of the crayfish nets on a bobbing boat nearby. “This is what we use,” he says. “I usually start at 4am – when we need to go out to pick up the nets.”

The nets are essentially large rectangular cages made of weathered nylon twine, with a single narrowing tunnel as the only entrance. Fishermen hang bait on the inside, lower the nets to the ocean floor and wait for unsuspecting crayfish to wander into them.

“Later on in the day, we throw the nets close to Cape Point,” he continues. “If the weather is right, we’ll wait there until the next day.” 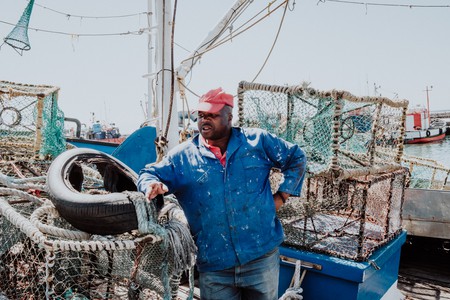 At other times, they will return to the harbour around sunset, where Michael often elects to stay overnight on the cramped boat, instead of heading home. “If I’m working, it’s better for me to stay there on the boat,” he says.”To save money. There are beds and a toilet. And a small kitchen,” he points towards the small living quarters.

“It’s not easy,” he says. “The boat is rolling the whole time. It’s dangerous. If the boat rolls, then there’s always a possibility you can fall in the water.” 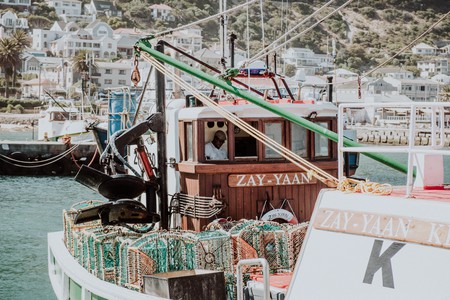 The nets that the crew have to lower and recover are also big and heavy, and a poorly timed lilt or a strong gust of wind can easily knock a crew member overboard.

“There’s a mechanical winch to pull up the net, but it goes straight down to the ocean floor, where often there’s kelp and stones that make it difficult to pull up,” he says. 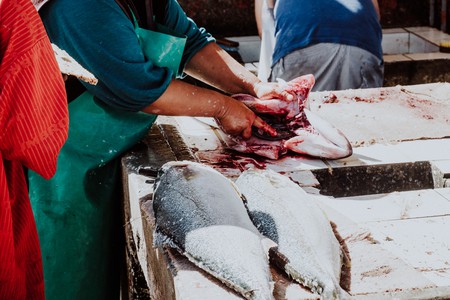 According to Michael, he hasn’t noticed a drop in the number of crayfish they catch. “Everyday, we’re going to catch,” he says confidently. “But the amount depends. Sometimes we’ll pull up the nets and find we’ve only got babies, which we have to throw back.”

Even though Michael works for a flat-rate salary, when they get a big haul, the mood on the boat is celebratory. “It’s like we’ve scored a goal,” he says through a broad grin and raises his fist in the air. 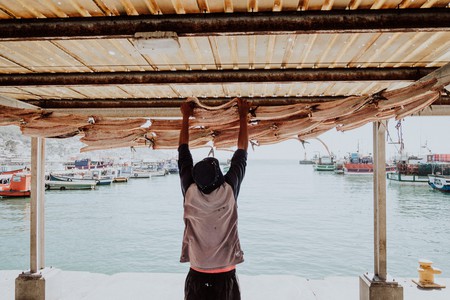 According to Ken, traditional fishermen like Michael are a dying breed, with many shunning the classic approach for more modern methods. “All the good fishermen, the ones who were wide awake, went to the pilchard boats, to the ski boats,” he says. “A lot of the people here, they’re still good fishermen, but the real money is on the ski boats.”

Aside from the crayfish boats, there’s not much money to be made in fishing at Kalk Bay. And although the lilting multicoloured boats are responsible for the charm and romance in a harbour like Kalk Bay, they simply can’t keep up with the modern high-speed equivalents. 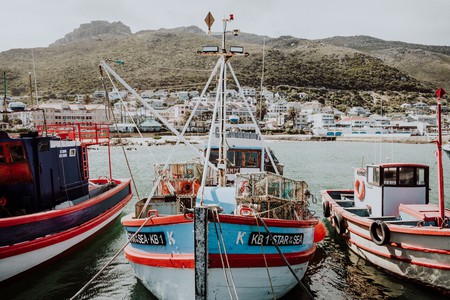 “This is dying,” says Ken nostalgically, sweeping his arm across the harbour before him. “Actually, it’s dead,” he corrects himself. “Not dying.”

But for career fishermen like Michael, there’s a pride about a profession that offers only a liveable salary and that’s undeniably trying. “It’s a hard life,” Michael says as he climbs aboard one of the large crayfish boats to check some of the nets. And then, after some thought and through another broad grin, “It must be! A life’s a life.” 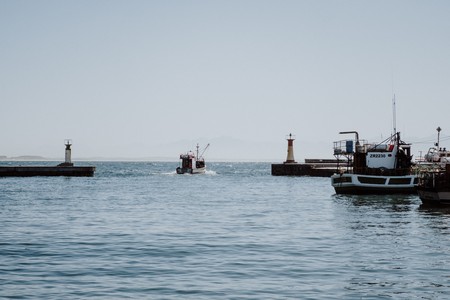