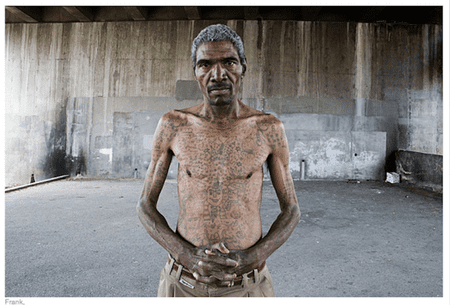 An image from the Life After series | © Artworks Amsterdam /Flickr

Araminta de Clermont’s three major series of photographs are humble and beautiful, and will capture you and take you on a trip into South Africa’s poorer parts of society. de Clermont succeeds in using intimate, individual portraits to describe a broader reality of South African cultures and everyday life, and make it accessible to foreigners.

In her first series from 2008, de Clermont shows tattoos of gang members in South African prisons. These photos are touching images of people tattooing every inch of their skin, including faces and foreheads. ‘Rules against tattooing in the South African prison system are enforced with severe penalties, but tattooing remains a common occurrence,’ says de Clermont. She photographed her models in freedom, when they had been released after years or even decades in prison. Many even faced the death sentence before it was abolished. With Life After, de Clermont does not only show the fate of individual former prison inmates, she also raises the question of whether and how these ‘marked men’ will be able to re-enter society after their release.

Teenage girls from the townships of Cape Town are getting dressed up for the South African equivalent of the prom, the so-called Matric Dance. Families spend what are fortunes to them in order to enable their girls to wear beautiful dresses and get their hair done for this one special day. In her description of the series. Before Life, Araminta de Clermont points out that these girls may in many cases be the first member of the family to finish school as previous generations have been ‘disadvantaged by the apartheid era education system and economic conditions.’ With her arrangements, Araminta de Clermont points out the stark contrast between the girls’ appearance on this special occasion and their personal societal background: the pictures are taken in front of the girls’ respective homes in the most impoverished parts of Cape Town.

The series A New Beginning also focuses on people living in the townships of Cape Town, but this time men are in focus. For these young Xhosa and Sotho men, the circumcision and related practices mark the transition from boy to manhood. These traditional procedures may last for up to six months. When a boy then returns to the community as a man, his position within society will have altered. In order to underline this transition, Xhosa men will dress neatly, boasting blazers, stainless button-down shirts, fancy shoes and hats. Sotho, in contrast, wear traditional capes, beads and hats. In both cases, however, the new clothes symbolize ‘a new beginning’ for the youngsters who are now treated as adults and met with increased respect. Similar to Before Life, the pictures of A New Beginning gain an impressive intensity from the contrast between the prospect of a ‘new beginning’ for the young men on the one hand, and the poverty and hardship in their direct surroundings on the other.