Africa’s Wildest Webcams: How To Plan the Perfect Sofa Safari 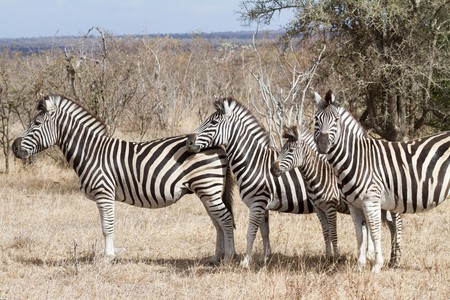 It’s one travel trend that didn’t make 2020 prediction lists, but online animal encounters are on the rise. If you’re stricken with cabin fever or just need some education and entertainment, take a virtual walk into the wild with these African webcams.
Sofa safaris provide one of the easiest ways to travel and a means to connect with nature, albeit remotely. Push a button and switch between sightings of tiny mud-brown hyena pups, playing about their bushveld burrow, and the furry behinds of hungry gorillas, traipsing between lush clumps of vegetation, all from the comfort of your couch. 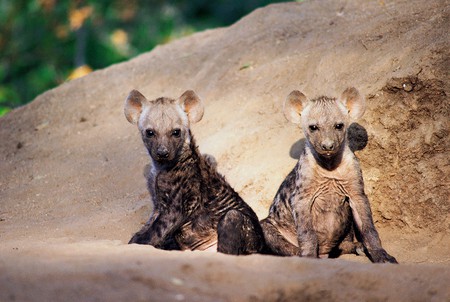 Virtual tourism pioneer WildEarth began recording wildlife for people at home over a decade ago. Started by Graham and Emily Wallington, the company remains at the forefront, with outstanding game drives guided by professionals. “It’s critical that we only share facts and cannot have guides guessing on Live TV,” says Wallington. “We look for charismatic people who have a real and authentic desire to share nature with people all around the world.”

Coupled with progressive technology such as infrared cameras that capture nocturnal scenes without disturbing natural animal behaviour, these wildlife offerings are becoming more and more enchanting. “We’ve had about a threefold increase in traffic since lockdown began and experienced a massive 15 times increase in our local South African audience. In total, we’re reaching between 200,000 and 300,000 people every day,” Wallington remarks. 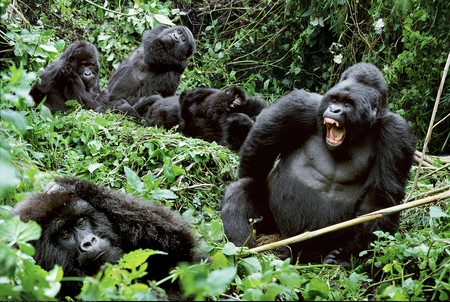 Hopping on to a live-stream game drive isn’t new, but more safari operators are now seeing the benefits of going online. Alistair Leuner, regional general manager for Tintswalo Safari in the Manyeleti Game Reserve, says, “Tintswalo has had a phenomenal response to the lockdown virtual safaris and the idea is to continue with it going forward. It brings thrilling wildlife experiences to many… and our viewers tell us that after watching the thrilling video footage, they are putting a safari on their travel bucket list!”

Wallington predicts an even greater surge. “We expect that these virtual safaris will continue to grow. At the end of the day, people love to spend time in nature, and that’s really hard to do for most people living in cities around the world.”

Singita communications manager Lisa Carey concurs. “Our live safaris were introduced amid the Covid-19 crisis as South Africa went into lockdown, to connect with guests and share nature (and natural healing) during difficult times. We were especially thinking of families confined to small apartments in a city. The feedback and gratitude have been amazing in response to the drives.” 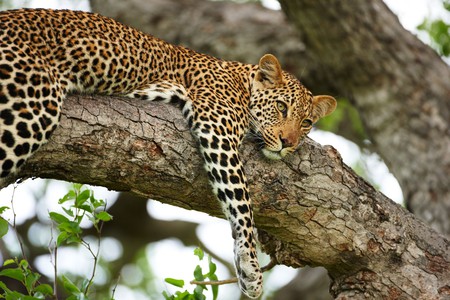 Viewers can easily spend a whole working day in the virtual wilderness. Sip coffee in bed while simultaneously following a leopard around the Kruger National Park. Watch elephants slurp from the waterhole at midday. Learn a thing or two through virtual bush schools held in the Great Karoo, or pour a G&T for an early evening sundowner game drive session.

Without further ado, here’s your hour-by-hour guide (in Central African Time) to enjoying a sofa safari. May it also inspire a future trip to the continent. Tourism helps protect iconic safari animals, and dwindling resources for conservationists normally funded by ecotourism could lead to a renewed threat from poachers.

6am: Sniff out leopards in Sabi Sand Game Reserve

This large reserve straddles the Kruger National Park in the east and shares roughly 50 kilometres (31 miles) of the unfenced boundary, so wildlife passes freely. Sabi Sand also boasts one of the highest leopard densities in Southern Africa (and many super-luxe safari lodges to boot.)

Either tune into the live webcam at Djuma Private Game Reserve, or hold on to your armchair for a wilder ride.

Kickstart the day with a ranger-led game drive in search of fabulous felines. WildEarth has collaborated with &Beyond on a project called Wild Watch to stream (in real time) a three-hour-long off-road adventure through the esteemed Sabi Sand Game Reserve. 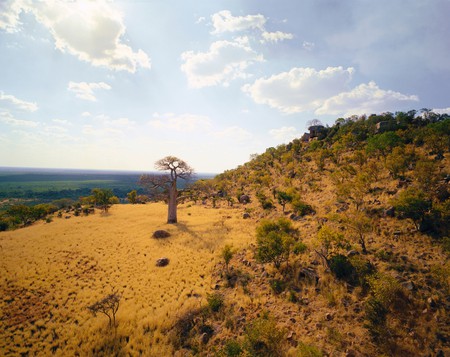 The route never gets boring, thanks to expert hosts, and live stream cuts between several concurrent drives, each following a different sighting.

Virtual travel tip: Head on over to Instagram to join Singita’s Sabi Sand resident photographer and safari guide, Ross Couper. “Giving our viewers a daily, live glimpse of our wilderness areas reminds one of the simplicity of nature,” says Couper. “It’s soul-restoring.” Live streams typically range from 30 minutes to an hour and are held twice daily.

Many of these live events stream from South Africa. The more remote the destination – such as Botswana’s Okavango Delta – the harder it is to get online.

Fortunately, the only five-star lodge in Chobe National Park is close to Kasane. Magnificently perched on the banks of the abundant Chobe River just a couple of kilometres from town, Chobe Game Lodge and its Puku Flats webcam gaze out over impressive floodplains. 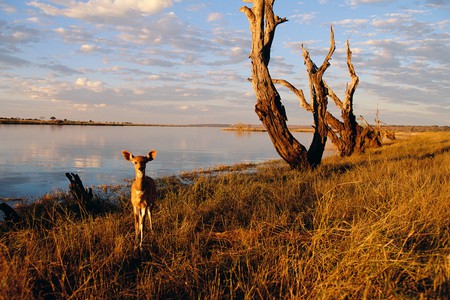 The more remote the destination, the harder it is to get it online | © Greatstock / Alamy Stock Photo

The view offers more of a serene meditation than plentiful animal sightings. However, lodge marketing manager and Botswana local Andrew Flatt recalls some noteworthy occasions. “Not much can beat watching a herd of elephants cross the Chobe River live on the webcams. We’ve also had some awesome lion sightings, including a big male swimming across the channel and into the frame!”

Virtual travel tip: Keep tabs and watch as the Chobe River rises, with 2020 set to be a flood-level year. For those craving action, stop by Camp Kazuma to see if any elephants are around.

10am: Become a citizen scientist for the Karoo

Snapshot Safari, powered by Zooniverse, offers an easy way to contribute to conservation from home. There are thousands of camera traps set up across sub-Saharan Africa that are collecting wildlife images from motion-sensor cameras. Take a break from streaming to help categorise (this means identifying and learning Southern African animal species at the same time) and file the snaps.

Virtual travel tip: Keen to learn more about the bush? Several innovators are making the most of the global lockdown. Samara Game Reserve is offering online bush lessons. Shamwari’s head ranger, Andrew Kearney, is recording short bush escapades from the Eastern Cape, covering everything from tracking to giraffes. Over in the Masaai Mara, Angama Mara’s photographic team, comprising Adam Bannister and his assistant, Mwikali Ndambo, are still sharing sightings from daily game drives. At present, they are some of the only people on safari in the entire Maasai Mara National Reserve.

11am: Spot gorillas in the DRC

Spy the very special eastern lowland (or Grauer’s) gorillas at the Gorilla Rehabilitation and Conservation Education (GRACE) Center in the Democratic Republic of Congo. The sanctuary is a protected fragment of forest stretching across 16 hectares (39 acres), and the camera points to a lush hillside corridor connecting the night-time quarters of rescued gorillas with their open forest habitat. Those who are lucky enough to spy one should savour it. There are just 3,800 individuals left in the world.

Virtual travel tip: Stay online a while. The camera often zooms and switches scenes. These are the best viewing hours, and patience pays off.

Midday: Eye out elephants in KwaZulu-Natal

One of the most consistently productive streams, this camera overlooks the Mahlasela Pan waterhole in Tembe Elephant Park. During the heat of the day, giraffes, impala, nyala and more antelope species wander down to quench their thirst. However, the elephants always steal the show. Tembe is one of the most valuable reservoirs of the big tusker gene pool in Africa.

Virtual travel tip: Sound on! Powered by Africam (also an old virtual hand, founded in 1999) this is one of few webcams blessed with the notes of nature. Hear low elephant rumbles and water sploshing through trunks to the backdrop of bird chatter and occasional impala grunts. 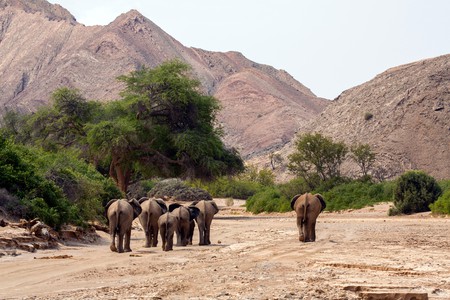 1pm: Camp out in the Kruger National Park

Several South African National Parks have webcams, and there are two kinds: live footage, and still cams that take pictures every few seconds. One of the most predator-rich regions in the iconic park is around Satara Camp, where a popular webcam surveys visitors to the waterhole. Its functionality does tend to glitch, but keep checking in.

Virtual travel tip: If there’s nothing on the live stream, enjoy daily videos uploaded from nearby Tintswalo Safari Lodge. This wildlife management team in the Manyeleti Nature Reserve is always on the beat in the bush and the conservation patrols record sightings, plus exhilarating encounters experienced by game rangers out on patrol.

One of the most popular day trips from Johannesburg, the pretty Pilanesberg Game Reserve is home to the Big Five. Kwa Maritane means ‘place of the rock’ and the lodge features a swivelling live camera, which allows for several animal close-ups as they meander their natural habitat. 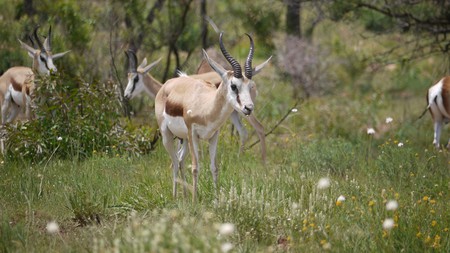 Virtual travel tip: If there’s nobody home in Kwa Maritane, try the Tau Game Lodge in the nearby (yet little-known) Madikwe Game Reserve.

4pm: Peek in on Addo’s pachyderms

Right in front of the main rest camp in Addo Elephant National Park, this webcam is just like real life. The rest camp is home to an underground hide and the camera offers the same viewpoint as that you’d get peeping through the blind. Warthogs often scuffle across the view while breeding herds of elephants line up around the edges, with little ones weaving through giant adult legs for a chance to slurp up water.

Virtual travel tip: Look closely. A large majority (roughly 90 percent) of females in Addo have no tusks. Bull elephants were introduced from Kruger National Park in the 2000s to the widen the genetic pool, and most recently, another individual was introduced all the way from streaming stop Tembe Elephant Park.

5pm: End with a sundowner drink

Time for the afternoon edition. After a day seeking shelter from the hot African sun, predators start to come alive in the late afternoon. Join the action once again with WildEarth. This time, travel to Ngala Private Game Reserve in Timbavati for a change of scenery. Lucky viewers might spot one of the famous white lions.