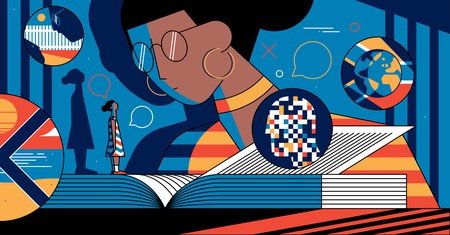 Anyone who grew up under South Africa’s oppressive apartheid regime has stories to tell of its personal impact. But few have been able to tap into this as candidly as The Daily Show host Trevor Noah has done with his bestselling book, Born a Crime.

So authentic and engaging is Trevor Noah’s Born a Crime that it’s being made into a feature film starring Oscar-winner Lupita Nyong’o, and has become part of the curriculum for some New Jersey schools – achievements that appear to have been met with near universal satisfaction from South Africans.

Much of the strength of Noah’s retelling of his childhood is just how relatable the stories are to people from across the spectrum. In an interview with the LA Times, he emphasised that he is relating a shared story.

‘I don’t think the book is a product of myself, but rather me telling a story composed of many stories,’ he said. ‘Part of it is South Africa’s story, part of it is my family’s story, my mother’s story, the lessons she taught me.’

South Africans all have their own stories about how apartheid did or did not affect them, and this book has brought many of those memories and lessons to the fore once again.

Too black to be white and too white to be black

We talked to 31-year-old Quathar Jacobs, who was born towards the end of apartheid and relates to Noah’s difficulty fitting in with apartheid South Africa’s strange racial divisions and definitions. In contrast to what outsiders may have expected, though, it wasn’t only because she was black.

‘In pre-school, I was one of a handful of kids of colour, and in primary school, I was one of just four muslim kids in my grade,’ says Jacobs. ‘The majority of children and teachers at my school were white, and so I picked up a typically “white accent”.’

Jacobs was often mocked for this, especially by family. ‘Being fair in complexion didn’t help, either. Family and strangers called me a “whitie”, and I was embarrassed by my fair skin and accent. Trevor, being a mixed kid, struggled to fit in at times. Too black to be white and too white to be black. I can relate to this to some degree.’

This is an issue that also stood out for 34-year-old Durban resident Candice McGregor. She says it really hit home how, as a mixed-race person, Noah felt that he didn’t properly fit in anywhere. ‘Born a Crime brought up thoughts on race and how, especially in the formative years, race, language and culture are a huge part of identity. And how children have so little agency in this area.’

In spite of the country’s dire political situation, many children who lived through the latter years of apartheid actually had a limited understanding of its consequences. Parents worked tirelessly to protect their children from the reality of the system, and others were simply too young to grasp its consequences fully.

‘I was oblivious to it all, considering that at the school I went to, black kids like me were a minority,’ he says. ‘Whatever my parents said to me about apartheid I wouldn’t understand, though they did say to be careful around white people. It was only in my early to mid-teenage years that I started to understand what they meant,’ he continues, ‘and as I became an adult, it all began to make sense.’

This strange ignorance about the details of apartheid is an experience mirrored by a lot of children, particularly those who went to private or religious schools.

Katy Hindle, a lawyer living in Johannesburg who’s roughly the same age as Noah, went to a convent school with children of all races. She remembers that there were days when black children didn’t come to school due to political tensions and strikes, but she didn’t necessarily grasp the gravitas of the situation until much later.

‘I knew a bit about what was happening, but still lived a very sheltered life,’ she says. ‘I definitely didn’t know or understand just how different day-to-day life would have been for black kids my age.’

Though apartheid affected her family deeply, Jacobs shares a similar sentiment. ‘As a child, I didn’t understand the gravity of apartheid,’ she says. ‘It was only when I was old enough to understand it that my family spoke to me about their experiences.’

For 65-year-old Patricia Mason, who grew up in colonial Rhodesia and moved to South Africa at age 17 at the height of apartheid, it wasn’t until she went to university that she became aware of the extent of apartheid policies. She knew there was an imbalance in her life afforded to the fact that she was white, but it took some time for her to realise the extent of the regime.

‘Growing up, we had black servants who cooked and cleaned for us or did gardening,’ she says. ‘I thought it was normal to have servants and a full-time nanny. I never questioned the extent of racial segregation like this until I was at university.’

Though many children who grew up under apartheid knew little of its atrocities, Noah tells much of his own story through the eyes of a child – a decision that has resonated strongly with readers.

For Mason, reading the story as told from a child’s perspective emphasised once again just how different their lives were from those of white children. ‘Trevor highlights this with his trips to three different churches every Sunday – travelling in an unreliable car or a taxi from church A to church B. Living in the back of a house in the servant’s quarters. Having to walk home from school and being on his own much of the time. Being labelled because of the colour of his skin and deprived of simple things, like playing on a beach or sitting in a park.’

In spite of these stark disadvantages, Noah is able to use the child’s perspective to emphasise how he’s aware that something is different, but he’s not quite sure why.

‘Children view the world differently – with a sense of wonder and positivity – no political ideologies or interference,’ Jacobs says. ‘When a kid grows up struggling, they don’t know they’re struggling, because they don’t know any better. Trevor’s childhood is no different, in that no matter how devastating apartheid was, his upbringing was his [norm].’

For McGregor, Noah’s technique lends the stories a unique credibility. ‘The innocence and candid voice of a child makes people more inclined to take them seriously,’ she says. ‘Children are assumed to have no ulterior motives, so the pureness of heart makes their words hit home a little harder.’

Learning from Born a Crime

Though the stories Noah tells are close to home for many South Africans, a lot of the concepts he deals with are likely to be foreign to many of his new fans, and also to the children who’ll be reading the book as part of their curriculum in the States.

Mason sees the book’s lessons as remarkably humbling and positive, and as evidence that it’s possible to rise out of a terrible situation and achieve amazing things in life. ‘Trevor had the will and determination to believe in himself and achieve the impossible,’ she says. ‘The book shows us not to harbour anger, not to take ourselves too seriously and see the funny side of things, even in the face of a system as oppressive as apartheid.’

For the generations roughly the same age as Noah, it appears to land slightly differently. McGregor hopes that it teaches readers ‘that oppressive regimes affect multiple generations, and it’s not an easy thing to fix. It’s a long road and it requires active participation from all sides. We have to continually step outside ourselves to understand, layers deep, where people are coming from.’

For others, the book is a tribute to many of the unsung heroes of the fight against apartheid, and it’s this aspect that Jacobs hopes is the major takeaway.

When people hear phrases like ‘apartheid South Africa’ and ‘struggle heroes’, it’s usually political parties such as the African National Congress, and key players such as Nelson Mandela, Walter Sisulu and Steve Biko, among many others, that receive the praise – and rightfully so. But for Jacobs, Born a Crime highlighted the importance of the so-called normal people who rose up against the system.

‘I want people to read this book, to see Trevor’s mom as a “struggle hero” too,’ she says. ‘His mother defied the apartheid system and what it stood for by having a “coloured” baby. I want them to learn that this is a story that represents so many South Africans. One didn’t’ need a podium to go against the grain – they had mixed relationships and babies, took to the streets, immigrated and spread the word. I want them to learn that ordinary South Africans did extraordinary things to take a stand and help liberate the country.’