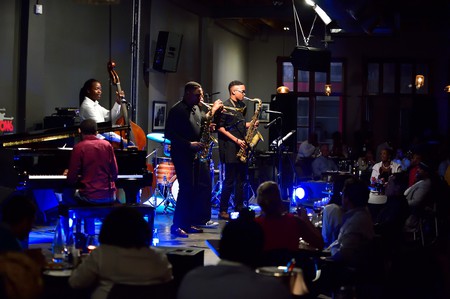 South Africa has a vibrant music scene populated by a wide variety of genres and styles. Throughout the years, the country’s political environment has had a major influence on its music, leading to birth of original genres like kwaito, African jazz and mbube. Discover this and more with our guide to South African music through the decades.

During the 1920s, governmental restrictions on black people increased by introducing a nightly curfew, curbing their freedom of movement which kept the nightlife in Johannesburg relatively small. However this did not stunt their appreciation of music, and a style called marabi emerged from the slums of Joburg, becoming popular music in the townships and urban centers of South Africa. Marabi is a keyboard style that has a musical link to American jazz, ragtime and blues. It was played on pianos at local shebeens (illegal bars frequented by black people who were prohibited from buying and drinking hard liquor). During this time, Zionist Christian churches had spread across the country, introducing African musical elements into their worship. This was the birth of South African gospel music, which remains one of the most popular forms of music in the country today.

By the 1930s, marabi had incorporated new instruments, including guitars, concertinas and banjos, springing forth new styles of marabi. Among these was a marabi/swing fusion called African jazz and jive.

The 1930s also saw the spread of isicathamiya — a style of a cappella singing by the Zulus. The style’s popularity lead to the rise of Solomon Linda, who wrote and recorded the 1939 hit, Mbube (The Lion Sleeps Tonight) with the Evening Birds. The song was later adapted and covered internationally by many 1950s pop and folk revival artists, including The Weavers and The Tokens. Linda’s style of music came to be known as mbube.

By the 1950s, the music industry had diversified greatly as radio broadcasting became available across the country. The first major style of South African pop music to emerge was ‘pennywhistle jive’ (later known as kwela) — pennywhistle-based street music with jazz underpinnings and a distinctive, skiffle-like beat. It evolved from the marabi sound and catapulted South African music to international prominence.

In the 1960s, jive music or ‘sax jive’ continued to be restricted to townships. This genre was later called mbaqanga. The early 1960s saw electric instruments, marabi and kwela influences added to the mbaqanga style, leading to a funkier and more African sound. During this time, mbaqanga also developed vocal harmonies by copying American vocal bands — mostly doo wop. These innovations led to the upbeat mgqashiyo sound.

Consequently, jazz was split into two fields — dance bands and avant-garde jazz inspired by the likes of John Coltrane, Sonny Rollins and Thelonious Monk. The latter field of musicians included prominent activists like Hugh Masekela, Abdullah Ibrahim (aka ‘Dollar Brand’), Sathima Bea Benjamin, Chris McGregor and many others. Due to apartheid, many musicians emigrated or went into exile in the UK and other countries. Around this time, Cape Jazz also emerged — an improvised version of folk songs with references from European and American jazz. Today, Cape Jazz is South Africa’s best jazz export.

By the 1970s, only a few long-standing mgqashiyo groups were well-known. With progressive jazz hindered by government suppression, marabi-styled dance bands became famous in the jazz world.

Ladysmith Black Mambazo, who arose in the 1960s, became one of the biggest isicathamiya stars in South Africa’s history. Their first album, Amabutho (1973), was the first South African gold record by black musicians. The group remained popular throughout the next few decades, especially after 1986, when American musician Paul Simon included the group on his acclaimed album Graceland and its subsequent tour in 1987. The legendary group has since won four Grammy Awards.

Another notable South African story is that of Durban musicians, Blondie Chaplin and Ricky Fitaar from local band The Flames, who were recruited by The Beach Boys and recorded two albums with them between 1970-73. In the mid 1970s, American disco was imported to South Africa, and disco beats were added to soul music. Many bands were also influenced by American and UK punk rock towards the end of the decade.

In the 1980s, alternative rock and gothic rock became popular on the music scene in Johannesburg and Durban. Other notable genres include reggae, bubblegum pop and the Voёlvry (free as a bird) movement — Afrikaans rock music that expressed dissatisfaction with the apartheid system amongst white Afrikaners. The movement was spearheaded by Johannes Kerkorrel and his Gereformeerde Blues Band.

When apartheid ended in 1994, a number of groups emerged with a South Africanized style of hip hop called kwaito. Kwaito is a variant of house featuring the use of synthesizers, African samples and vocals that are generally shouted or chanted. Prophets of da City became the most well-known hip hop crew and kwaito stars included Bongo Maffin, Boom Shaka and Trompies. Traditional Afrikaans music also grew in popularity, as did alternative rock, heavy metal and techno.

The 2000s saw the emergence of blues rock, drum-and-bass, and psychedelic trance, while kwaito continued to appeal to the masses. The resurgence of Afrikaans rock music saw an increase in new artists and album sales during this era. A band of young rockers called Fokofpolisiekar (fuck off police car), became the first alternative rock Afrikaans group, paving the way for other Afrikaans rock and alternative acts. In 2009-2010, two unique and eclectic South African groups emerged, both of whom challenged traditional genre descriptions. As a result, they received worldwide acclaim and significantly increased global recognition of contemporary South African music. The BLK JKS’ experimental Afro-rock blends their Zulu heritage and township origins with modern sounds and equipment, while Die Antwoord challenges conventions of hip hop through house-influenced music and a blend of English, Afrikaans and local slang.

The South African music scene has, to a large extent, been characterized by bands seeking to emulate popular genres abroad. However, in recent years artists have begun to develop a truly original sound. The introduction of the South African Music Awards (SAMAs) has helped to recognize accomplishment in the South African recording industry, and raises awareness of local artists and bands. Outdoor music festivals have become hugely popular and there are currently several annual music festivals catering to different genres and styles of music. These include Oppikoppi, Rocking the Daisies and Woodstock South Africa, to name a few.