5 Anti-Apartheid Songs You Should Know 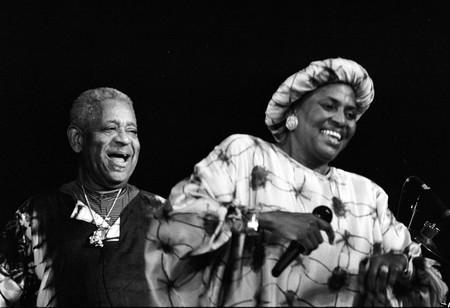 Music played a vital role during the struggle against apartheid in South Africa. Between the 1950s and 1980s, South African musicians produced many powerful protest and freedom songs which motivated, inspired and encouraged the oppressed to never give up. Although there are many famous protest songs, we take a look at five that resonated with people around the world and are still memorable today.

Nkosi Sikelel’ iAfrika (God bless Africa) was originally composed as hymn in 1897 by Enoch Sontonga, a teacher at a methodist mission school near Johannesburg.

The song became the official anthem of the African National Congress (ANC) and a symbol of the anti-apartheid movement. It came to represent the suffering of the oppressed and was considered the unofficial national anthem of South Africa.

Because of its connection to the ANC, the song was banned by the apartheid government. In 1997 — three years after apartheid ended — Nkosi Sikelel’ iAfrika was combined with the former South African anthem, Die Stem van Suid Afrika (The Voice of South Africa) — to form a new national anthem, which is still sung in South Africa today.

Ndodemnyama we Verwoerd was written in the 1950s by the iconic Vuyisile Mini, a singer and ANC member who wrote some of the most influential resistance songs in the early years of apartheid.

The song carried a fierce warning to Hendrik Verwoerd, then prime minister and the ‘architect of Apartheid’. Directly translated from isiXhosa to English, the lyrics read:

Meadowlands, written by Strike Vilakazi in 1956, captures the cry of the former residents of Sophiatown who were forcibly removed from their homes near Johannesburg and placed in the distant township of Meadowlands as part of the Group Areas Act (the segregation of different races to specific areas).

The lyrics, sung in African languages, ambiguously expressed their resistance to being moved to Meadowlands and were cleverly recorded over jive music. This confused the government who interpreted the song as being supportive of their removals program.

Mannenberg is a classic Cape jazz song, composed by famous South African jazz pianist, Abdullah Ibrahim and first recorded in 1974. The renowned song was inspired by the Cape Flats township of Manenberg, one of the areas where many displaced people of colour had been resettled. The song became a symbol of the struggle against apartheid and a beloved anthem of hope for many South Africans.

International artists also expressed their solidarity with black South Africans by recording protest songs. One such artist was Guyanese-British musician, Eddy Grant who produced the reggae anthem, Gimme Hope Jo’anna in the late 1980s. The song was banned by the South African government for its anti-regime sentiments, but still resonated enormously with the people. It reached number seven on the UK Singles Chart, becoming Grant’s first Top 10 hit in more than five years. In the lyrics, Jo’anna was not a woman but a reference to Johannesburg and the apartheid government.