15 Of The Best Beaches In South Africa 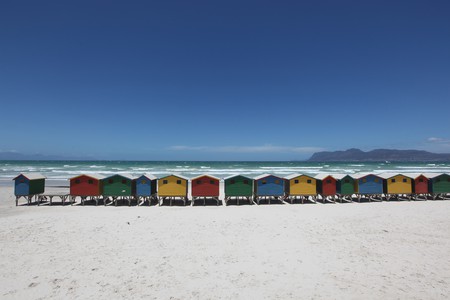 Rolling azure waves, soft white sand and dramatic settings place South Africa’s beaches among the best in the world. South Africa’s coastline stretches for more than 1,500 miles and includes trendy hotspots and vast unspoilt beaches. Many of these beaches have been awarded Blue Flag status, meaning they adhere to international safety, cleanliness and environmental standards. Here are 15 of the best Blue Flag beaches in South Africa.

Camps Bay beach has everything a holidaymaker could want. Sparkling blue sea, soft white sand, palm trees and majestic mountains in the background. Natural beauty aside, you can enjoy a cocktail at one of the trendy sidewalk bars and cafés across from the beach. 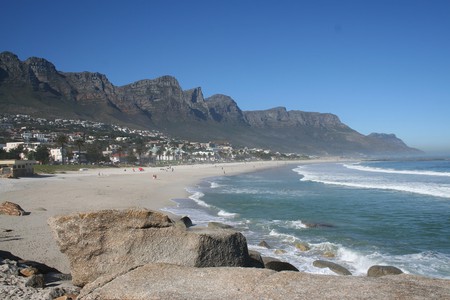 Clifton, an affluent suburb with sweeping views of the Atlantic, boasts four magical beaches simply titled 1, 2, 3 and 4. Steep stairways lead down to the four beaches that are naturally protected from the wind, making them popular with locals and tourists alike. While only Clifton 4th beach has blue flag status, the 1st, 2nd and 3rd beach are definitely worth a visit. 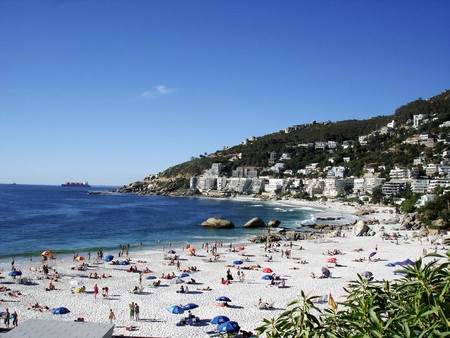 Llandudno Beach is located in a little cove called Logies Bay, overlooked by the exclusive village of Llandudno. The beautiful, secluded beach is quieter than most Cape Town beaches, as it is accessed by only one road and there is minimal parking for visitors. A backdrop of mountains and large granite boulders shelter the bay from wind, making this an ideal spot for swimming, sunbathing and beach games like volleyball and beach rugby. 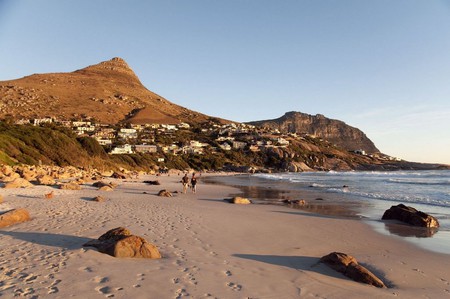 Muizenberg is a long stretch of beach on the False Bay coast, lined with multicolored changing huts. The warm water and good swell make it a favorite spot for surfing and swimming. There are also a variety of beachfront restaurants where you can grab a bite to eat.

This pristine beach stretches for over 11 miles around Walker Bay in Hermanus, known as the best land-based whale watching site in the world. Seldom crowded, Grotto Beach is great for long seaside strolls, swimming, beach games, and for watching the Southern Right whales frolic in the bay from June to November. 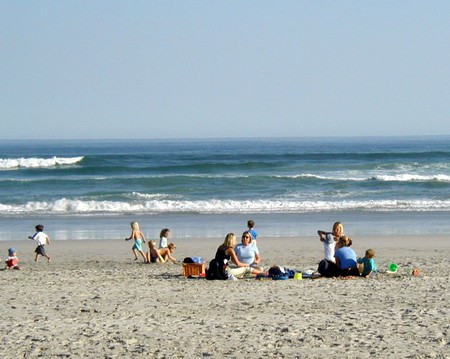 Lappiesbaai is located in the scenic town of Stilbaai along the Garden Route.The peaceful beach hideaway takes its name from the act of hanging washing out to dry on the bushes of sand dunes (lappies is Afrikaans for ‘cloth’). 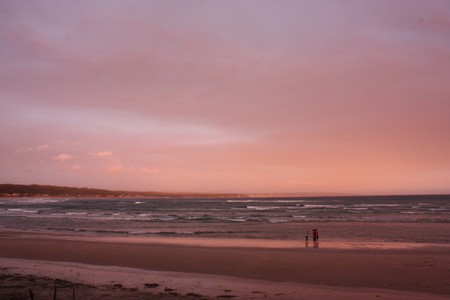 Trafalgar is a quiet, unspoilt beach situated near Port Edward on the South Coast. Snorkelers will be delighted by the 90 million year old fossil beds containing shellfish, fish, plants and petrified wood located just offshore in a protected marine area. At Spring tide, beachgoers are able to explore the fossilized remains in greater detail. The beach is also popular for fishing, swimming and surfing. 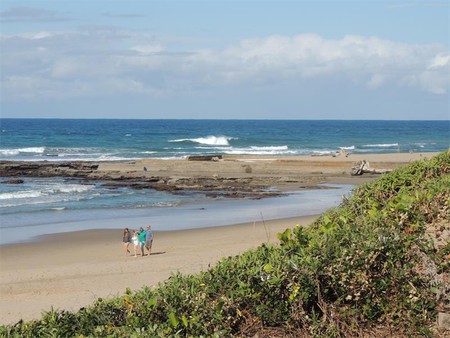 Lucien Beach is located in the seaside resort town of Margate along the Hibiscus Coast, a region famed for its warm weather and coastal resorts. There is a small tuck-shop at Lucien Beach and you’ll find local women selling arts and crafts in the main parking area. The beach is accessible via a steep flight of stairs, but once you reach the beach area with its soft sand and warm water, it’s worth the walk down. The area’s subtropical climate and warm Indian Ocean makes swimming possible year round.

Southport is a beautiful, secluded beach with many shady areas and rock pools, near Port Shepstone. With little commercialization, it’s the perfect holiday spot for families looking to avoid the hustle and bustle of the larger, more popular South Coast beaches. 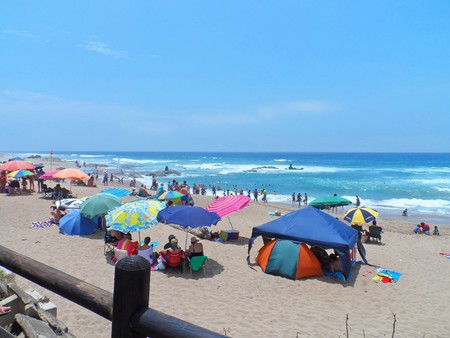 Marina Beach lies just south of Margate between the villages of San Lameer and Southbroom. Though lesser-known than other South Coast beaches, Marina Beach features beautiful scenery and top-class facilities. The beach stretches for three miles and boasts warm water, soft sand, a natural tidal pool and rock pools for the little ones to explore.

McDougall’s Bay is situated on the north-western coast of South Africa, near the diamond town of Port Nolloth. The icy temperatures of the Atlantic Ocean mean this beach is hardly the best swimming spot, but other activities like fishing, windsurfing, kayaking and surfing are popular here. To truly enjoy McDougall’s Bay, go in December when the water is at its warmest.

Port Alfred, on South Africa’s east coast, is an ideal holiday destination for the whole family. At Kelly’s Beach, there is ample space to build sandcastles in the soft, brown sand, and the warm Indian Ocean ensures swimming throughout the year. There is a demarcated swimming area for parents with young children, and boogie boards can be hired to have some fun in the waves. Surfing is also popular here with beach breaks offering left and right-hand waves. 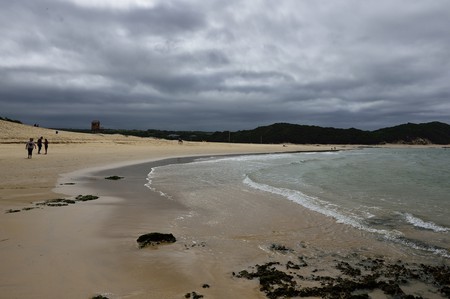 Jeffreys Bay, or J-Bay is the surf capital of South Africa, and one of the top-rated surfing destinations in the world. In July, J-Bay hosts the World Surf League event at Supertubes, a legendary surfing spot located 1.2 miles from Dolphin Beach. There are a variety of fun activities at Dolphin Beach, including a waterpark and mini golf course, surf schools, museums, duneboarding, and kite and windsurfing. Dolphins are sighted year-round and whales appear from July to September. 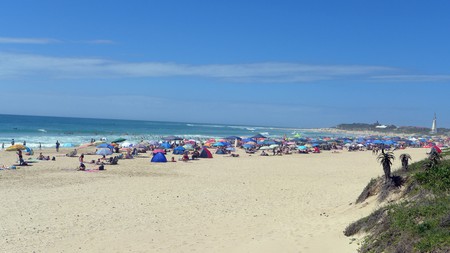 Humewood Beach is South Africa’s oldest Blue Flag beach, and is situated between Kings Beach and Hobie Beach along the main beachfront. Humewood stands apart for its beauty and safety, owing to its calm, warm waters. It’s also a great spot for swimming and suntanning. 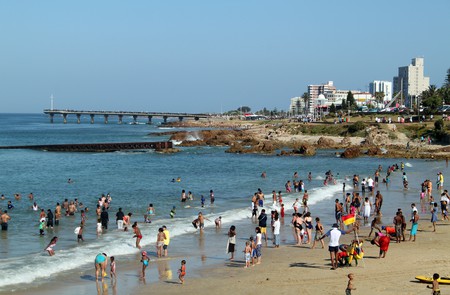 Kariega Beach is situated in the quiet seaside resort of Kenton-on-Sea, between Port Elizabeth and Port Alfred. Nestled between two tidal rivers, the Kariega and the Bushmans, the beautiful unspoilt beach features fascinating rock formations and swirling sand dunes. There is plenty of space for leisurely walks, suntanning, games and building sand castles. Kariega Beach lies in front of a nature reserve, which attracts a wide array of birdlife.