12 Truths About Growing Up in South Africa 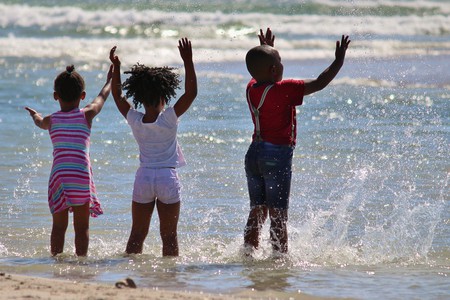 Children in the sea | © Counselling / Pixabay

If you’re a millennial, get ready for a nostalgic trip down memory lane. From much-loved brands that no longer exist to our favorite, and often cringe-worthy, television shows, here are 12 truths about growing up in South Africa.

Chappies bubblegum will always bring up fond memories for any South African. Remember how you tried to spot your favorite flavor’s color, whether banana or grape, through the wrapper before buying? Everyone had a favorite and the best part was reading the facts on the back of the wrapper—pretty much every fun fact you knew was thanks to Chappies.

No millennial will ever understand why the green goodness of Fresca was taken off the market. The slogan definitely got it right as “nothing tastes like Fresca.”

Soda floats were the ultimate treat

Whether you preferred a Coke or creme soda float, this was the ultimate treat. Simply add a scoop of vanilla ice cream to your favorite soda and voila, happiness in a glass. Although normally enjoyed as a dessert, a soda float was even better if you could have it with dinner.

You knew at exactly which time each show started and also watched the reruns on weekends. Television was different back then, no recording and Netflix in case you missed an episode, so each day you’d plant yourself in front of the television and soak in all the shows you so dearly loved.

The toll-gate goodie bags on road trips were fascinating

South African families drive far when going away on holidays, especially those from Gauteng. When stopping at toll-booths those plastic bags filled with maps, a newspaper, and more often than not, candy, was what got you through hours of sitting in a car. And, even better, when Easter or Christmas came around, they included themed candy.

Everyone had a favorite Gladiator

Even though the adventure game show only ran from 1999 to 2001, the program had a cult following and to this day the opening line “ARE YOU READY!” is remembered. Everyone had a favorite, from Granite to Fire, and, if you spotted a contestant in the grocery store (which happened quite often) you just had to follow them around.

The ad, featuring a young boy whose toy car speeds off after being filled up with Sasol’s Super 100, became somewhat iconic in South African advertisement history and watching it so many years after it first aired brings back tons of memories. It comes as no surprise that the ad, created in 1991, was voted the country’s most loved ad in a study by agency Millward Brown.

Whether you loved or hated it, it’s impossible to forget Johan Stemmet’s colorful undercoats. Running from 1991 to 2016, Noot vir Noot was South Africa’s longest-running game show and had a large following of mainly Afrikaan viewers.

Newsreader Riaan Cruywagen graced South African television screens since 1975 and until his final SABC 2 broadcast in 2012, he somehow managed to keep his hairstyle unchanged. South Africans returned to their living rooms each evening to watch the news with this familiar face.

The Carte Blanche jingle indicated the end of your weekend

There’s no doubt why Carte Blanche has the high ratings it does—it’s cutting-edge journalism at its best. As a child though, the notorious jingle meant only one thing: Sunday evening had arrived, and with it, the end of a much-too-short weekend.

Road tripping is part of almost every holiday

South African summers are meant for spending days on the beach and swimming in the ocean, regardless of how cold the water is. Those who aren’t lucky enough to live by the seaside flock to coastal holiday destinations each year. This means loading the car and heading off on a long road trip. Whether traveling to KwaZulu-Natal, the Western, or Eastern Cape, families often spend an evening in a remote town halfway to the end destination, which added to the excitement.

Mxit was the only way to communicate

Mxit was a free messaging platform similar to WhatsApp, and if you had a mobile phone between 2007 and 2015, chances are you had the app downloaded and ready to go. With over seven million active subscribers, there really was no other way to communicate.