10 of Port Elizabeth's Most Impressive Buildings

The origins of Port Elizabeth date back to the 1820s, when the first British settlers arrived to establish a port. The legacy they left behind is reflected in many of the gorgeous and impressive buildings that still stand proud in the city today, decorating the skyline with echoes of the past and standing in stark contrast to the surrounding signs of modernity.

This prominent structure was recently given a face lift but was built between 1921 and 1923 to commemorate the arrival of the 1820 settlers. Standing at just over 50 metres (164 feet) in height, the Italian-styled brick tower boasts a 204-step spiral staircase that leads to a viewing platform. Those who don’t think they will manage the steps, can take the easy way up in the lift. The Campanile also contains the largest carillon of bells in the country, that collectively weigh some 17 tonnes, in addition to its chiming clock. 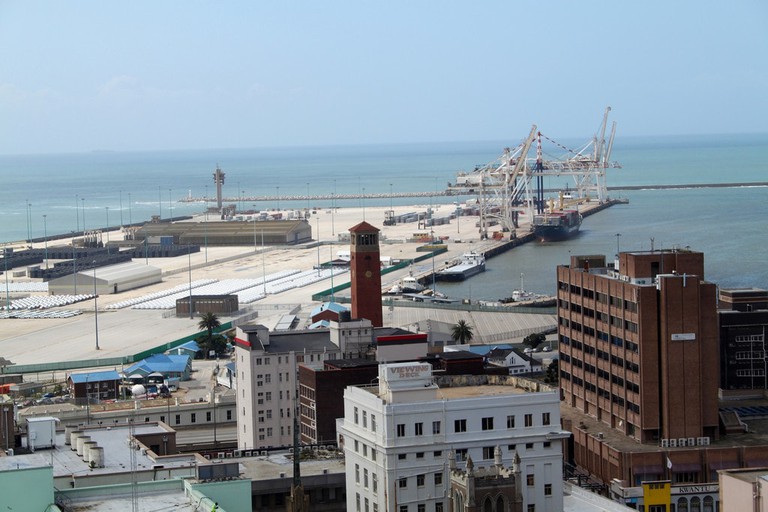 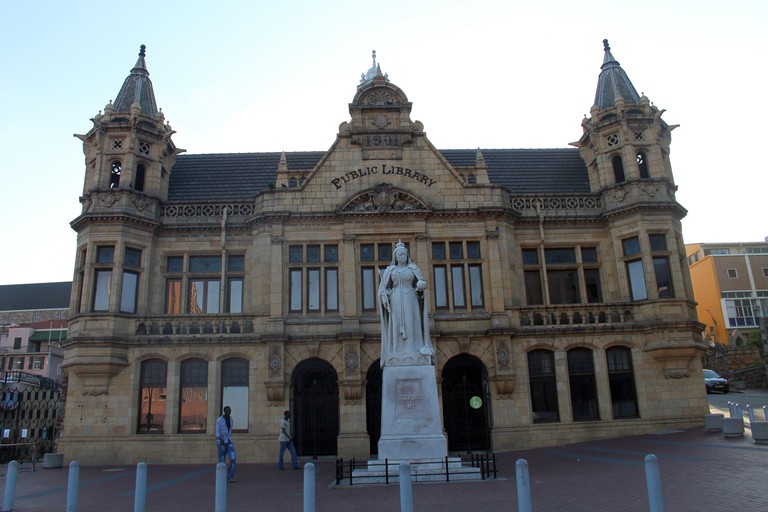 Port Elizabeth Public Library | © flowcomm/flickr
This grand old building was built by architect Henry Cheers of Twickenham, England and is an excellent example of Victorian Gothic Revival architecture. It is the only historic building in South Africa built as a public library that is still used for its initial purpose, and visitors can explore its hushed, book-lined interior at their leisure. The main interior space, the Savage Memorial Hall, features a superb, domed rooflight, stained glass windows, and two levels of narrow galleries running around it.
Open In Google Maps
Port Elizabeth Central Port Elizabeth, Eastern Cape, 6006, South Africa
+27415063466
Visit Website
Give us feedback

Church, Memorial
Facebook
Email
Twitter
Pinterest
Copy link
Share
Map View
The Hill Presbyterian Church is one of a number of beautiful old stone churches that grace the central area of Port Elizabeth and was consecrated in 1865. Designed by architect Frederick Molesworth Pfeil, the Gothic-styled church takes pride of place on top of a hill with views over Algoa Bay, and features a World War I memorial consisting of a bronze tablet surrounded by granite. The hall in the church dates from 1896 and was designed by George William Smith, who was also responsible for the porch that was constructed a few years earlier.
Open In Google Maps
Athol Fugard Terrace, Port Elizabeth Central Port Elizabeth, Eastern Cape, 6001, South Africa
+27415851353
Visit Website
Give us feedback

Also known as the Donkin Street Houses, these restored buildings form a row of terraced houses, each lower than the one preceding it. Although built as individual units, they are remarkably well-integrated into one single unit, and erected on land that was reclaimed from a deep kloof (valley). The unique houses were built between 1860 and 1880 and are now an important landmark in Port Elizabeth, forming part of the Donkin Heritage Trail. Their pretty Victorian and Georgian features are much admired and photographed by visitors to the city. 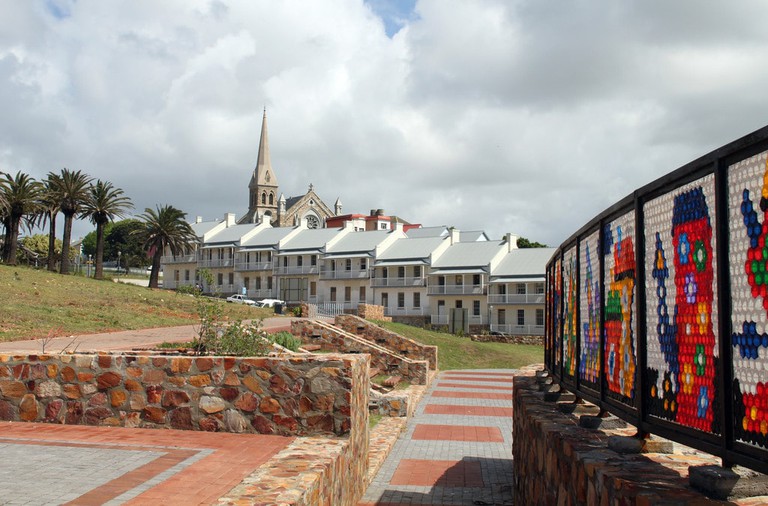 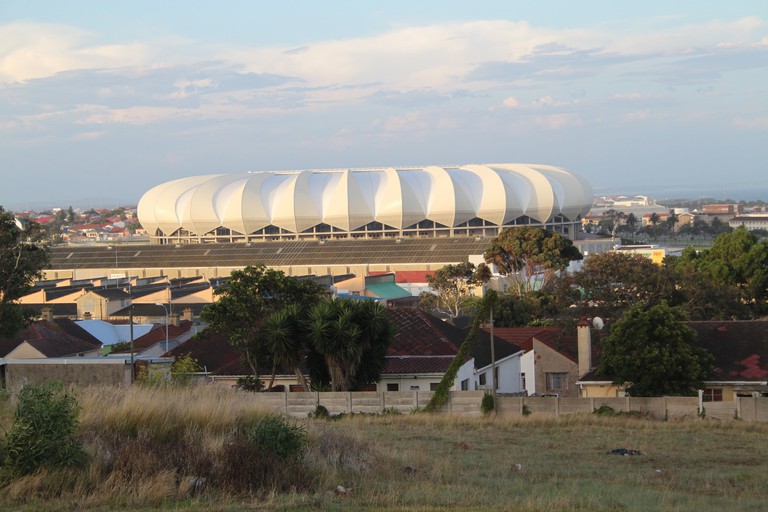 Nelson Mandela Bay Stadium | © flowcomm/flickr
Initially built to host soccer games during the 2010 FIFA World Cup, the state-of-the-art Nelson Mandela Bay Stadium is one of the largest and most easily recognisable landmarks in Port Elizabeth. The five-tier structure lies on the shores of the North End Lake in the centre of the city and offers panoramic views of both the North End Lake and the ocean. The design of the stadium was based on the shape of a flower, with petal-like panels making up the open roof.
Open In Google Maps
70 Prince Alfred Road, North End Port Elizabeth, Eastern Cape, 6001, South Africa
+27414088900
Visit Website
Give us feedback

The Cathedral Church of St Mary the Virgin

Cathedral, Church
Facebook
Email
Twitter
Pinterest
Copy link
Share
Map View
Originally consecrated in 1832, the Church of St Mary the Virgin was less than 70 years old when disaster struck and it burned down in a fire, with only the walls left standing. In the same year, however, the foundation stone for a new church was laid, with the famous Cecil John Rhodes having been said to have paid for the cloisters. Today the choir is the finest part of the church and contains the Bishop’s throne and 22 clergy stalls, in addition to choir stalls.
Open In Google Maps
Saint Mary's Terrace, Port Elizabeth Central Port Elizabeth, Eastern Cape, 6001, South Africa
+27415853047
Visit Website
Give us feedback 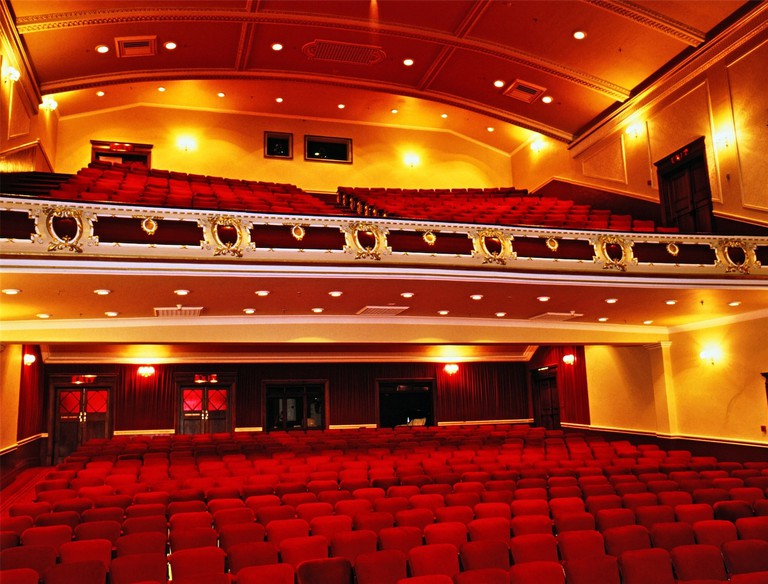 Interior of Port Elizabeth Opera House | © Janek Szymanowski/WikiCommons
The Port Elizabeth Opera house is the only surviving example of a Victorian theatre in South Africa and is still to this day the main venue for dramatic productions in the city. It also holds the title of oldest theatre in the entire Southern Hemisphere, making its architectural style unique and of great historical importance. The Opera House has seen many famous South African artists past through it and is also shrouded in ghostly stories, as it is built on the site of old gallows where public hangings took place in years gone by.
Open In Google Maps
John Kani Road, Port Elizabeth Central Port Elizabeth, Eastern Cape, 6001, South Africa
+27415862256
Visit Website
Give us feedback

Building
Facebook
Email
Twitter
Pinterest
Copy link
Share
Map View
The three-storeyed Eastern Province Herald building houses one of the oldest daily newspapers in South Africa, with journalists and editors still walking through its grand old doors on a daily basis. The publication first took up residence in the stately old building in 1903 and, since its humble beginnings, has evolved into one of the leading publications in the Bay today. The building features a corner entrance and arched windows on the ground floor with ashlar plaster decoration, while the floors above are characterised by heavy cornices.
Open In Google Maps
24 Ring Road, Greenacres Port Elizabeth, Eastern Cape, 6001, South Africa
+27415047911
Visit Website
Give us feedback 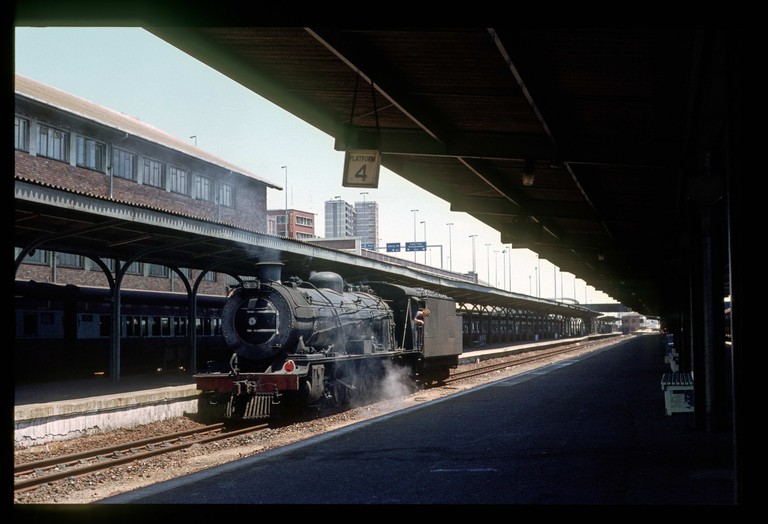 Port Elizabeth Station | © Michel Huhardeaux/Flickr
The Port Elizabeth Railway Station is located in the historical central district of the city, close to the harbour. It was built in 1875 and designed by James Bisset, the resident engineer for the harbour and other public works. In 1893, a cast iron roof was added to the main concourse and the Victorian station received a complete refurbishment in 1985. The original design comprises a double-storeyed building with three arched doorways that led to the booking office and, beyond that, to the platforms. Except for some internal alterations, the external architectural features of the buildings haven’t changed much since the turn of the century.
Open In Google Maps
Settlers Highway, Port Elizabeth Central Port Elizabeth, Eastern Cape, 6001, South Africa
Give us feedback 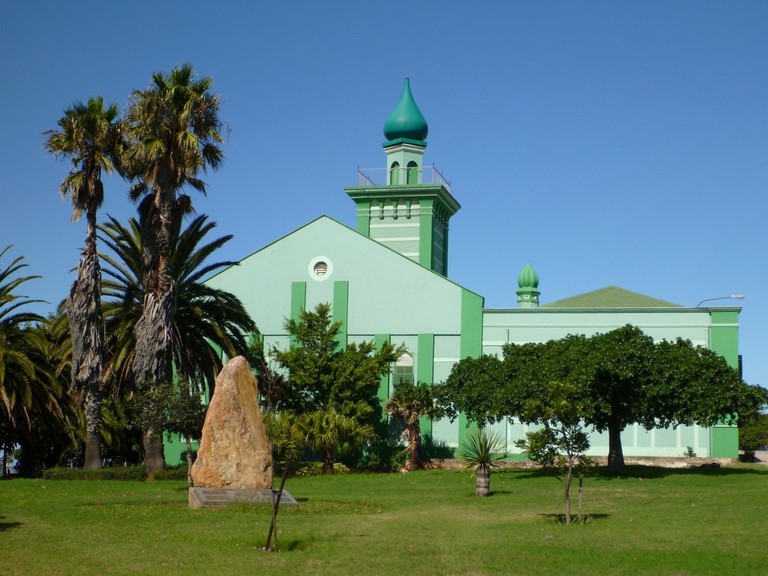 Port Elizabeth Station | © Michel Huhardeaux/Flickr
The Masjid-ul-Aziz Mosque, commonly known as the Pier Street Mosque, is a landmark that all Port Elizabeth residents are familiar with, as it stands out brightly in all its green glory, adjacent to the busy Settlers Freeway. The mosque was officially opened in July, 1901 and was almost destroyed during the days of Apartheid when the Group Areas Act was declared. Fortunately the matter was taken to the United Nations, where Islamic countries prevented its destruction and the historic mosque remains in daily use as a place of worship by the Muslim community.
Open In Google Maps
South End Port Elizabeth, Eastern Cape, 6001, South Africa
Give us feedback
Give us feedback